The History of Candy Corn...

...according to Fatty Girl.

Many of the newcomers died during the first winter so the native people taught the newcomers how to farm on the rich soils of the new world land.  At the end of the summer, the newcomers invited the natives to a feast bearing many gifts from the land.  The natives brought deer on which to feast as well.  The newcomers' sugar supply was very low so there were no pies or cakes that year.

The next year, there was a severe drought and the harvest was not very successful.  In the fall, the natives taught the newcomers to watch for the sun dog - a sign of moisture to come.  The newcomers faithfully watched for the sun dog all through the fall and winter.  It often appeared in the late afternoon and then would disappear.

In the spring, the rains came and soon there was a bounteous harvest again.  That fall, the newcomers invited the natives for another harvest feast - the feast of the Sun Dog.  They gave thanks to the natives for their wisdom and knowledge.  In their honor, the newcomers presented the natives with a special, small, sweet gift made from the sap of the trees and the sugar from their beets.  They named it Candy Corn because of the rich bounty of corn they received after seeing the Sun Dog in the sky. 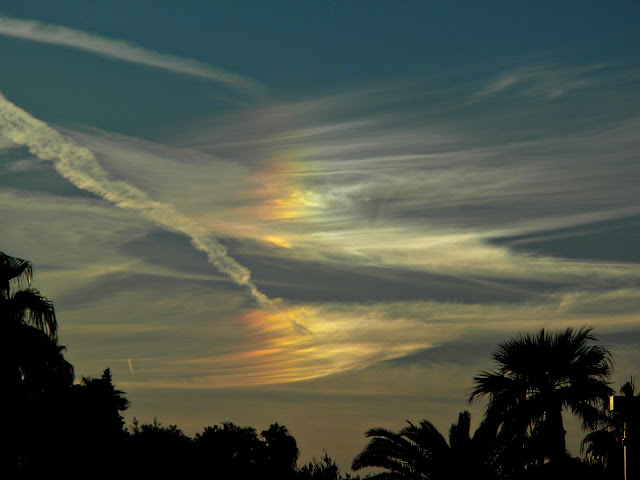 Okay, okay, so that's not really how candy corn came about, but as I was driving home from work tonight, there WAS a really cool sun dog in the sky and it looked just like candy corn colors to me and soon my mind was creating the nifty little story above.

Today was fun-filled after last night's little surprise.  I spent part of the day filling out fraud alerts for my credit reports, contacting the companies where my card was used to ensure no accounts were set up in my name, and generally just getting irritated that someone had the nerve to do this.  And, to top it all off, I ended up having to go back to the dry cleaner to pick up Melon Man's other shirt.  I just looked at the kid and he acted a little nervous, but I didn't let on that anything was wrong.  I stopped to get gas today and had to use my debit card.  That sucked.  I love using "my" card.  It's the best.  Why not use a card that pays YOU back for using it?  LOVE IT!!!  Oh well, hopefully our new cards will arrive tomorrow and we'll be back to normal.

It's warmed up again - that wonderful Indian Summer as they call it.  The nights are quite cool though so that is good.  When I left for work this morning at 7:30, it was only 54 degrees.  I bet it was probably around 48 or 49 just before the sun came up.  No consolation to my fam in Utah, I'm sure, where there is snow on the ground right now, but it was cool to us, nonetheless.  :)