Today's Gratitude: Cold Water. For years, I've wanted to do a scrapbook page about cold water. Why? Because there are only about 3 months a year that we get cold water here in Arizona. And I relish every single one of them. Growing up, I had cold water year round. It came down from the mountains, into the valley's water tables underground, and was cold and refreshing. When I moved to Arizona, little did I know that even though the water tables below the ground surface held all the water we use every day, they didn't keep it cold since we were in a desert! There is just nothing like brushing your teeth with warm water for months on end. Ew. But then, as the winds start to dabble a little in the fall and the leaves start to "try" to turn, there is a single moment every fall where you realize - oh my word, this water is cold today! And then, you know...fall is here and you can plan on cold water for about the next 3 or 4 months. Unfortunately, the cold water goes away as the Arizona heat begins to arrive, but at least it's subtle.

Journal Entry: This has been a long week. I worked over 60 hours and I'm exhausted. I slept about 4 hours per night all week and last night, I actually slept about 9 hours. It felt really good. I'd like to sleep in again tomorrow and Monday as well, but my body just wakes up at 5 a.m. and says to get up. I try to go back to sleep, but sometimes, I just can't. I'm tired enough from this week though that hopefully, it won't be too bad the next two days.

All this week, I have been working on my first quarter forecast (budget) and our monthly variance reports. It's unfortunate that they fell at the same time because it requires a lot of extra hours. I have a peer in Ohio that has been struggling with her budget for a number of reasons and it looked like I was going to have to go to Ohio either at the end of this week or for most of next week to help her. Because of all of this, I had to bow out on going to California for the weekend for Adrianne's bridal shower and temple trip. I was bummed because I really wanted to go - not just for the shower or to go with Adrianne to the temple, but because I've really been wanting to go to the temple again. It's been a while and I'm so missing it. It's so incredibly peaceful there and I've really started to learn so much of what our Heavenly Father has in store for us. Anyhow, about 30 minutes ago, I realized that if I left now, I could make it to Cindy's in time for the shower. However, I'm not ready to go anywhere outside of the house today and I haven't talked to Clint about it either. I don't think he'd be very happy if I just left and drove out there by myself. I could call him at work, but still, I don't think he'd want me to go by myself. So, sorry Adrianne, I would have loved to have been there!

Today, I'm going to add one more blog entry that I've been wanting to do for a while now, but have been puting it off because it's very emotional for me. I just need to do it though. Then, I'm going to clean my house. I'm not going to sit here and do thing after thing on the computer like I usually do on Saturdays.

Tomorrow is church and I'm glad it doesn't start until 10. It will give me an opportunity to sleep in a little rather than taking a nap during the afternoon which wastes too much of my day (because it's never a nap - it's a full 3-5 hour sleep because I get so tired lately!).

Monday, Dog and I are headed out to go fishing while C is at work. We bought me a girly tackle box and a new pole and reel that can be used for normal fishing or actually appears to be good enough to go deep sea fishing so the next time we go to San Diego, I won't have to rent a pole again. Speaking of DSF in SD, here is a picture from my first (and only, so far) DSF experience (seriously bad hair day). This was the only fish I caught that day - a lousy barracuda. It didn't even put up a fight until the last 5 seconds of its life. Anyone have any good barracuda recipes? It's still in the freezer... 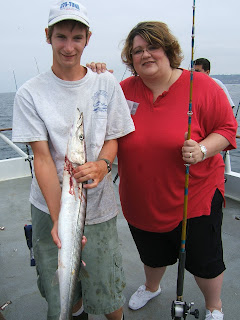