Melon Man picked me up from work around 4:30 today and we raced down to Ashley Furniture in Avondale to look at the pieces from the Cedar Heights collection to make sure we liked them. We walked into the store and GRATEFULLY we were not pounced upon but rather politely greeted and allowed to wander on our way. Immediately, as I was talking with Maria as we walked in, Melon Man saw a table set right by the front of the store and was checking it out. I saw it out of the corner of my eye and loved it right away. I couldn't wait to get over there to see it! As soon as I was finished talking with her, I went right over and fell in love! I wasn't a big fan of the china hutch, but I truly LOVED the table and chairs. Big, bulky, black and wooden. Delish! (Although this pic just doesn't do it justice!)

Melon Man and I walked around the store looking for the Cedar Heights group and never saw it, even though we'd been told that store had it when I'd called another store on Saturday. So, we circled back to the front of the store and began deciding on whether or not the newly discovered table and chairs would match with the Cedar Heights hutch. We called Maria over and inquired on pricing for the china hutch, table, and 8 side chairs. It was over $3,000 without tax and delivery! Way too much for our blood! We had her write down the info though so we could take it to Kaeleen's and get a better price.

We left and made it to Kaeleen's with about 15 minutes until they closed. We walked in and I called to Kaeleen that I was back and ready to buy! I could see something was wrong by the look on her face. Once she was closer, she told us she was unable to order anything for us. I asked why and she told us she had just signed the papers 3 hours earlier to close her store and sell all of her inventory to J&K Furniture. I was devastated! I FINALLY had found what I wanted and now I was going to have to pay a huge price to get it! I really wanted to give her the business. I know what it's like to be the little guy in business and her prices were so much better than Ashley's. I asked her if there were any other dealers in the valley that could order it for us and she said J&K could. We shook hands, wished her well, and headed out. Will call J&K tomorrow. Off to eat dinner...

Since we were close to West Gate, we decided to try this restaurant that was recommended to us. It's called Gordon Biersch Brewery Restaurant. I was a little concerned that it was a brewery restaurant but from the moment you walk in, you don't really realize that it is. It has a very modern, clean style and it doesn't smell like beer. In fact, we hardly saw anything related to that.

When we first walked in, there was an awesome smell. I asked about it and they said it was their garlic fries. Smell....mmmmm, good! The service was impecable. Our waiter, Tony, had a cool accent - it sounded french to me - and he was really good. I hate it when waiters hand you the menu and then are back 2 minutes later expecting you to know what you want, especially if you've never been there before. He started telling us about all the beers you could order and I politely interrupted him to let him know we don't drink and I didn't want him to have to continue if it wasn't necessary. He made some recommendations and then left us to peruse the menu. 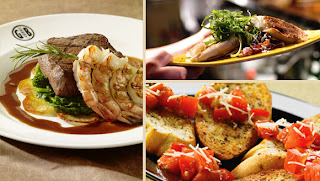 I swear, it probably took us 10-15 minutes to decide. Melon Man didn't think much sounded good and I thought there was a lot that sounded good! I saw Tony checking us out to see if we were ready or not and he just hung back in the shadows and let us be, which I loved. We finally agreed on what we were going to order and we laid our menus down. Very shortly thereafter, but not too quickly, Tony was there. He was so accommodating.

We ordered an appetizer called Tapas which I believe means something like little bites or such. It had an amazing flat bread, two roasted HEADS of garlic and a double scoop of bruschetta. Unfortunately, Melon Man doesn't like any of that other than the bread, but it sounded delish to me. Tony asked how it was and I recommended that the garlic be warmed, and a little olive oil and salt and pepper added, then mashed to be put on the bread. Off he went and came back with it warmed, some olive oil in hand, and more flat bread to boot! Mmmmm, good. Our salads came out a little bit later - again mmmmm, good, and then our meals - pretty good. Melon Man chose the ribeye with gorgonzola butter and garlic mashed potatoes. I chose the meatloaf with garlic mashed potatoes. The potatoes were good but needed some butter so I took Melon Man's gorgonzola butter since he didn't like it - mmmmm, good - and put it on my potatoes. Mmmmm, good. Asparagus - needed some S&P...once added...mmmmm, good. Dessert - key lime cheesecake for Melon Man, 1/2 a slice of double fudge chocolate cake for me...mmmmm, good. Best tip I EVER gave. Bill: hmmmm, not so good! But, good place overall...will definitely go back.

Headed home and apparently had major garlic breath all evening. As Melon Man kissed me goodnight, he said, "oooh, your breath wreaks!" I couldn't really tell....yet.