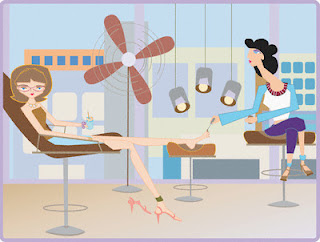 Oh my. Love them. It's been a long couple of months and I felt I deserved one. Plus, it's been a while since my toenails had been trimmed and they were LONG. I've gotten too fat to trim them nicely myself, so I have to have them done for me....darn....working on that issue. Anyway, stopped in to the nail place I like to go and there was no wait. Fantastic! I had an awesome pedicure and have cute hot pink toenails now with little diamond flowers on them! Then, I decided to treat myself to a manicure too! I just had them trim my nails a little so they were all even length, then do a french manicure with silver glitter lines between the flesh color and the white. Cute! Tina at work will think I'm stylin'!

Came home and C had made dinner - baked chicken and stuffing. Poor guy...didn't turn out as he had hoped and so he felt he'd lost his "touch" since leaving the culinary world a year ago and moved on to the produce world. Oh well...it's happens to all of us once in a while. It was just super nice though to come home and have dinner made and ready and not have to make it or go out somewhere. 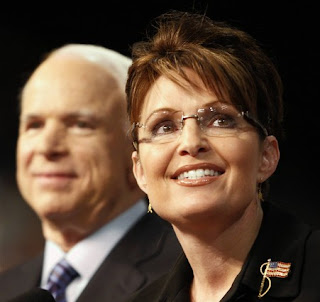 We watched the Republican National Convention tonight to see what Sarah Palin (the VP nominee) had to say. Looking at and listening to her made me realize that she will be a very good VP. She accomplished A LOT in the two years she has been Governor of Alaska. She appears that she can hold her own, but yet she has a side to her that not one VP before her as ever had - she is a mother and a wife and has done all she has while still maintaining her position at home. While the fact that her 17-year old daughter is unmarried and pregnant is weighing heavily on many people's ideas about her as a good mother or leader at this point, I applaude her for bringing it out in the open right at the beginning. Too often, people try to hide such things and it only causes heartache and rumors in the end. It is a natural fact that things like this happen. It happens to the best of families. It happened to mine. It's happened to others in our extended family. It just happens. People of the country - get over it and move on. Sarah Palin is refreshing and will be a breath of fresh air for our country.

Had my 2009 Plan review with my Senior VP today. Went well. He was happy with the changes we have been making in how we manage his budget. I was glad about that. Made all the other cruddy stuff this week worth it. Actually took a lunch today. Lunch? What's that? Felt good to be out of my office for a few minutes.

Glad tomorrow is Thursday. The weekend will soon be here and I can't wait! Super Saturday signups end this Sunday and then it's time to finish buying everything and start putting it together in kits for the big day. Need to go to Lowes and order the glass blocks. Need to order all the FHE board knobs, hearts, screws, and start cutting all the vinyl. Need to actually set up the big vinyl cutter! Need to schedule the glass block cutting/cleaning with my committee for next Saturday. Thankfully, Uncle Ward and his friend are going to cut all the holes for us. That's a lot of holes - 125 of them!

Going to Uncle Ward and Auntie Sigie's this Saturday for dinner to celebrate his birthday. Our 3rd anniversary is coming up next week. Can't believe it's already been 3 years. Where on earth has the time gone? Love you Big C.

Great post. Love to know what's going on. Clintamous- Sorry your dinner didn't turn out how you planned, but congrats on making the effort. Thanks for trying for my sissy. We love you guys so much!

Ari loves Pedicures. She asks for them all the time. I don't know if it is because it is a girl thing, or just that she feels so grown up when she get one.

Love those mani/pedis! Mostly pedis for me. Wow 3 years. That went by FAST!

Good for you. You deserve to pamper yourself. Glad you took the time to do something for yourself.