This Day is History 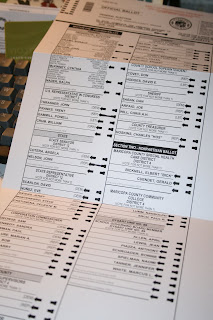 Well, I did it. I went and voted. The lines weren't too long at 5:45 in the morning and since all I had to do was go drop my ballot in the box, it didn't take long at all. Too bad it really isn't going to matter. Obama is going to win unfortunately. He is the candidate of the new century. He used technology to get his voice out there, whereas McCain stuck with the same ol' rigamarole of the past. Obama struck a cord with the young people and McCain didn't. That's why he's going to win. He promised big things to young people that have no idea that what he promised can't be done because of the way our country's laws are set up. Too bad we now will have a president that didn't even follow the law by being a natural-born citizen. As we watched the returns on TV tonight, our hearts just sank as we saw state after state go to Obama. I can't even call him President. That name just does not fit the President of the United States. I am fearful that our country is headed into further despair.

On the other hand, it IS nice to see that a black man can finally be elected to the highest office in the country. If it had been Colin Powell, Condoleeza Rice, or Samuel L Jackson for that matter, I would have voted for them. But not this liar, inexperienced, hider of truth.

Luckily, Prop 102 (Prop 8 in Calif) passed which defined marriage as between a MAN and a WOMAN. This is exactly how God intended it. Too bad our founding fathers didn't have the forethought to state it this way in the Constitution. I'm sure the Supreme Court will interfere again and will strike it down like they did previously in Calif. I'm more nervous this time though because people are blaming the church and saying the church bought the votes. The church did not give pay for all of the work that went into getting this passed...the people did.

I also had a friend from church who ran for public office for the first time and won. Congrats Bonnie!