Today was Stake Conference and it was a little different, to say the least. Because our Stake is so large, it was held in two sessions. There were no speakers present - they were there via video feed. The session was being broadcast to 88 different stakes in Arizona. There were two things that I gathered from the conference:

1) The sanctity of marriage and how important it is to us and the world.

I've really been struggling with the way the Church has gotten involved in the whole definition of marriage proposition issue this year, but I do realize just how important it is. I fear that after the election is over on Tuesday, that we (the Church) will again be the target of hatred and retribution. The Church has gotten involved this time not because of a particular candidate, but because this is a moral issue for which we need to stand up and support. 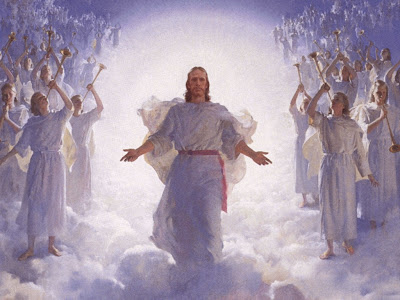 2) That we need to continue to prepare - that times are going to get a lot worse.

How many years have the members been told to get prepared, to have a food storage, to get out of debt? Many, many, many. I feel the time is close at hand when the Savior will again appear and that the times preceeding His coming will be very difficult. I truly need to take stock of what we have and what we don't. We are mostly out of debt and are working to pay off the only two debts we have - my truck and our house. The one we need to work even more is to be spiritually prepared. I've struggled with my scripture reading my entire life. Now is not the time to falter. How else will I really come to know my Savior so I know Him when He comes?

After Stake Conference was over, the members of a couple of wards were asked to return an hour later. We hung out and waited since it hurt my foot too badly to walk. It was nice to just sit in quietness in the chapel and visit softly with a couple of people. When the meeting started again, it was announced that our Bishop was being released and that our ward boundaries were being realigned. We were now going to be in a new ward - my former ward, Kingswood Park. We were thrilled! This would be a new start for us to build new relationships and hopefully feel more like a part of a ward, unlike what we have been feeling in our current ward. It wasn't that we disliked anyone in our ward, we just never made a connection there other than with a very small number of people. But....we are just so excited to go to our new ward next Sunday (even though it will be at 8 am!)

I am happy to hear about the change. I know that you and Clintamous have struggled with this ward for quite some time. I admire that you have still been faithful in attending your meetings and fulfilling your callings. Maybe this will be exactly the fresh start that you need.