9:00 AM: Just received a call from Kurt. The specialist believes that Ang has Pregnancy Fatty Liver Tissue disease. They are still working to confirm but are treating it as if that's what it is. She is on a steroid - he couldn't remember what it's called - to help alleviate the problem. They are taking blood every three hours to monitor her improvement. The baby finally got moved out of the NICU into the regular baby area. Her blood sugar levels are finally starting to improve. Ang finally got to hold her again at 5 AM this morning. It was only the 2nd time since she was born.

Please pray for both Ang and the baby. I forgot to mention that during delivery, Ang's blood pressure dropped to 57/20. At first, they thought the machine malfunctioned because it was so low, but they tried another and it continued to be that low. So, we easily could have lost her. They both are still not fully out of the woods, so please pray for them. Ang is still in the labor and delivery ward because they are so concerned with her case and want to keep a better eye on her than they would in the regular rooms.

Kurt sent this picture via his cell phone, so it's not the best, but will do for now....notice the cute little hat she's wearing....Papa Joe made it for her. 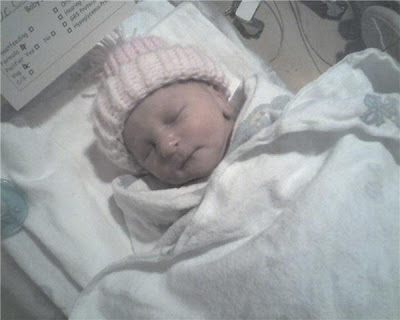 Precious! Do we have a name yet? Did Angie have a harder than normal pregnancy? When did all this start? My gosh! Did the doctor have any inckling of any of this? What a blessing we have them both!

Please keep updating as much as you can. I'll check in a couple times a day.