Give a Man a Checkbook and a Credit Card... 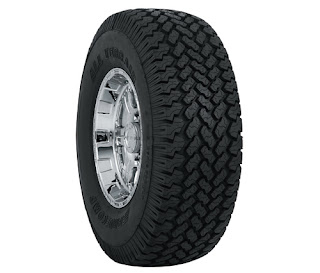 ...and what does he do? He sweetly spends his entire day off running errands for you! Yep, C went today and had new tires put on my truck. My left front tire had worn really, really bad because apparently my truck was really, really out of alignment. Plus, the last time I was in for an oil change, the tires were statused "replace soon" and the tread was pretty low. We have a little road trip planned for next month so we knew we had to have it done. I was really hoping we wouldn't have to replace all four, but all the heat here just doesn't do the tires well. Plus, my truck already has 43,000 miles on it so I guess it is about time.

So...oil change and alignment ($130) came first. Then, off to get new tires. A whopping $921 later (yep, 18" truck tires are costly!) and he heads off to the trailer storage place to pay the space rent on our little ol' tent trailer. We had to pay 4 months worth ($208) because the storage place owners are never there to accept a payment (even though we've tried) so it hadn't been paid in a while. I do have to say though, that 4 months is far better than the 12 months we thought we were going to have to pay. Apparently, C pre-paid 6 months worth a while back and we just forgot!

The day ended with a little dinner at The Coral and then some American Idol. There certainly are some big cry babies on there as well as some drama queens. Should be an interesting season!

I'm really am trying. You can sell it if you need to. Where is you road trip too?