It's Rainy All Over!

It's been a long day.  Melon Man drove me to the airport - I was glad too, because not only did I get to spend that time with him, but I didn't have to find a place to park in the rain or wait for the shuttle in the rain.  He dropped me off at the curb and I went inside to check my huge bag.  It weighed 39.5 pounds.  Oh no...I only have 10.5 pounds that I can add on my way back without having to pay extra.

I got through Security quickly (I'm so glad I have "status" now and can go through the "special people" line!) and headed to my gate.  I hung out and soon it was time to get on the full plane for Dallas.  Yes, this time I had a connection with my flight.  It's a long story as to why I had connections and a week long trip.  But, I don't need to really go into all that, so I won't.  I didn't mind having a connection in Dallas.  I'd never been there before and it was an opportunity to get up, stretch my legs, and let my butt relax a little from being squeezed into that tight seat.  When we arrived in Dallas, this is what I saw: 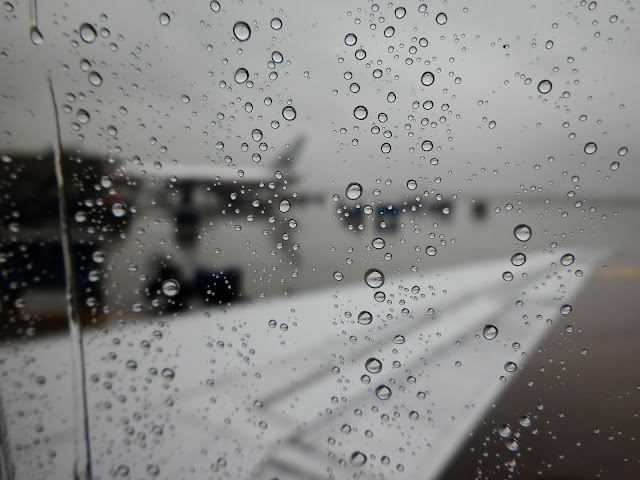 It was raining pretty good.  Just like in Phoenix when we left.  I hadn't really noticed because I slept from the moment we backed out of the gate in Phoenix until just as we were landing in Dallas.  Ahhhhhhh.  Sleep.

I got off the plane, used the toity, looked around, had some lunch at TGI Friday's, and then found my new gate.  No possibility of upgrading to First Class.  Darn.  Oh well.  Very quickly it was time to board for the Chicago leg of this flight.  So, on we went again.  Love Priority Access.  I get to get on right at the beginning and don't have to worry about my hips hitting anyone as I walk to my seat.  Yay.

As I got on the plane, I thought about something.  Here I was...deep in the heart of Texas...and I hadn't heard the drawl, I hadn't seen the big hair, the big hats or belt buckles, I hadn't seen anything "Texas".  What?  Was I stereotyping Texans?  I guess so!  I WAS kinda bummed though that I hadn't seen any real Texan cowboy hats and such.  But...I didn't have to wait too long.... 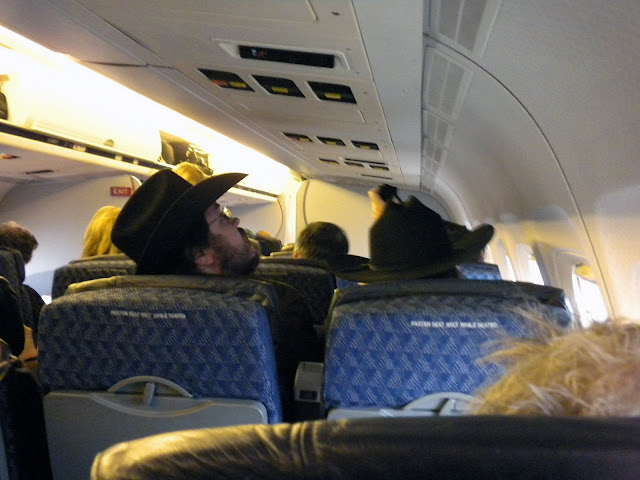 Yep, some "good ol' boys" were seated three rows ahead of me.  They had their big ol' black cowboy hats on.  These were the only cowboy hats I saw the entire 1.37 hours I was in Dallas.  And now they were in front of me.  But, not for long... 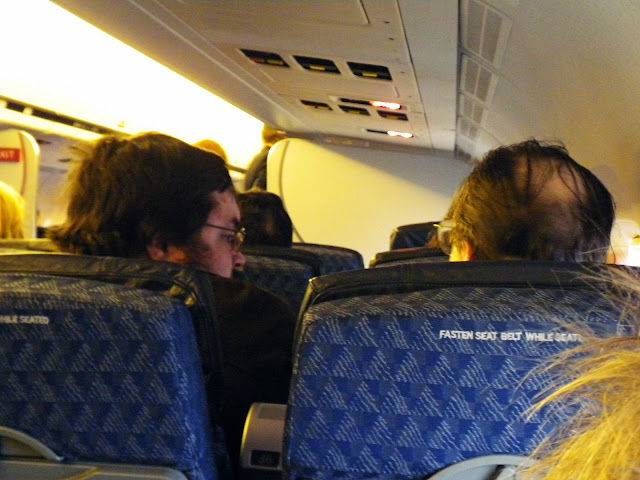 Pretty, huh?  I just love hat hair...not.  Oh well.  So, soon we were ready to take off and guess what...I don't remember that one either.  I was out again.  I didn't even get a soda on either leg of the flight.  And...it was really nice to get that rest.

There was one point during the flight that I did wake up and I looked out the window and wondered where we were.  I took this picture of the lake below, hoping to be able to find it on Google or something, but I never did find it.  Oh well.  It was pretty anyway. 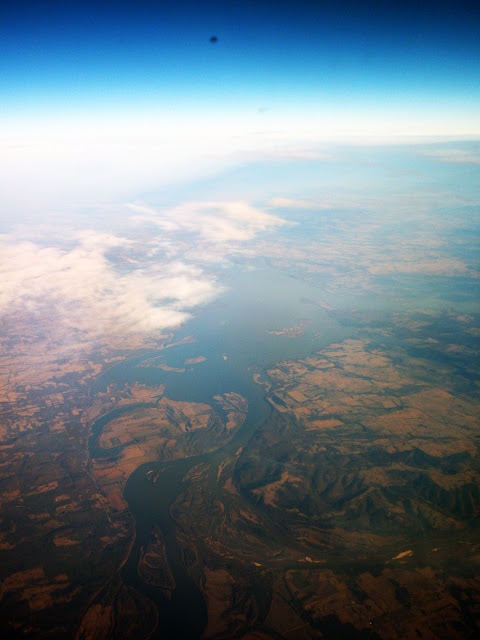 I also noticed these "forest" fires blazing from 32,000 feet above.  It made me wonder if anyone knew they were there and also what caused them.  However, there was nothing I could do though from that high in the sky. 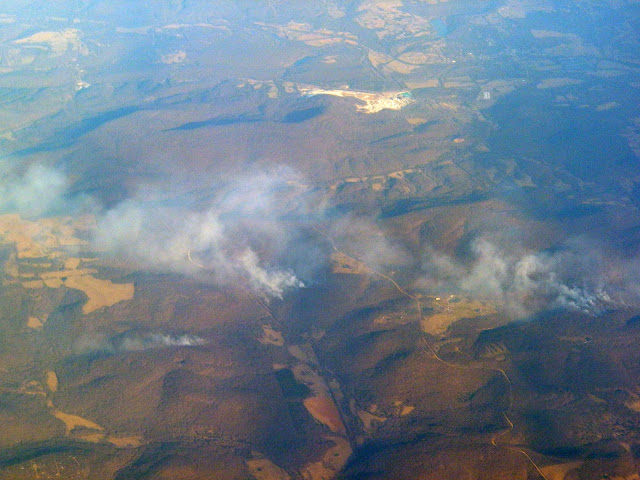 I quickly got my suitcase and rental car and headed to the Westin.  This was the first time I'd stayed at the Westin.  It was pretty nice, except that the parking situation there SUCKS.  The professionalism and hospitality there is so much better than at the other hotels in the area though that it kind of made up for it.  This is the lobby. 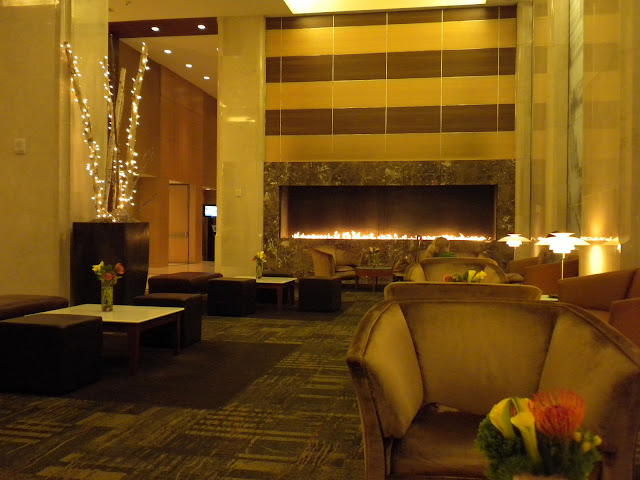 The fireplace was quite welcoming and warming, but I was already starting to sweat so I quickly took my bags to my room, used the tinkletorium, called Melon Man to let him know I had arrived, and headed out to find a place to eat.

The last time I was in Chicago, I'd found a Cheesecake Factory not too far away so that's where I went again tonight.  My waitress was kind of irritating but the food was good.  I'm really into salmon these days for some reason so that's what I had.  It was delicious. 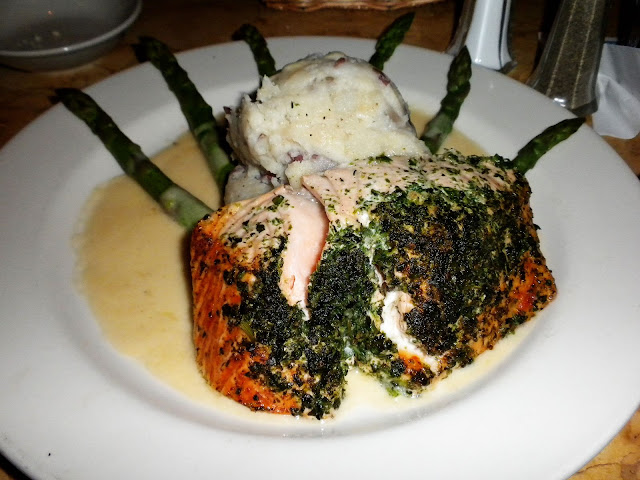 Very moist - in fact, the underside was just a little TOO moist and maybe wasn't fully done yet.  It was tasty though.  Unfortunately, no room for dessert tonight.  Bummer.  Who goes to Cheesecake Factory and doesn't get dessert?  Even to go?  Me.
I came back to the hotel, parked in the parking lot that was down the hill, through the woods, and across the street, and then hiked it back to the hotel entrance.  I went up to my room, stripped down to my skivies, turned the A/C on and down to 60 degrees, and watched some tv before heading to sleep.  Big day tomorrow...I hope I get offered the job!

I love salmon too. It's probably my favorite fish.