On My 3rd Day of Christmas Break... 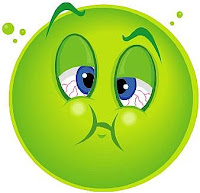 I ran out of the chapel right during the Sacrament to vomit.

Yes, you read that correctly.  Right during the middle of the Sacrament, I threw my Children's Songbook in Melon Man's lap, clapped my hand over my mouth, and got up and ran out of the nearest door (at the front of the chapel!) to find the nearest restroom.

I had made the unfortunate mistake of taking one of my meds on an empty stomach this morning while on my way out the door to church.  I was going to grab a few crackers or cookies to take along, but we were already running a few minutes behind so I didn't.  Big mistake.  As we were sitting there listening to the announcements and singing the first hymn - which I couldn't sing because I have practically no voice right now - I could feel the nausea coming on.  I cannot stand nausea at all.  It has got to be one of the worst feelings ever.  So uncontrollable and just so nasty.  I'm certain I was turning all different shades of green.  At first, I thought maybe it was just nerves...I was supposed to accompany the Primary children for their portion of the program today and I had been nervous all week that I would make mistake after mistake.  But, I'd practiced A LOT this week - even being sick and everything - so I wouldn't make any mistakes.  So, I was certain that this nausea was not due to nerves.

After heaving three times, I waited in the foyer with all the folks that were late and then once the Sacrament was over, I headed back into the chapel to find our bench empty.  Where was Melon Man?  I sat down and looked up on the stand.  What was he doing up there?  That's when I heard Bro. Saunders announce there was a change to the program and the children would now sing after the first speaker instead of before her.  He had gone up and told the Bishop that I was supposed to be playing for them and that I was out being sick instead.  In one way, I would have preferred to just play right then, but I was still shaky and queezy so it was probably better that I had to wait until after the speaker.

I ended up doing ok - just a couple little mistakes, but nothing horribly major - so I guess that felt good.  Now, I have to begin finding a piece of music to play in May as I promised Sis. Ritman that I would play something then.

After Sacrament, I went to play in Primary and still wasn't feeling well so I finally went and found Melon Man and we left.  I crashed on the sofa and slept until about 3-ish, I think.  I finally got up and finished working on Christmas stuff.  I had to cut some more vinyl for home & visiting teaching gifts.  I dealt with monthly bleeding issues too.  Today is Day 3 so it's really heavy today.  I'm already on my 3rd pair of underwear.  One more month of "evaluating this treatment plan" and then I go back to the doctor for a review.  I wrapped until 1:30 in the morning and then finally decided to call it quits for the night.  Packing will have to wait until the morning.