Melon Man picked me up from work this afternoon and we motored on down to Mesa to go to the Easter Pageant.  We were really excited to go this year because our cousin, Tere Rasheta, is in it as one of "the multitude."  Melon Man had grabbed some Riva's mexican food for us to eat while we waited and I could barely wait - I was so hungry!

We arrived at the temple grounds and my heart started to get skip a beat just knowing where we were and what we were about to witness.  I silently prayed that there wouldn't be protestors as there have been in years past...I just didn't want to have to see that after seeing such a beautiful production.  We found an excellent parking spot nearby and headed across to the temple grounds.  It was only 6 p.m. and there were already tons of people (note to self - don't go on opening night).  Unfortunately, we ended up sitting a little further back than I had wanted to, but we could still see fairly well.  As we waited, I ate my dinner and Melon Man wandered off to the restroom trailers, then over to the visitor's center, and then headed back to me where he later decided to finally eat his dinner. 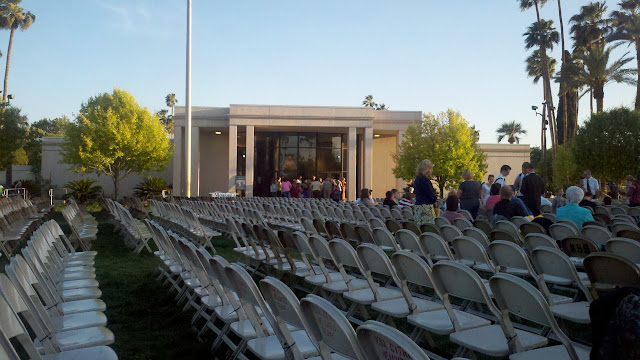 In this picture, Melon Man (in the red and blue striped shirt just to the right of the lady in the pink shirt) was part of the little crowd over in front of the visitor's center petting some lambs that were part of the production.  He has such an affinity for animals and I could see him petting them so I just had to capture that tenderness that he has.  Too bad I didn't have the fancy pants camera with me...I could have gotten in so much closer.  I guess this picture of him with the lamb just before the production started will have to suffice. 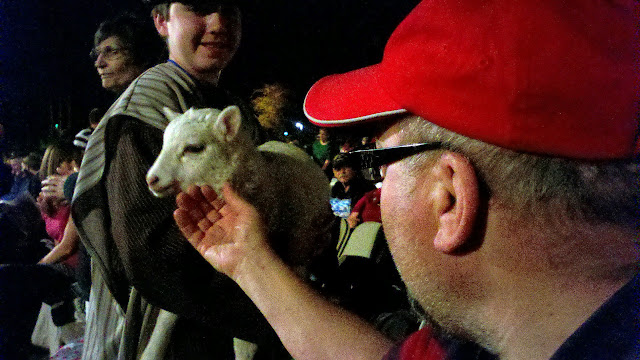 We tried taking pictures of us with my cell phone camera while we were waiting, but I just don't have the hang of it yet so I look horrible in each one of these, but it doesn't help that Melon Man kept making silly faces in each picture.  At first I was getting irritated that he kept doing that, but now as I write this and look at each of them, I just laugh.  He's such a free spirit.  He has a happy heart and doesn't let much get to him.  I am so grateful for that.  I wish I could be more like him in that respect.  However, I do wish he would trim up that goatee and moustache! 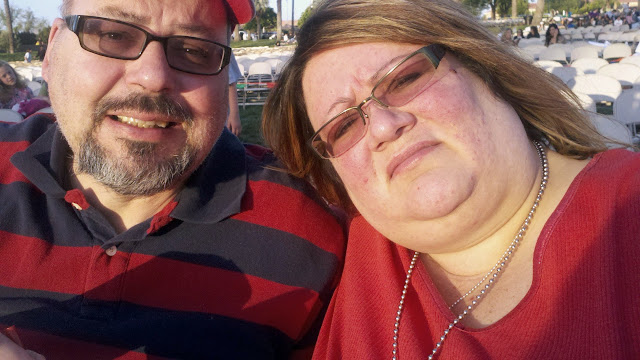 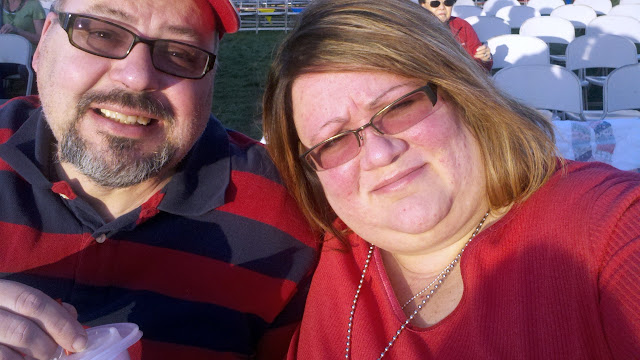 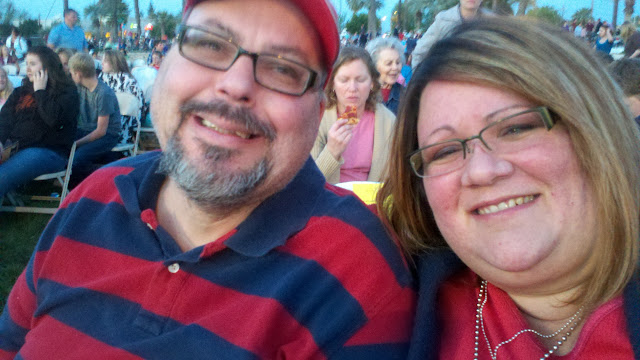 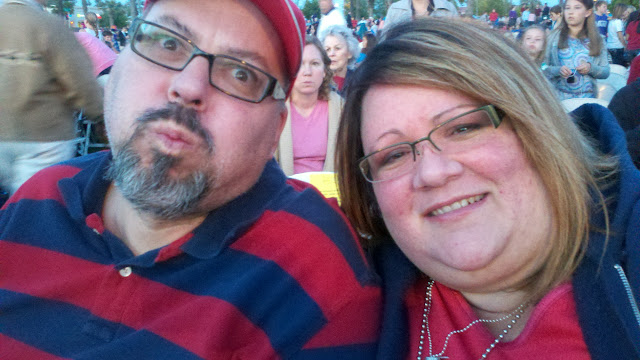 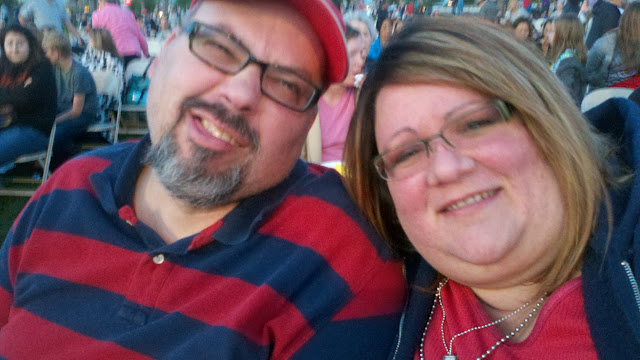 Just when I would finally get a halfway decent picture of me, he would blow our picture with one of these dorky faces.  Oh well!  Twenty years from now when I'm looking at this entry in a blog book, I'll have forgotten about the fact that he bugged me because he wouldn't just smile and the dorky faces will bring back the good memories instead.  Good times...
This is a picture of the stage where the performance is held.  They actually built a permanent foundation for it this year. 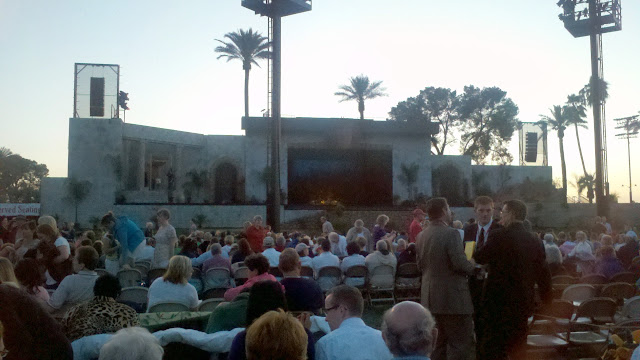 As it started getting closer and closer to the time for the performance to begin, we were getting sad that we hadn't seen Tere yet.  See, prior to the beginning of the performance, many of the characters walk amongst the crowd thanking them for coming, asking people where they are from, etc.  We talked to a number of the characters and nobody knew Tere by name.  It was about 7:30 or so when a lady was talking to us and we described when Tere was supposed to be on stage and that's when we found out she is part of "the multitude."
About 15 minutes later, I just happened to spot someone that looked like her walking across the path just up there in front of us and I slapped Melon Man on the arm and said, "There she is!  There she is!  I think anyway!  Go see!  Hurry!!"  So, he was up and out of his seat and sure enough, it was!  She was so excited to see us and we were so excited to see her.  We grabbed some quick pictures, visited for a couple minutes, and then the song to gather all of the characters to the back of the set, "I Need Thee Every Hour", started playing so she had to go. 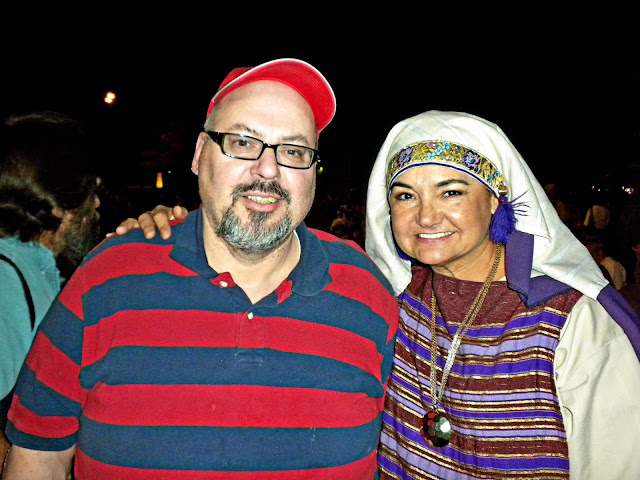 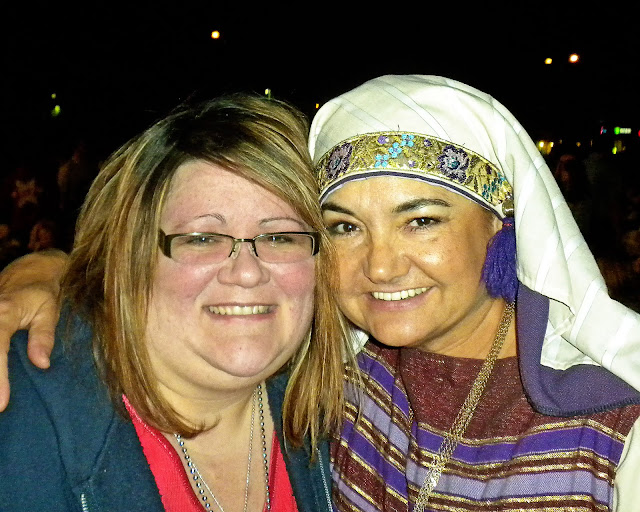 Soon it was time for the performance to start.  It wasn't long and I was immediately wishing I'd brought Miss Fancy Pants to take pictures with instead.  Especially when Tere was finally on stage.  Oh well, maybe she'll be in it again next year and I will definitely bring it then.  So, these are a couple of pictures from the performance.  Of course, my battery died RIGHT BEFORE the very end when Christ ascends into heaven!  So, I missed that part.  Dang!  Oh well. 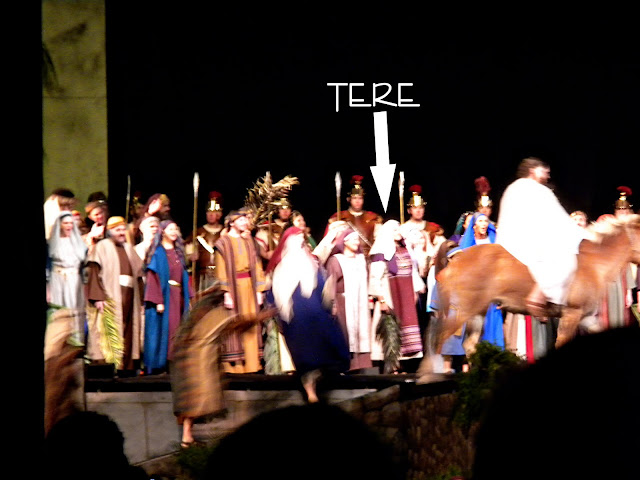 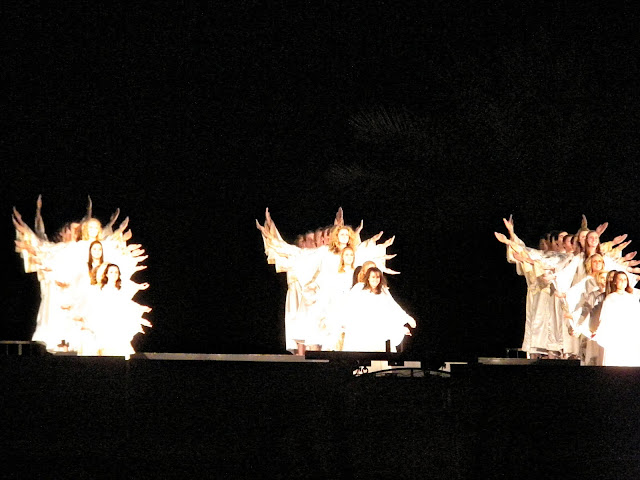 We had an easy way out of the traffic mess and we were on our way home.  I slept for part of it and it felt really good.  I'm really tired this week.  I think the extra mental effort I am expending at work right now is just sucking the energy out of me.  Hopefully, soon our team will have the project rockin' and we'll be able to normalize our schedules a bit and hopefully soon my brain will kick in and I'll feel better at what I am learning and won't have to work so hard to retain all of it!
This evening was a lovely end to a busy week so far.  Much needed uplift too.