We started the morning off with breakfast in the dining area downstairs.  Weird...it's a hotel with kitchens in your rooms - but they have a free breakfast every morning - and not just a continential one either!  I'll take it though...the less I have to cook, the better!

Today is Mom's birthday and Jen and Julie and I wanted to spend some one-on-one time together to celebrate.  Melon Man decided he wanted to stay and sleep some more, so we girls met at the hotel and then left to go to Real Deals in Layton.

The owner of the Layton store used to own a store here in Arizona, but then she decided to move to Utah and buy a store there.  Consequently, she closed her store here.  It's a bummer, because I loved going there!  Anyway, it was fun to see her again.  I told her I was looking for a bombay type chest similar to what I'd purchased from her before but she didn't have anything.  Everything she had was either too big or too small for what I needed.  I was wanting to actually buy two pieces that matched so we could use them for nightstands.  But, alas, I didn't find two that would work together.  Melon Man had told me he wanted a "trunk" like an old steamer truck, to use for his side.  But, I knew that I'd probably never find one for a decent price that was big enough.  As I was just about to give up on finding something at Amy's store, I walked through the clearance section and found a piece that almost fit the bill!  It sort of looked like a trunk sitting on a stand and instead of opening from the top, it opened from the side.  I can't believe I didn't take a picture of it!  Anyhow, Amy gave me more than 50% off on the price so I agreed to take it.  I was so excited because I was sure Melon Man would love it.  Now, I just need to find something for my side of the bed!

Jen and Jules jumped up into the bed of the truck and wrapped it all up in bubble wrap for me.  Then, we raced back to Julie's house to get it in her garage before it began to rain again (it rained a ton yesterday and today).  Then, we headed down to Gardner Village.  As we were pulling into the parking lot, we noticed this Subaru's license plate: 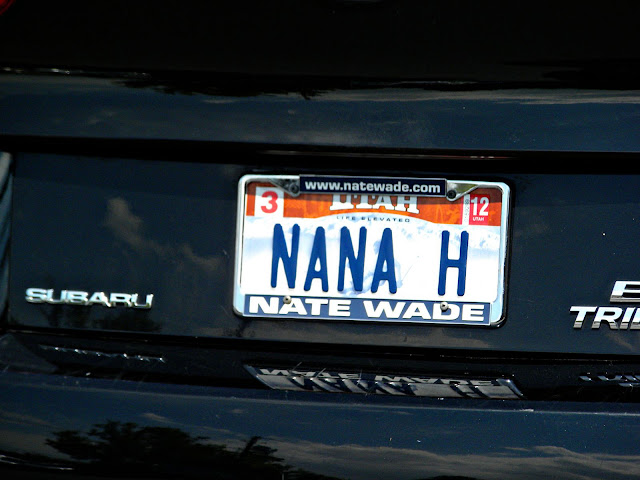 It was amazing - Mom had had a Subaru.  They purchased it from Nate Wade Subaru.  And she was called Nana (H) by her grandkids.  We totally felt like she was there with us.

There were a bunch of shops in GV that I wanted to go into that I had researched ahead of time, but now that I had C's chest, I just didn't feel like walking through all of them - plus I was suddenly really worn out and tired.  So, we just went to The Bead Farm.  A bunch of fundage later, we left. 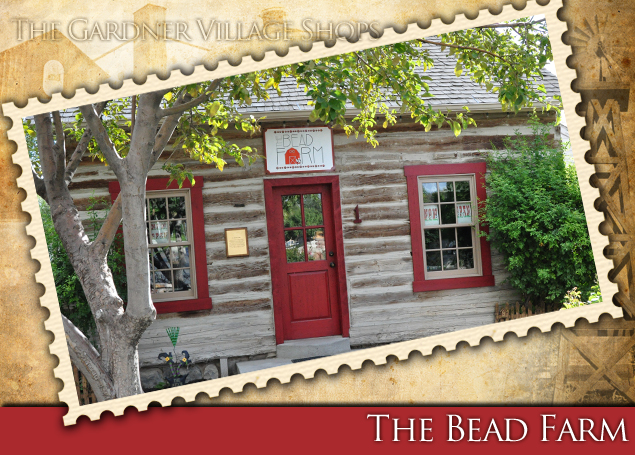 Jen helped me pick out a bunch of beads to make those cool big bead band interchangeable watches like the one that Jodi had made for me before.  I, of course, didn't have the patience to sit there and pick out JUST the beads for a watchband - I ended up just picking out a bunch that I liked and bought them - no rhyme or reason, just that I liked them.  Yeah...gotta stop that...that's how I end up spending too much money and then having a bunch of stuff left over that I don't use!

After we were done at the Bead Farm, we went to Archibald's for lunch.  We had fried green tomatoes and spinach/artichoke dip for an appetizer.  Then, I had a small salad and a bowl of soup.  Julie had the same and Jen had a regular salad.  We about lost it when our waitress came up to the table and her name was Brooke.  That was the name of the girl who died so our mom could have her liver.  Coincidental?  I don't think so.  Heavenly Father has ways of letting us know when she's able to be with us in times of need.  It was her birthday and she just wanted to have fun so she and Brooke came and visited with us as best as they could. 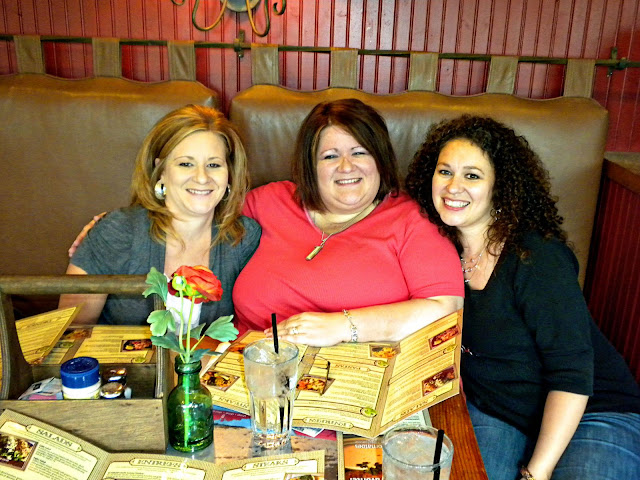 I love this picture of me with my sisters...except how prominent my ginormous boobs are in it.  It was a special day that I'll remember for a long time.
After lunch, Jen ran home to be with Taylor since he wasn't feeling well post-chemo.  Julie went home to her boys too and to wrap up a few preparations for tomorrow.  I came back to my sleepyhead man who was STILL asleep.  After about 45 minutes, he woke up and we decided to head to Kevin's to play games with them and some friends.  He shared an AWESOME salsa recipe with me - I'll have to try it next time I make salsa.  So easy and SO good!
We left around 11 and came back to the hotel.  Tomorrow is Tanner's big day.  I hope it all goes well!