Jen and I were lazy this morning.  We took our time getting up and then we just mozied along.  Melon Man wanted to take Taylor and Kolby to Lagoon for the day, but Taylor was insistent that it was too generous and he felt it would be a waste of money if he ended up not feeling well and they had to come home.  So, instead, they headed off to Trafalga to have some fun mini-golfing, bowling, go-cart racing, whatever they wanted to do.  All the other kids had spent the night at other cousins' houses so it was just Jen and me in the house since Shane was also gone to work.
She helped me get all of my card kits finished and put together for Mutual on Wednesday night.  I was so grateful!  It would have taken me forever if she hadn't.  I wish I'd taken pictures of all of them, but I am so lame lately at taking pictures of just the everyday stuff.  Drat.
Soon, the boys came home and it was just about time to head to Aubie's for the BBQ.  Before we left, the boys disappeared again (well, Taylor and Kolby anyway) and soon we discovered them coming down the walking path behind the house on scooters.  It brought tears to my eyes that Tato was feeling well enough to be doing this!

We soon all piled in the truck and headed off.  Neither Taylor or Kolby wanted me to take their pictures so they either looked away or just hid behind their sunglasses.  Teenagers....and...teenagers with cancer.  Enough pictures already.  Geez....

Jen was busy knitting washcloths as we rode along.  She always has to keep her hands busy.  Me, not so much.  We're different like that.  But, I'm grateful she's like that.  It usually means that once a year I get a basket full of new washcloths that rock.

On the way there, I caught this picture of the Oquirrh Mountain temple on the hill.  I would love to live near this temple and see it all lit up at night.  It's just simple and beautiful.  Actually, I'd just love to have any temple nearby...well, closer than 100 miles roundtrip anyway...

﻿When we arrived at Aubie's, Miss Peanut just had to show us that she could do the hula hoop now.  It was a hoot watching her!  I remember doing the hula hoop when I was young.  Oh...to be young again...and have a waist....

Soon, a number of other people had to get in on the action...like Scooter and Jack. 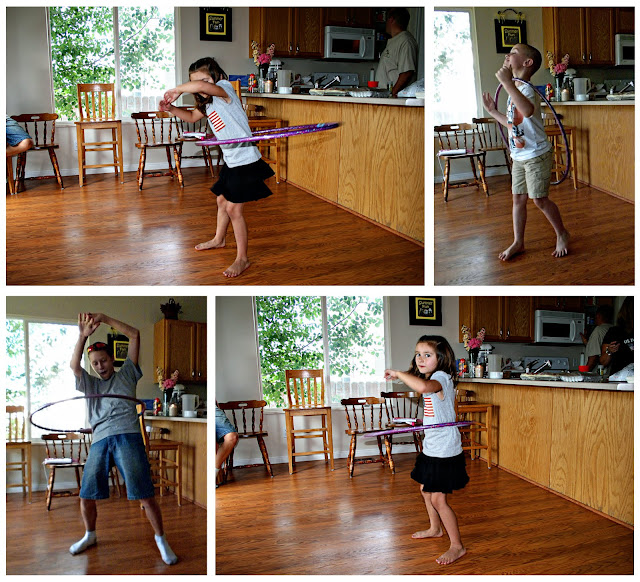 Jennifer even got in on the action...but that picture has MYSTERIOUSLY DISAPPEARED from my camera!  Drat.
The younger boy cousins had a blast jumping on the trampoline.  I was sure concerned about that sucker in Tanner's hand though!

How many men does it take to grill up a bunch of hot dogs, steaks, chicken, and such?  Apparently at least four when using a manly man's 65" grill.  Yeah, Kev has one.  Look at all of them, just standing there looking at it.  (Yum.  Meat.  Grunt, grunt.)

I love pictures like this.  All the little cousins sitting around on a picnic blanket eating.  They just love each other.  Doesn't matter what happens between the adults...they keep on loving each other and being so glad to see one another.

Peanut showed us her trampoline skills too...

Ah...and Aunt Jenn on the trampoline with Scooter... 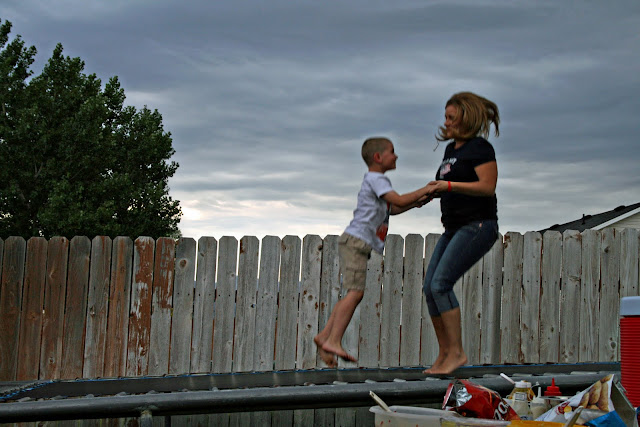 Since Colton's birthday was coming up the following Sunday and we had everyone there, including Shannon's parents, we had a birthday party for him.  There were a number of different desserts, so there was just this little birthday cake for him.  Yes...he is turning 22.  We didn't have enough of either kind of candle, so we created our own version of the number 22.

As everyone was waiting to sing Happy Birthday, I looked over and caught this picture of Peanut and Belle.  They were really into some conversation and when Peanut saw the camera (again), she pulled this quite odd face.  I love how Belle is holding up her foot/leg and don't you just love the multitude of nail polish colors on Peanut's toes?

Such cute pigtails...but again, no smile from my little Belle!

At one point, Kevin reached his foot over in front of Angie's face and she about died.  Ew...gross, Kev!

Once it was dark (yeah, like 10:30 at night in Utah!), we all went outside and the fireworks show began again.  The kids had fun with the sparklers, the parents had fun with the adult fireworks, and Ang watched from the backyard where apparently, the view of the aerials is better and less frightening!  Maybe I should have gone back there too...maybe I'd have some pictures of the aerials!

We soon left since we needed to get packed and ready to go home the next day.  What a fun time being with all the family.  Makes us think about moving there someday.