As I've been thinking about the new scrapboffice and the new layout, cubbies, and drawers, I realized I made a miscalculation on the countertops!  Drat.  Good thing they aren't cut to order!  Actually, it wasn't a bad mistake at all.  I just needed to go get another piece of countertop that was 6 feet long.  It would have been perfect if they'd had 9 or 10 foot long pieces since I need a piece 9 feet long, but they only come in 4, 6, or 8 feet so it will just have to be a 4 foot piece and a 6 foot piece cut down to 5 feet.  Oh well.  So, off to Ikea we went again today.  Also, since there needed to be really good support under that seam, we had to buy another 5 drawer set.  So, we got those things, loaded up and headed back home so Melon Man could sleep before going to work tonight.

On the way home though, we stopped at a new burger place in our little town...Five Guys Burgers and Fries.  HOLY MOLEY.  Expensive!  It was $28 for the two of us!  I got a cheeseburger, Melon Man got a Bacon Cheeseburger, a regular Cajun fries, a large regular fries, and two large drinks.  The burgers WERE really good.  Not so keen on the fries though - and there were SO MANY - way too many fries.  There were enough fries for like six people.  We wished they'd had onion rings.  Those would have been better.

The thing that really got my attention though was this soda machine... 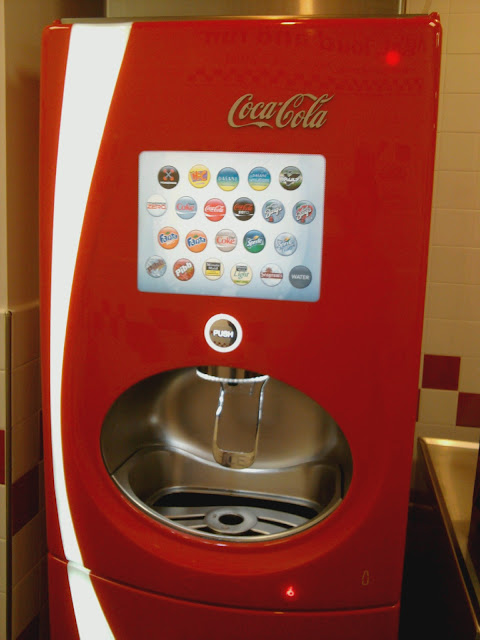 It was AWESOME!  It had something like 30 flavors in it and many in diet version.  It even had 6 or 7 diet Fanta flavors!  You just select one of the main buttons, then a new screen pops up and it shows you all the versions they have of that soda.  We loved that they have diet Root Beer.  The ONLY thing that would have made this machine better would have been if it would have ALSO had Pepsi products!

I could go there for just a drink...sit outside in the nice weather, read a book, drink multiple flavors of soda, call it good.  Oh...and maybe try a hotdog.  They have those too.

Isn't that funny? We think the opposite is true. We find the burgers just so-so but think the fries are the bom-diggity!