We left for Vegas this morning.  Dolly and I were up and out the door by 6:40.  We picked up some breakfast at Arby's and then picked up Uncle Melon Man at work at 7:10.  We dropped Dog off at the Petshotel and we were on our way!
Before we knew it, we arrived in Vegas at The Venetian Hotel.  We got checked into our gorgeous room and Dolly and I headed for the pools while Uncle Melon Man went to sleep.  He is up there...about 8-10 windows down from the top and 6 windows from the left.  Yep, right there. 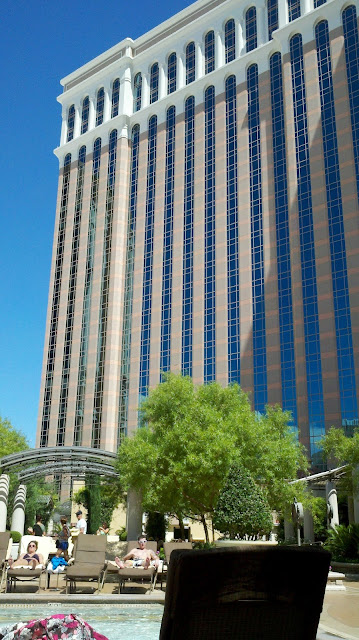 We tried calling him from the pool to see if he could see us, but he didn't answer.  So, we sent him this picture of a girl laying out in front of us.  We thought for sure he'd reply, but he had already fallen asleep. 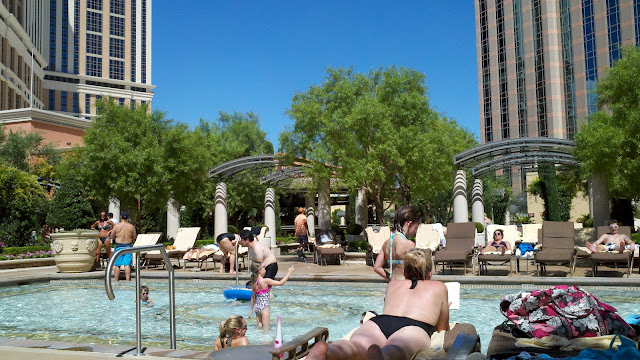 It was super hot that day and there were about a gazillion people at the pool.  Now, help me understand something.  There are like 7 pools at the Venetian/Palazzo hotels.  Yet, only 4 of them were open.  Two were "private" - you know, for the richy, rich guests - and there was one pool for the regular folk and a kiddie pool.  Plus, all the lounges in the shade were taken and that just was not going to be good for heat stroke prone auntie.  Guess which one we ended up at?  Yep, the kiddie pool that was only 18 inches deep and was hotter than a hot shower since it was so shallow.  We finally found a single lounge chair in the shade so we grabbed it and went and "cooled off" in the hot tub (aka kiddie pool).  We would sit in the water, get ourselves all wet, then GET OUT OF THE WATER to get COOL!  It was quite the experience, that's for sure!  Soon a family that had been under some trees was leaving so we hurried and grabbed two lounges they had been using so we could lounge together.
It was so hot that people were starting to get ill from being out in the heat.  We even saw the paramedics come to help some people out.  Could be that they were probably drinking alcohol and being out in the sun since we saw a lot of that.  Soon, the hotel staff started coming around with frozen washcloths for us.  I was glad to take one for each of us.  I put one over my face and it helped immensely.  Dolly eventually gave me hers too and I put it on my neck to help cool me down.  Yeah...see...my face is red from the heat.
Soon we went up to our room and got cleaned up so we could go to dinner.  We decided we really didn't want to go too far so we just went down to Grand Lux Cafe in the hotel.  I love this picture of Dolly and Uncle Melon Man...so cute!  (Wish I had noticed that dumb straw in it first though!) 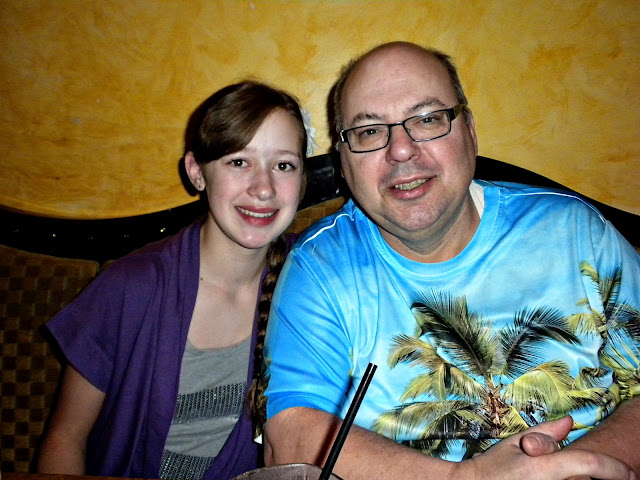 Uncle Melon Man ordered a Caesar salad with his dinner.  Look at his face when they brought it to him!  It was a whole freakin' head of romaine lettuce!  I'd never seen salad served that way before. 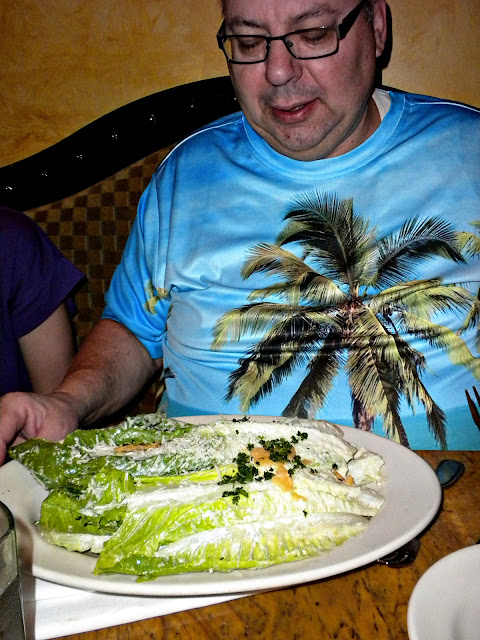 And look at Miss Dolly...being all good with her little salad instead of fries and probably one of the biggest BLT sandwiches (hold the mayo, please) I'd ever seen!  She didn't really eat much while she was visiting us, so I wondered how on earth she would/could eat that sandwich. 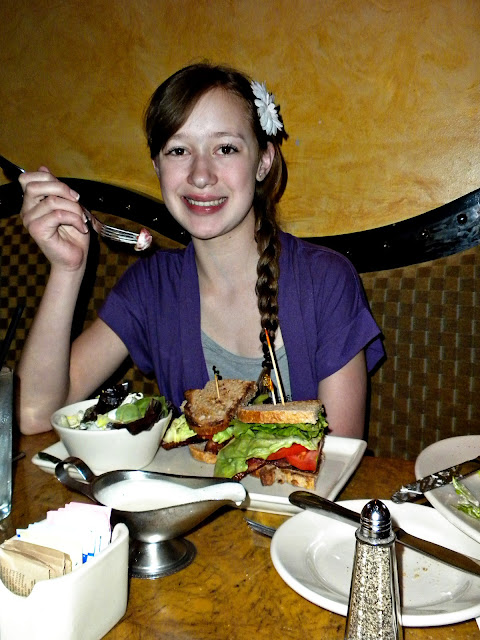 I ordered the salmon trio with garlic mashed potatoes.  It had soy glazed salmon with shiitake mushrooms, horseradish crusted salmon with asparagus, and almond ginger salmon with beurre blance and haricot verts.  Amazingly, the one I thought I'd like the least, the soy glazed, was actually far better than the other two. 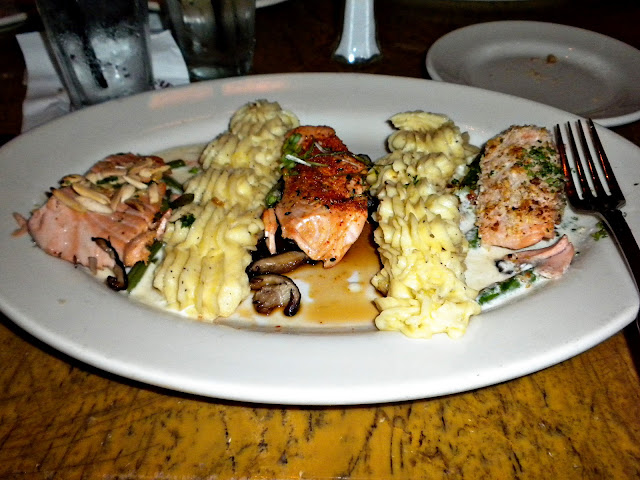 I ate the three pieces of salmon (they were really small - see their size compared to the fork?) and about 1/3 of the potatoes.  Then I gave the rest of the potatoes to Melon Man since this is what he got for dinner...a bunch of green beans and a small piece of steak.  When his plate came out, he looked at it like, "This is what I get for $30?" 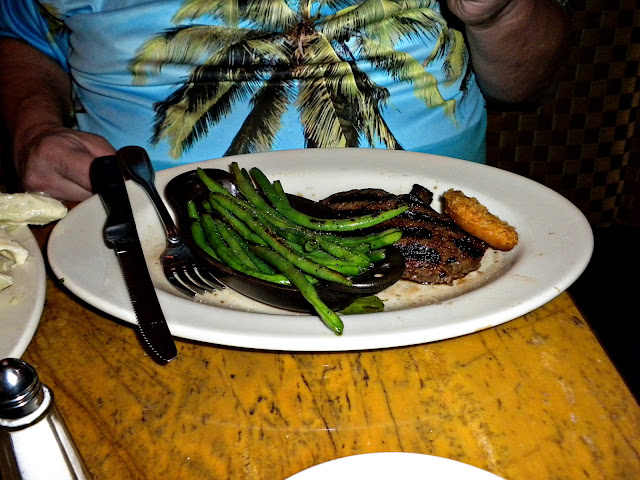 Dolly at 1/2 of her sandwich and most of her salad.  She said she was full.  I was good with that.  At least she'd eaten so I was happy.  But, when the waitress came out and asked if we'd like dessert, she was all up for that!  She decided to order the strawberry shortcake...um, yeah...this is enough for all three of us! 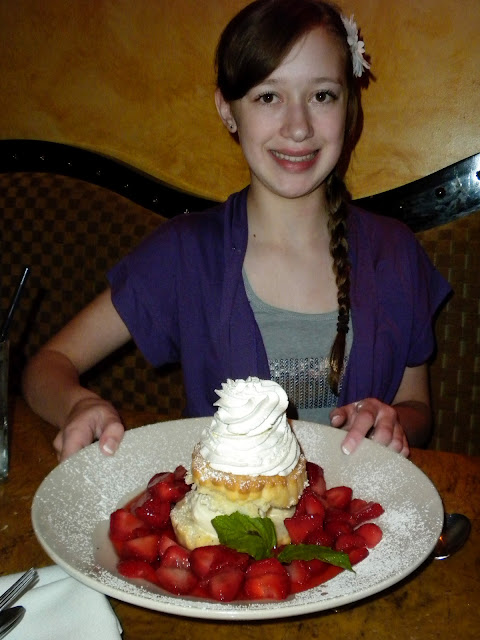 Uncle Melon Man got a slice of key lime pie.  It was gone before I could get a picture of it.  But...I had to take some pics of Dolly and her dessert to send to her mom...BEFORE and AFTER. 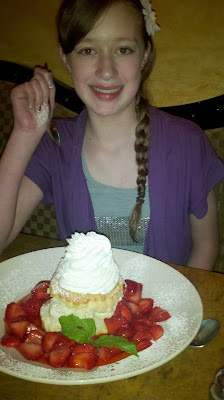 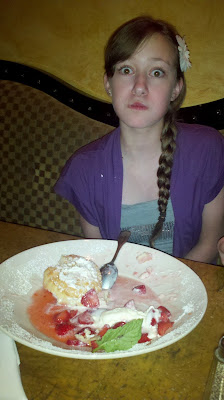 She ate almost that whole thing by herself!  I did help with the whipped cream a little and maybe like 5 pieces of strawberry, but she ate all the ice cream and all the rest of the strawberries and whipped cream.  Where did it go?  I thought she was full.  I learned by this time that this girl has a love of all things sweet.  She'll make room for it.

After dinner, she and Uncle Melon Man went cruising around the shops while I went to pick up the tickets for the show we were going to see.  We all met up back at the room and hung out for about 90 minutes watching TV while we waited to head back down to the theater.

And then it was time.

We headed down and got in line to see.... 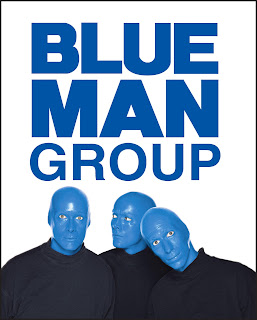 I had heard about these guys and had always wanted to see them.  Dolly was excited too.  Melon Man, well, he was fine with it.  Our seats were on the 2nd row in the center!  In the poncho section!  Yes...we had to wear ponchos.  I will just say that ginormo woman wearing a giant plastic bag in Vegas makes for a very hot sweaty person after 2 hours.  I was soaked with perspiration!  Melon Man, on the other hand, was freezing for a while. 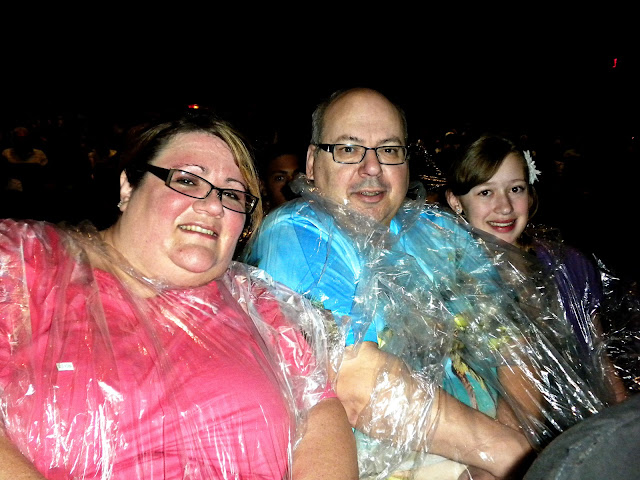 The showing was quite entertaining, but kinda weird too.  It's these 3 guys all in black that have wet-looking, glossy blue heads and hands.  They play these musical instruments they've made out of tubing and pipes.  They do weird stuff with paint and white creamy sticky goo and toilet paper.  But it was a lot of fun anyway.  I don't know that I need to go see them again, but it was a fun night with Dolly.
As we were walking out of the theater, all of a sudden Dolly says, "I'm hungry."  That shocked me!  So, after a quick potty break, we headed to the 24 hour pizza place in the hotel.  (It was after midnight!) Yep...that's her piece of pizza! 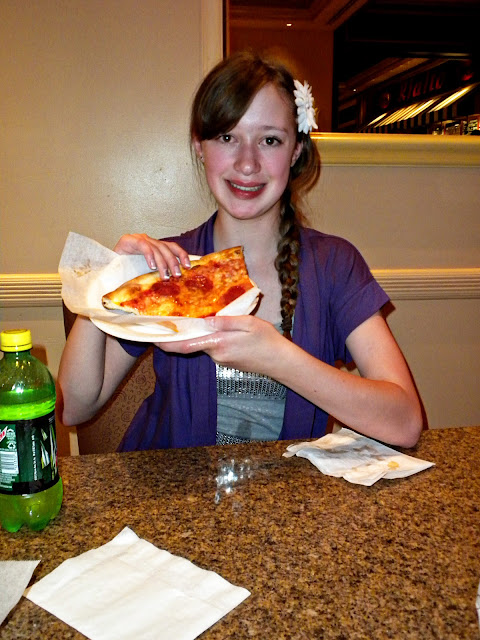 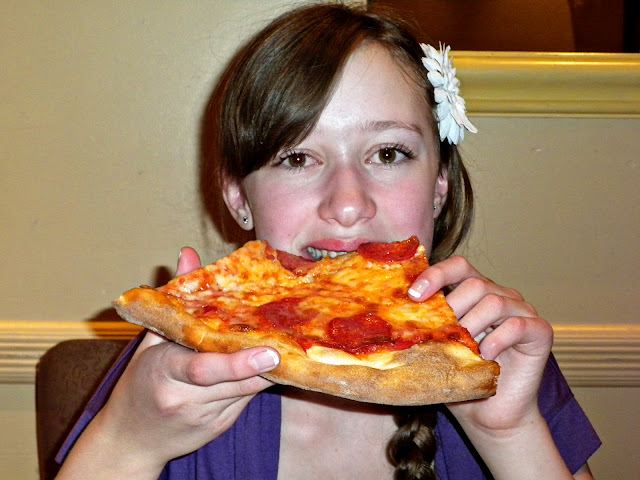 She ate almost the whole thing and then Uncle Melon Man finished it off for her.  It was now 1 a.m. and so we headed up to the room.  We went to pull out the sofa bed that I had confirmed once on the phone and again upon check-in, that was included in our room.  However, there was no sofa bed in the sofa!  I called the front desk and they were going to "see if they could re-accommodate" us.  I told them it was after 1 a.m. and I was not going to pack everything up and relocate my family in the middle of the night.  I told them to just bring some sheets, pillows, and a blanket up and we'd make our own bed for her.  It took them over 30 minutes.  I was getting pretty p-o'ed by now.  They finally arrived and we made her a bed.  She was out in a flash.  We quickly went to sleep too.  Morning would be here too soon, but what a fun day we'd had!  Oh...and after trying to stay in the shade...guess who ended up with a slight sunburn...yep, me.