On Saturday, we got up around 7 or 730, puttered around inside for a little bit, and then went out to work on the garage.  Melon Man had worked on it some on Friday since he was off that day, but there was still a lot to do.  Too bad we didn't take any pictures!  It was awful.  I hated opening our garage door and letting the neighbors see inside.  I'm sure the big black water barrels are kind of scary to them, but the bigger scare is just the overall mess.  So, we worked and worked on it.  Melon Man pulled the boat out into the street and then he worked on that side of the garage while I worked on all of the cabinets and junk on the other side.

After a while, Auntie Sigie and Uncle Ward came over to use the band saw to cut out some things for a Relief Society project.  However, our saw wasn't big enough for their project.  So, we just sat and visited for a while.  I shared some of the Green Onion Green Chile Rice I recently made with them so they could see how good it is.  After they left, we worked some more and finally finished around 3:45 p.m.  Yeah, I know, it took us about 7 hours, but we just worked on it bit by bit.  We'd work, sit, visit, work, sit, visit, work.  It looks a gazillion times better now.  There are a few things still needing to be done, but if we can get rid of this boat, it will make it a lot easier. 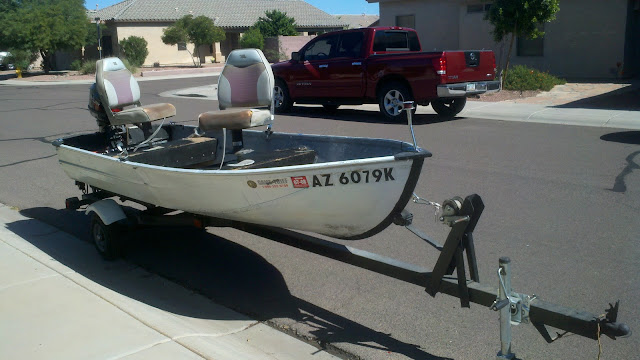 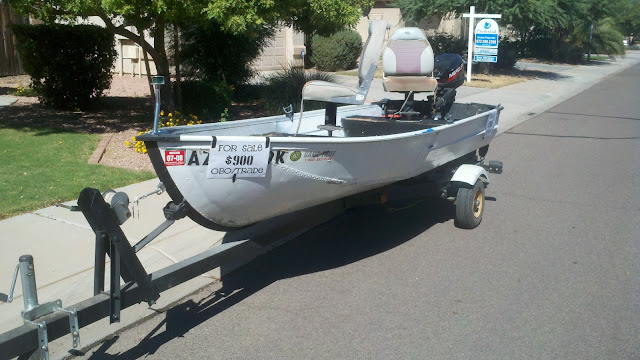 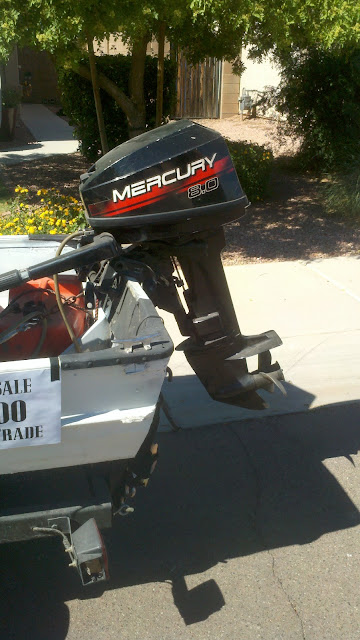 Know of anyone who wants to buy a cute little 12' aluminum fishing boat?  It comes with the trailer and a Mercury 8HP motor.  We've previously been asking $900 or best offer....but seriously, we'll consider just about any offer.  We really want to open up that space in our garage!

After we were done with the garage, we went in, got showered and cleaned up, and headed to Firebirds for dinner.  When we went there last month, we got a game piece that we could have opened by a manager on a return visit.  It needed to be returned by this month, so we took it with us and it ended up being for $25 off our meal!  So, Melon Man had prime rib for dinner and I had a BLT-B salad, along with some Southwest Au Gratin potatoes.  Our whole meal, after the discount, cost $16!!  THAT is awesome for Firebirds!

We then went to Beauty Brands so I could get me some Moroccan Oil for my hair.  I wanted to wait until I could have Jennifer get it for me at license price, but I won't get to see her until January, so I decided to just pay full price for it now....ouchy...$41. 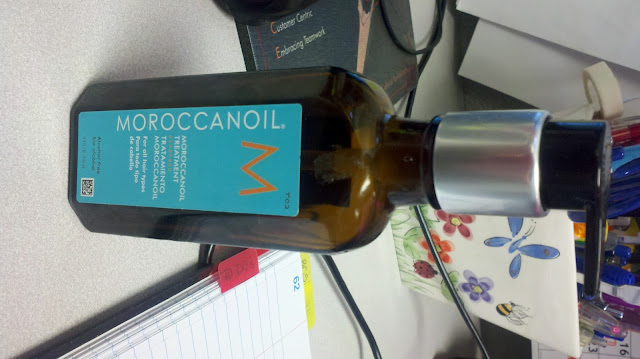 However, after I got into the store, I saw a much smaller bottle for only $15, so I got that.  It will last me until January (I hope!).  I LOVE this stuff.  It makes my hair smell SO good and makes it so soft.

We left that store and drove over to Baskin Robbins.  Melon Man ran in and got us some ice cream to take home.  While he was in there, I was putting the Moroccan Oil on my hair in the car!  It was an instance difference!

We headed home and spent the evening watching tv together.  It was a great first day of vacation!

On Sunday, we went to Robert and Natalie's ward because they were blessing Hannah.  It was nice to see Cindy, Duff, and Christine, Auntie and Uncle, Lisa and Craig, and Linda and Dave too.  The baby is beautiful and she slept in my arms for quite a while while we all visited.  Melon Man had a fun time playing with John.  When we got home, we were both exhausted so he went and laid down and I watched some tv.  Then, a while later he got up and I laid with my head on his lap for a while while we watched tv together, but I was so tired, that I soon found myself snoring.  I finally just got up and went to bed.  I think it was about 930 p.m.  I have no idea what time he came to bed.

This morning, we slept until about 8 a.m.  Then, we got up, puttered around the house for a bit, and then left around 10 to go to breakfast at The Coral.  I had a yummy egg white, mushroom, and cheese omelet, along with some other stuff.  I've really begun to enjoy those egg white omelets.  Sure, they don't have the robust flavor of a full egg omelet, but hey, it's protein that is okay for me to have and so I just make it taste good to me.

After breakfast, we went to Lowes.  Yeah, we didn't plan on going there until tomorrow, but, as we were leaving this morning, the garage door opener decided it was possessed (it IS close to Halloween, you know...) and it decided it didn't want to work anymore.  After much tribulation, scathing comments of retort, and a few "craps" and "dang its", we hit the release and it slammed to the ground.  It wouldn't go up or down again.  We have been having a lot of problems with it the last 2 years, so we didn't it was just time for a new one.  Well, the guy at Lowes asks us how old it is, and when we tell him it's 11-1/2 years old, he tells us 10 years is the magic number where they usually start breaking down so we're about a year and a half over that.  So...$337 later, we have a new garage door opener that will get installed tomorrow.

While we were there, we also bought a can of ORB spray paint, some tubes of liquid nails, and a gallon of Kilz primer.  Yes...there are a couple of home projects on the docket for this vacation week.  That's right...it is not a "fun" vacation week - although Melon Man wishes we were in San Diego or somewhere fun - it is a "working around the house" vacation...with a little fun and relaxation thrown in as rewards for accomplishing tasks.

I am going to spray all of the door knobs and hinges in our house with Oil Rubbed Bronze (ORB) spray paint - class 'em up a little from the ugly gold they are!  I'm going to try to do that toward the end of the week.  I am thinking of doing that with all of the towel bars too!  I saw on Pinterest where someone did it to their shower doors too and it looked awesome, but one thing at a time...

The main project this week though is to clean up the old office room, go through all the crap in there, get rid of a lot of it, wipe down the walls, take down the cheap-o chair rail, paint primer over the red portion of the lower part of the walls, install board and batten, and then paint the board and batten a nice white.  Then, we will move the black cabinet we bought from our bishop and his wife into the room, then go buy a headboard and mattress, and then finish it off into a beautiful guest room.  I can't wait for it to be done!  Maybe somebody will come visit us once in a while now.

After we finished at Lowes, we went to WinCo so Melon Man could check it out, along with so I could buy a bunch of vegetables for me.  I really do love their produce prices and the quality, much more than those at the Big Blue Box.  We got a ton of stuff.  I still need a few things they didn't have there, but we can get those at the other store.

Now, he has made himself some BBQ'd ribs for dinner and I'm going to go make me some veggies and then we'll spend the evening together.  I think I am going to make this for dinner: 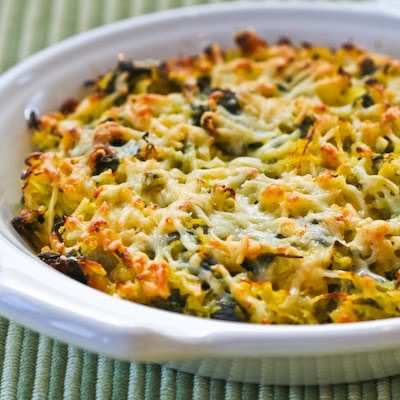 It is Spaghetti Squash and Chard gratin.  I have pinned the recipe from Kalyn's Kitchen onto my Goodbye Gout board on Pinterest, if you're interested.  I'm sure, if it's good, I'll post the recipe here (with full credit to Kalyn, of course).  I figured I'd better try it out first before I make it to take for Thanksgiving!

I want to get the room measured and figured out for the board and batten so we can go get that tomorrow too, but I think we'll just focus on that tomorrow.  Tonight, I just want to be with my honey.

Oh...and here is a recent picture of the new Phoenix temple that is being built for us:  Still, not a lot that's visibly changed in about a month or so, but hopefully soon we will begin to see walls going up! 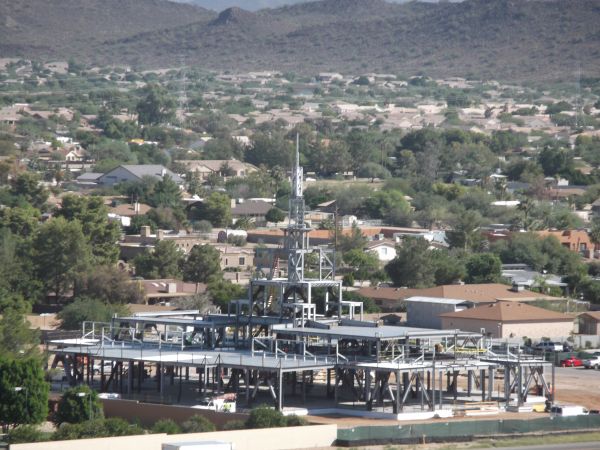