This morning, the phone began ringing a little after 5 a.m.  At first, I thought Melon Man was calling me to wake me up and it was a weekday.  But I quickly realized that it was actually Saturday and he knows not to call me in the morning on his last break if it's a Saturday, so then, I instantly knew, and could feel, that something was wrong.  I'd had this same exact feeling twice before in my life.

On the other end of the phone was a text-to-land line message from Melon Man's sister, Kris, asking me to call her.  I then knew exactly what the call was going to be - that his mom had passed away.  It was dark in my room and the light wouldn't turn on.  I couldn't dial the number and soon she was calling me again.  We spoke and things were a bit of a jumble not knowing for sure if she had passed or not, but I gave her my love and told her I would call her brother at work to let him know.  I called to tell him but he had already found out.  I began looking at plane tickets for us to go for the funeral while I waited for him to come home.  They were over $900 each but I didn't care - we needed to be there.

He came home and we talked off and on with family.  His mom apparently had not fully passed away, but had wanted to do so at home so his dad was planning a way to get her home where she could die where she felt at peace.  However, the folks at the hospital wanted to make sure she'd even survive the trip home so they removed the ventilator and she then passed away 10 minutes later.

I wanted to go to pay our last respects to his mother, but things didn't work out exactly as we had hoped.  Long story short, we will not be going for the memorial service.  We'll try going in the Spring when the ground thaws and they decide to hold a burial service for her ashes. 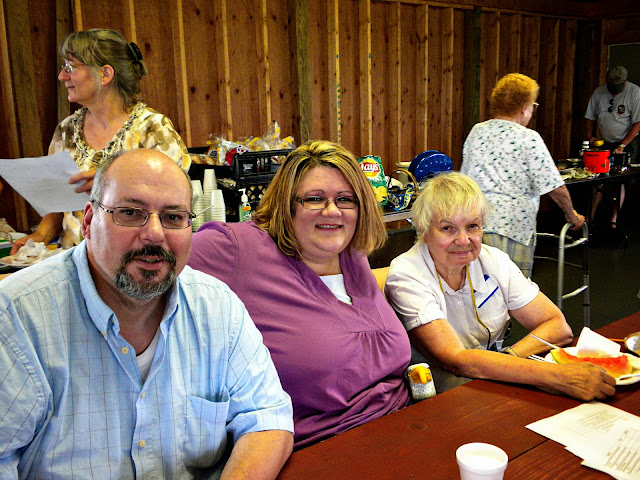 Born June 4, 1933 to Gus and Marion (Walters) Johnson in Perrysburg, Ohio, she was raised in Toledo. On December 23, 1955, she married Truman Vinson in Toledo. They were residents of Wayne County, MI, until moving to Northeastern Michigan in 1966, and to Harrisville in 1999. Nancy was a devoted homemaker, and later worked in accounting at the Veteran’s Hospital in Allen Park. She also volunteered at the Veteran’s Administration Clinic in Oscoda. Nancy was a member of the VFW Alcona Post #6466 Ladies Auxiliary. She enjoyed crafts, especially needlework, winning several prizes for her work.

There will be memorial service Saturday, January 26, 2013 at 1:00 pm at the Alcona VFW hall in Harrisville. Visitation will begin at 11:00 am. Memorial donations suggested to the Epilepsy Foundation. Cremation arrangements were made through Gillies Funeral Home, Lincoln.