Taylor Got His Mission Call!

Our family has been waiting for this day F.O.R.E.V.E.R!  Taylor is the first one of my mom and dad's grandchildren to go on a mission.  We are all so excited!  He received his call in the mail yesterday, but because it was his high school graduation, he decided to wait until today to open it.  We weren't able to be there because we live in Arizona and they live in Utah, but we were able to join in via Skype and FaceTime.  I took this picture of the Skype video with my phone to capture the moment.  Didn't even think about trying to record the whole thing!  Drat.  Oh well. 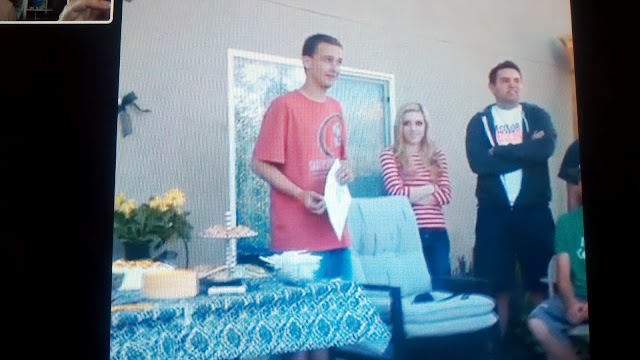 Taylor was called to serve in the California San Diego Mission, spanish speaking.  He will report to the MTC in Mexico City on July 24, 2013.  He will be there for 6 or 8 weeks (I can't remember), then will head back to the U.S. to serve his mission.  I am happy that he will be close, in case something happens with his health again, but I have faith that the Lord will allow him to serve without issue.

We will head up to Utah when he goes to the temple for the first time and then we'll be back up again for his farewell.  I'm just so excited for him!

I had to come back and look at this post so I knew when we could start looking for this handsome Elder :)