After church today, I went to Lisa's for dinner. She made a very yummy pork chop dinner in her crockpot. She's really trying to get me to use my crockpot more so I can have dinner made by the time I get home so C and I won't have to go out so often. I have the desire, just not the knack. It's also hard for me because I never know when I'm going to leave work and I don't want it cooking SO long that it ends up burning or something. I'm afraid to leave appliances running when I'm not home...even the A/C sometimes! But, maybe sometime soon I will try the whole crockpot thing. Anyhow...Lisa - Clint liked the dinner you sent home for him and was very grateful that there was dinner waiting for him when he got home. Cindy, Josh, Meredith, Auntie Sigie, Uncle Ward, and of course, Craig, were all there. It was nice to visit with Cindy and reminisce with her as well as have the fun that we did regarding some funny things that came up during dinner.

A funny thing happened at church today...they were reading the names of some new members and as they read one, a little boy's voice belted out "She's not here today!" I mean, belted! Everyone in the chapel laughed and turned to see who it was. The mother was mortified and the grandparents hung their heads and hid them with their hands. It was totally hilarious! It was the best part of church today (unfortunately).

Well, I FINALLY finished installing the shower door! It wasn't the easiest thing, but it wasn't all that hard either. That bathroom just needs a supersonic A/C vent in it though for when you're doing things like that. I already smelled bad from not having showered that day, but by the end of installing the door, I was ready to throw up. Headed for the other shower after that! Now, I just need to sew the swag and valance, install the chair rail moulding, and do the mirror frame and that room will be finished. Yay!!! 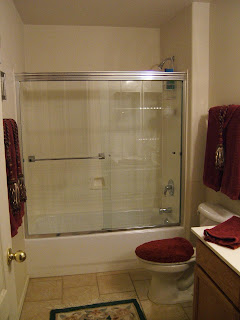 Love the Bathroom shower! Yea. It looks great! I am so glad Clint liked dinner. I think you should get an timer crock pot! I think you would feel more comfortable with that. Love you! Lisa

Yes, we had a lot of fun! I just couldn't help the 'laughing'. There are just some things you can always count on!