I didn't even remember that today was Father's Day until Friday afternoon when Auntie Sigie called and asked me to bring a dessert for today! I've just been busy and it all slipped right by me. I was sad that Dad and I only got to talk for a few minutes this morning and that there is something of a strain between us right now. I'm not sure why he seems to not want to talk to me, but I am struggling with some feelings I am having because of him as well. I'm sure we'll get it out in the open soon, but right now, it was hard not having the feelings I should have had for him today. I really do love him though and hope he had a nice day.

Went to Auntie Sigie and Uncle Ward's today after church for Father's Day dinner. Had a yummy dinner of BBQ'd pork ribs, baked potatoes, coleslaw, and fruit. I made a chocolate, banana, and brownie trifle. Yum. Gave Uncle Ward the movie, The Bucket List, for a gift. Heard it was really good so I hope he and Auntie enjoy it. 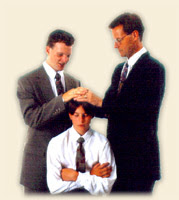 After dinner, Lisa asked her dad and Clint to give her a blessing before she started her new job. After they were done with her, they gave one to Auntie, then Meredith asked for one, then Janae (cousin Natalie's soon-to-be sister-in-law), then me. I really hoped Clint would ask for one too to help him in the feelings he is having about our ward and the lack of connection he feels, but he didn't. Maybe another time.

As Clint and Uncle Ward put their hands upon my head, I silently begged my Heavenly Father that He would hear my plea for healing regarding my body and the problems I've been experiencing with it lately. See, the night that C and I took the missionaries out to dinner a couple of weeks ago, I asked Elder Clark to assist Clint in giving me a blessing of healing. I was quite a bit frustrated after the blessing because I felt like C struggled to feel the Spirit's power during the blessing because of his feelings about the ward, etc. because the blessing was so short and the things he said didn't pertain to what I was desiring.

I've thought a lot about that blessing since that night. I just wasn't happy about it. It left me feeling so....I don't know....blah-seh....about what the Lord was trying to convey to me. I had talked to C about it later that night or the next day and how I was feeling and I sort of blamed him for not being in tune to the Spirit as he should have been to help relieve my suffering through the power of the Priesthood. He calmly told me that what he said in the blessing was what the Lord wanted me to hear and that's all that came to him. I still didn't really believe him.

Fast forward to tonight. I asked Uncle Ward to give me the blessing this time. Not because I didn't want Clint to because of what happened before, but because it was Father's Day and Uncle Ward was doing the "fatherly" thing of sharing his priesthood with all of us and since my own father wasn't there, I thought I'd ask him to give my blessing. Well, the Lord really did hear the things of my heart for He didn't share anything about healing or such, but, instead, said some of the exact same things Clint had said in my first blessing. The Lord was telling me that what He had spoken to me before was what I needed to hear at this point in time. I had tears in my eyes afterwards because that feeling was so strong. People in the room probably thought I was just emotional because everyone else was feeling the Spirit and so was I, but I knew deep inside of me that the Lord had really answered my prayers - maybe not about healing my body, but about healing my soul. What a great night it was!

That is awesome to see the Lord's power and sensitivity to answering your prayers in a manner which he knew you would be able to recognize. Sometimes we tend to keep things to ourselves that are private, such as this. I have learned much about my own self from this post. Thank you for sharing all of your feelings regarding this day.

I am so glad you have such a wonderful relationship with auntie sigie and uncle ward, and especially Lisa. I bet you all have such great times together. I hope you don't mind that we look at your blog. You are truly gifted and very talented. Love You