A Fire Burns Inside of Me

No, it's not gas, nor is it my gallbladder.

I don't know what it is, but there is a fire burning inside of me to get as much food storage as I can, as quickly as I can. It is a deep, intense burning - something I can't deny. That's all I think about lately.

Tonight we went to Sam's Club after I got home from work. We walked every food aisle and very little of the extemporaneous aisles. About 75% of the things we bought were food storage related.

We bought a year's worth of:

We bought some other things for everyday meals, needs, etc. but feel good about adding these items to our storage. Now, we need to inventory all the other items we have and organize it all since it's strewn around the house here and there. It just feels good to be working on it though.

The picture of Sam's Club above is an artist's rendering of our new store. It just opened last Thursday. I really like the outside because it looks like a little small town main street facade. There's supposed to be a Peter Piper Pizza added eventually so that will be great because it will be so close to us then. The great thing about our new Sam's is that it's only about a mile away as the crow flies. It literally takes 5 minutes to get there! Yay...that will make it super easy when having to buy supplies for HFPE!

My very dear friend, Emily, used to live across the street. About 6-7 years ago, this sweet young woman was diligently trying to save money on her groceries so she could continue to stay home with her babies and be provident. She began using a couponing system called CouponSense. She was saving a ton of money and in her excitement, she shared this program with me. I decided to sign up and try it out.

Once I got my "system" down and really began understanding how it all worked, I became OBSESSED - literally. I looked forward to "Ad Day" each Wednesday and Sunday. It was a huge game to me to see how much I could save and what I could get free. One time, Emily, my friend named Sharon, and I all went grocery shopping on a Friday night around 9 pm. It was hilarious. We would go up and down the aisles together, then we'd separate. Each of us would find a great deal and we'd yell to the others across the store telling them "I found cereal for $0.50 a box!" or "these instant potatoes are free!" (Luckily we were pretty much the only people in this Sun City grocery store at that time of night.) We'd run back to the aisle and snatch up as much as we could. It was so much fun!

People made fun of us because we would each get 6 newspapers delivered on our driveways on Sunday. But, it was SO worth it! One time, when Fry's was having Double Dollar Days, Sharon and I went shopping together. I got over $700 worth of groceries for barely $200! The van was loaded! It stunk having to carry it all in, but it was sure worth it.

The picture below shows the results of one of my shopping trips. I got all of this for less than $35! A lot of this stuff is costly stuff! Head and Shoulders shampoo - normally at least $4 each and there are 6 sitting there! Alone, that's $24 at normal price. I have toothpaste and toothbrushes, deoderant, yogurt, soda, granola bars, ice cream, body wash, Downy, fruit, vegetables, Pledge towels, applesauce, pasta, BBQ sauce, candy, worchestershire sauce, Atkins drinks (normally $6.99 for a 4-pack), etc. 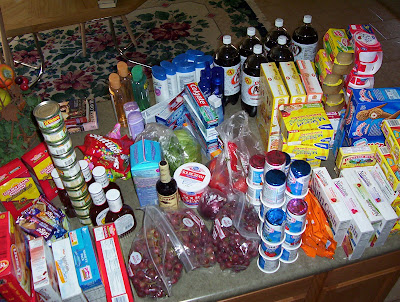 Well, back to my GRATITUDE for Emily, CouponSense, and divine inspiration....Heavenly Father knew what was going to happen in my life about 18 months later. He prepared me in ways I didn't even know at the time. When Rex walked out unexpectedly, he left me with no money whatsoever...other than $20. No money in savings. No money (other than that $20) in the checking account. No available credit on a credit card. No money available to pull from my 401k. Up to my neck in debt. And, two mortgages.

Because Em had introduced me to this program and because I had been successful at stocking up for the future (aka Provident Living), I was able to eat from and use my food/non-food storage while I got back on my feet. Aside from an initial trip to the grocery store for some immediate groceries, courtesy of my sweet cousin Lisa, this is how I survived for the first 6 months after he left. Mind you...he took 1/3 of all the food storage we had. But, I was left with enough to make it...and, I'm proud to say that even 4.5 years later (wow - where has that time gone?), I still have a number of non-food items left and even some canned items that have long expiration dates.

I was listening to the radio the other day and the person was talking about how they usually only have about 2 days of food in their house. That is unreal to me. What if a disaster WERE to strike? Think about all the people who would rush to the stores and the shelves would suddenly be bare. It is completely unfathomable to me. I have been trying to share the idea of the food storage program with a number of people at work but they just kind of laugh at me. I hope they don't find themselves in a situation some day where they wish they had listened and not laughed.

I am so GRATEFUL for the divinely inspired food storage program we have been given. It used to be that we were instructed to have 2 years worth of food on hand. Then, it was dropped to 1 year. Now, it's down to 3 months. Seriously, the leaders of our church are telling us - get SOMETHING. Be ready for what may happen. I remember thinking we needed all this stuff in case of a disaster. It's not disaster preparedness...it's emergency preparedness. And, isn't this economy feeling almost like an emergency to many of us? How much worse is it going to get? A lot, I'm sure.

That is so awesome that you got that much for so little! I really need to do that!!! When I called the other night, I figured out what was wrong with my machine but I wanted to chat with ya. Miss you lots!

I too have felt that urgency. There have been times that we have had to live off of our food storage. I am so glad that you are able to stock up on all those things at Sam's Club. Here I was thinking I was doing good because I bought one or two boxes of ziplocs and trash bags for FS this month. Thanks for making me look bad. LOL But hey, something is better than nothing, right?