I Got the Job!

Today was a great day!  I wore my new outfit - this top, with black dress pants and shoes that I already had, and this super cute silver and blue necklace: 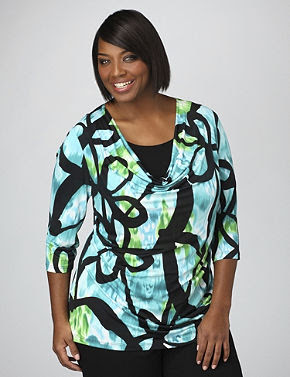 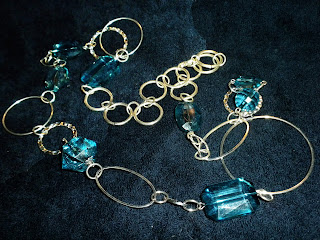 I thought I looked super cute, especially with my new stylin' haircut.  I headed into work and met up with the team.  Brad kept asking me if I'd heard from HR yet, I said I hadn't (How could I?  I didn't have a phone on the desk I was using).  Finally, I could overhear a phone call he was on and it was about me.  Soon, I was asked to go into an office and call this other guy back.
This was the call I'd been waiting for!  Yes!  I was offered the position!  A very nice raise was in store for me as well as a promotion to a higher pay grade that means my bonus target goes up too!  Yahoo!  I was psyched!  I guess it's not quite as exciting though knowing that you're probably going to get it as it is when there are a whole bunch of others that are going for it too and you're the one who gets it, but there were definitely reasons that helped me be more excited about it.
This is a very good move for me.  I will get to work with all of the senior management team in the division of the company I am currently in.  I will also get to know a LOT more about the business.  And, I am now officially part of the Finance team.  That is great because I am now able to learn more and more about my area of specialty.  I am really looking forward to that.  I'm burned out on hosting parties, planning volunteerism events, searching for bombs, managing people, etc., etc. while still trying to do the job I really love doing.
I worked for the rest of the day with my new team and got as much done as I could without a keyboard other than the one on my laptop.  A laptop just does not work for folks in the numbers world unless you have a separate keyboard or a number keypad (which I don't like using).  I will have to remember to bring a keyboard the next time I go to Chicago.
After work, I drove to Vernon Hills and went to Catherine's to see if they had anything new and different there that they didn't have in my store back in Arizona.  They had a few things that I put on hold because Wednesday was double perks day and I would get 20% off of them if I waited until then.
I then went to Olive Garden for dinner.  It was pretty quiet in there except for a table of Russians sitting in front of me.  They were speaking in russian and they had a cute little girl with them.  It was neat hearing her speak russian too.  Their waitress also spoke russian.  I bet not one of them knew that I could understand about 10% of what they were saying!  Yeah, it's been such a long time since I learned russian that I don't remember much of it now and it's very difficult for me - not that it was ever easy.  I think that had I been able to live in Russia for a semester or in the Russian language house on campus, I would have learned so much more.  But, neither I nor my parents had the money for me to do that.  Plus, I was just so burned out on school by my third year that I kind of gave up on going to russian class.  Bummer, I know.  Well, at least I can still speak spanish well enough to converse with and understand others when needed.
I left the restaurant and headed back to the hotel.  I parked in the cruddy parking lot again and actually had to stop to rest in the hotel lobby when I inside.  While there, I messed with my camera for a few minutes and took this lovely little picture of my Olive Garden bag and red lacquer purse. 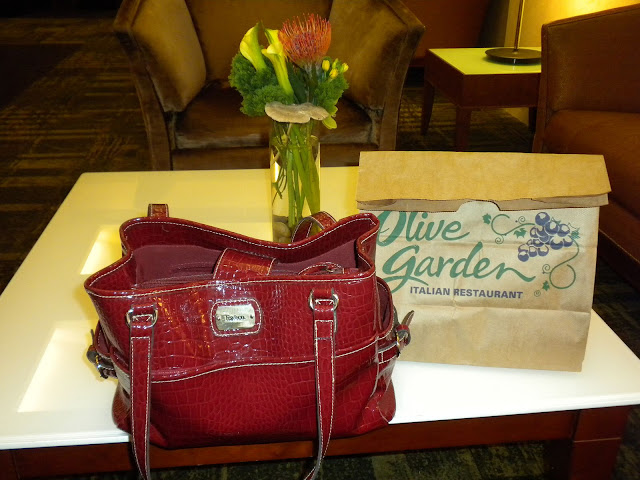 As I headed toward the elevator, I stopped in at the gift shop to look for something fun to take home to Melon Man.  I didn't find anything for him, but there was a super cute lime green lacquer purse there for me!  It was $45 on sale, but I decided that I'd spent enough lately that I just couldn't bring myself to buy it.  Oh, but was it ever cute!  And, it would have gone great with the outfit I was planning on wearing on Friday!  But, alas, it was not meant to be....so, off I went up to the 10th floor.  I'm super tired tonight and have a training class all day tomorrow so I'm going to bed.

Congratulations Sissy! I am so happy for you. You deserve the best!

When you are in Chicago sometime, you've gotta try:

Not sure what area you like to stay in but, we love staying at the Embassy Suites on North State Street. Love the full breakfast they offer at no extra charge.

Glad you got the new job. I'm sure you deserved it.

Yay! I'm so happy for you with your job promotion. You deserve it!

WOOOOO HOOOO!!! Congrats on your new job!!!!!!!!!! Fantastic outfit too! Love the necklace and can't wait to see your hair! We need to get together again!!! ASAP!