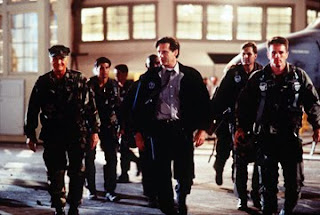 "In less than an hour, aircraft from here will join others from around the world. And you will be launching the largest aerial battle in the history of mankind. "Mankind." That word should have new meaning for all of us today. We can't be consumed by our petty differences anymore. We will be united in our common interests. Perhaps it's fate that today is the Fourth of July, and you will once again be fighting for our freedom... Not from tyranny, oppression, or persecution... but from annihilation. We are fighting for our right to live. To exist. And should we win the day, the Fourth of July will no longer be known as an American holiday, but as the day the world declared in one voice: "We will not go quietly into the night!" We will not vanish without a fight! Today we celebrate our Independence Day!"
Seriously...one (some) of the best movie lines ever.  It brings chills to me everytime I see/hear it.
Have we forgotten what the true reason is for our upcoming celebrations this weekend? All week long, I've been hearing Happy July 4th! Have a good July 4th! Celebrate your July 4th in style!   The holiday this weekend is not because it's the fourth of July...it's because we celebrate our day of independence from the overbearing arm of British rule 234 years ago.  So many men fought on our behalf during the Revolutionary War to give us these freedoms that we now enjoy.  War back then wasn't like it is nowadays.  Now, we use planes with bombs on them.  Now, we have machine guns and mortars and heavy artillery that can take out a large number of "enemies" in a quick amount of time, often with immediate results and less suffering to those who are killed.  However, that was not how it was all those years ago.  Back then, they used musket guns with bayonets attached.  The guns were quite heavy, not too accurate, and the bayonet - yeah, wicked.  I can't imagine the face-to-face combat they had to endure...the stabbing and slaughtering.  But, these men suffered through all of this to give us our independence.

Independence. What truly is independence? The dictionary defines independence as "not subject to control by others: self-governing." Unfortunately, I have never been a fan of reading, nor a fan of history - until now.  With the movie, National Treasure, the Work and the Glory books, and a few select other types of media, I have developed a desire to learn so much more about our history.  What I do know though, is that our ancestors came to this country to have a better life.  They came to live on their own - free from the oppression that they had been under.  To live free from rule.  Not free from law, but free from excessive taxation, government without representation, and more.  They just wanted to live in peace in their own country.

The death toll, although relatively low in comparison to other wars such as World War II, was still quite high.  The war lasted for about 8 years and there were about 3,000 casualties per year.  So far in our "War on Terror" (i.e. Operation Enduring Freedom (Afghanistan) and Operation Iraqi Freedom (Iraq)), we've lost 5,561 American lives which is a little over 600 casualties per year.  However, if you look at American lives lost in these conflicts versus overall U.S. population during those years, the difference is staggering and one can see how the impact was so much greater during the Revolutionary War (not that the loss of one life is greater than another!)  In 1776, the U.S. population was 2.5 million, verses 308 million in 2010.  This means that in the American Revolution, we lost 1% of the population compared to 0.002% in the Iraq/Afghanistan conflicts.  That really is a significant difference.  If we were to apply that same percentage to today's population, that would be a loss of 3,080,000 lives.  That's one in 12 people in the state of California, or 1/2 of the population of Arizona, or all of the population of Utah plus half of of the population of Vermont.  It really puts into perspective the impact those deaths likely had on the communities of that time.

I'm so grateful to live in a country where I can do almost anything I please.  I'm grateful that those men fought for our freedom so we could live in the best country in the entire world.  Yes, I'm sure other countries are lovely and they don't get picked on like we do, but people still want to come here because of the opportunities available to all.

So, tomorrow, we celebrate.  We celebrate ON the fourth of July because it is our Independence Day.  May we always remember the true reason for that day off of work, those backyard (or indoor here in hot Arizona) picnics, the great red, white, and blue decor, etc.  It's not because it's summer...it's because we're FREE!

Great post. Thanks for putting down all the history behind it. I loved reading it.