What Kind of People Live in My Neighborhood?!?!?

About 18 months ago, we discovered that our next door neighbor's brother had moved in with her and he was a Level 3 sex offender.  Yes, a Level 3!  That's the worst level.  After a year and a half of feeling somewhat scared living next to him, he's finally moved on and now lives with his mom about 100 miles away.  So, finally, I felt some peace that he was gone.  In fact, his sister even talked to me for the first time in all that time tonight.  Of course, she explained that she had been embarrassed and that's why she would avoid us.  Oh well, over, done with.

The past few months, I've noticed that some of the yards in the neighborhood have really been going downhill.  One in particular is 3 doors down from us.  There are tons of weeds and the vehicles are often parked on the lawn.  There were boxes EVERYWHERE for about a month and they weren't moving boxes that were ready for the recycle pile.  It really was kind of odd.  The police would come by every once in a while and kind of just slowly drive by the house.  I tried talking to them about the house, but they wouldn't really give me any info.

Well, a few weeks ago I noticed that one of the cars was gone for a while.  But, I didn't really think much about it.  However, just yesterday as I was leaving for work, I picked up the newspaper from the driveway and went to throw it away but something on the front just caught my eye.  The headline was "Surprise woman and 3 others charged with false reports."  But, what really drew my attention was a picture of my neighbors who live in that messy house.  At first, I wasn't sure if it was them, but the address in the article was right here on our street and tonight, as I left to run an errand, I saw the woman and sure enough, it was her.  Here's the article about what happened:

Surprise, Ariz. -- A Surprise woman was arrested for false reporting and conspiracy after she claimed she was kidnapped and raped, but it turns out she was mad at her ex-boyfriend.

On June 5, Karyn Godfrey, 33, and her then-boyfriend, Devin Ficklin, 18, reported her vehicle stolen after police found it had been driven into a wall at an apartment community near Bullard Avenue and Greenway Road in Surprise. 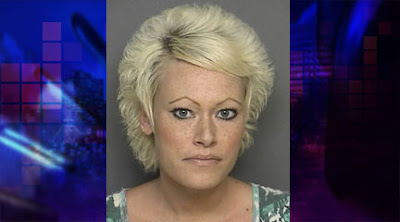 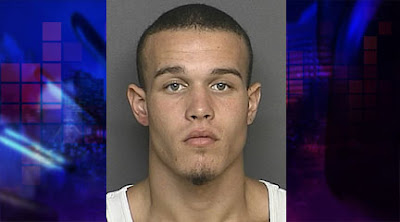 According to Sgt. Mark Ortega with the Surprise Police Department, Godfrey contacted police four days later and told them that her report of the stolen vehicle was false.

Detectives arrested Ficklin on June 16 in Chandler. At that time, Ficklin reportedly admitted that he and Godfrey did crash the car, but that Godfrey's rape and kidnap allegations were false.

Ficklin went on to say that a few days after the wreck, he broke off his relationship with Godfrey because she was old enough to be his mother, according to Ortega.

On June 23, detectives questioned Maci and Raven Roy and found inconsistencies in their stories. Ortega said the Roys then admitted that their statements were false and had been fabricated by them and Godfrey to implicate Ficklin.

On Wednesday, Godfrey was questioned again and reportedly confessed that she had fabricated the story. When asked why, she told detectives that she was "mad at Ficklin" because he had wrecked her car and had promised to stay with her but didn't.

Maci and Raven Roy were charged with false information and conspiracy. Ficklin faces charges of false reporting, conspiracy and leaving the scene of an accident.

So, that's the story.  In the story they also mentioned the general vicinity of the address where the woman was arrested "at her home" which was right on target for her house and ours.  What's so strange about all of this, too, is that I'd never seen these people before July 4th.  While we were all standing out on the sidewalk watching the fireworks at the stadium, these people were standing across the street watching them.  The woman even called the guy "daddy" to her son.  Weird.  Weird.  Weird.  I so wish we could sell our house and get out of this neighborhood.  It's starting to turn bad.

I totally wish you could move - to Utah. There is the perfect house for sale on my street. I know you love AZ, but we would have so much fun. The boys would love to have their Auntie and Uncle Clintamous right down the street!

Great story! And, on your street no less.

Can't wait to see you!

Okay-that is not the kind of stuff you want in a neighborhood, but I've learned that no matter where you live: rich, poor, gated or not, you would be surprised at the private lives of neighbors!

BTW: did anyone else think her eyebrows are creepy?