I went to the gyno today because my bleeding has picked up again - a little more than just a little spotting - and that is irritating.  The next two months would be good for me to have to have a hysterectomy because we're just getting ready to move into our slow season (THANK GOODNESS!).  However, the gyno wants to try out a medicinal routine for the next 3 to 6 months and see if that helps and then we'll go from there.  I kind of tried to beg him to just go ahead and take it all out, but he disagreed.  On one hand, I see his point - that "stuff" is meant to be in a woman for a reason.  It has multiple jobs to do.  If a woman doesn't have it, sometimes other things get fouled up and life just turns to major wretchedness in a hurry.  However, on the other hand, I've dealt with this crap for 24 years and I'm tired of it and just want to feel good and not have to worry if I'm leaking through my pants onto a chair and leaving a stain.  Plus, I'd really like to be able to wear white shorts again come summer!  However, I gave in and agreed to try the medicinal route for the next 3 to 6 months.  If that doesn't work, I wonder what will be next.  But, either way - if things aren't right by next November, I WILL be having that junk taken out of my trunk.

Okay, so on to the real reason you're probably reading this entry...

Melon Man and I met at the eye doctor's office today and picked up our new glasses.  I'm still not too sure about mine and his are just so blackish green that I'm not sure about his either.  But, at least they aren't the birth control glasses that he wanted to get.

After we were done there, we drove over to Famous Dave's for dinner.  I had a really good BBQ chicken salad and he had the brisket plate.  My salad was actually pretty good, even though I'm not a big fan of Famous Dave's.  Nothing compares to Phil's BBQ in San Diego - NOTHING.  Plus, for what we paid for dinner at Famous Dave's, we would have gotten twice that at Phil's.  Oh well.

After we finished eating, we sort of raced each other home, but I had to stop off at the dry cleaner to pick up Melon Man's dress shirts and Sunday pants.  I love that the dry cleaner has a drive up.  So convenient!  The kid came to the drive up, took my card, and was gone for just a little too long for my comfort.  Why he didn't use the register right there, I didn't know, but I didn't think much more about it...until a little while later.

About 30 minutes after getting home, I got a call from GreenGeeks.com calling to verify my order for new web hosting service.  At first, I thought the guy was trying to sell me web hosting service for the business I no longer have.  But, then I listened a little more carefully.  The man told me what kind of card was used, he knew the last 4 numbers of my card, he knew my name.  Okay, so I thought, he's trying to get me to give him more info so he can use my card.  But, I've been in this business long enough to know what questions to ask and what is real and what isn't.  I was suddenly getting a pit in my stomach.  I asked him a few more questions and he gave me a few more answers.  Nice....not.  I knew this did not look promising. 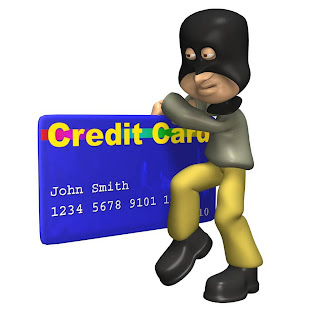 I hung up from talking to him and immediately called the credit card company.  Yep, it was "my" credit card company...that's the only card we have and we use it for EVERYTHING.  We only use our debit card for places that don't take "my" card (yet).  I spoke to a rep who verified that there were 3 other authorizations on the card that we didn't make - two to additional web hosting companies and one to Netflix.  Eh?  We have NEVER used Netflix before.  I got our account closed down and reissued.  I called the police department and filed a report.  Now I have to fill out an Identity Fraud Victim affidavit and take it to the police station.  This sucks.

I really do think it was compromised at the dry cleaners.  That was the only time it was out of my sight today and everything happened so quick after I went there.  They must have a skimming device or something.  What a crappy mess.  At least we're not responsible for any of the charges.  I certainly hope this doesn't create a much bigger mess.