On My 7th Day of Christmas Break...

...I still felt like crap and it took me all day to do almost nothing at all.

Yeah, this sickness is really sucking the life out of me.  I start to do stuff and it takes me forever because I just don't have the energy to do anything.  I cleaned off the kitchen table today and it took me almost the whole time that Holly was here cleaning.  I folded a load of towels and put them away.  I gathered up all the leftover baking supplies and put them in a box to be moved elsewhere since the cupboards are full right now. 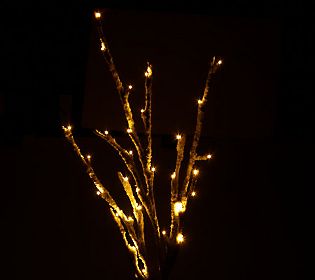 By evening, it was time to start setting the table for tomorrow.  It always takes me a long time to do it - to get it just right - and it was no different this year since I am doing an entirely new style and theme.  With ironing the tablecloth and all the napkins and then figuring out how to put all the candles and such on the table, it took me over 4 hours off and on to do it.  But, I have to say....it is SPECTACULAR.  I ended up not using the "punch" of color that I was going to use, but I'm okay with that.  I had to have Holly raise the chandelier over the dining table too since the centerpiece ended up being really tall.  But, I love the centerpiece because it IS so tall and has cool lights in it that will light up the table just right and there is plenty of room to see all around it so we can have good conversation.  I got these light sticks from QVC a few months ago and once I received them, I wished I'd ordered two sets!  So, I went online to order another set and they were on waitlist only!  Bummer!  Well, I put my order in for another set back in November and just today I received an email that the new set was on its way!  Too bad it's not scheduled to arrive until January 3rd.  Oh well.  I'll make do this time.  They are awesome and this picture doesn't do them justice.
Since we are going to be 11 plus a baby this year and our table can only seat 8-10, I was planning on putting a card table at the very end of the regular table.  But, after working on the main table while I waited for Melon Man to buy a new card table since our old one apparently died some time ago, I decided that it will be best to keep the two tables separated so it is easier to move around to get food.  So, I'll set that other one up just before everyone arrives tomorrow.  Will post pictures of everything in tomorrow's entry.  I'll just say...it's VERY SPARKLY and I LOVE IT!

I ended the night sitting on the sofa, enjoying all the candles and lights, eating some pasta and drinking some Martinelli's.  Love the Martinelli's.  Always makes me feel a little more festive.  Decided to brave the grocery store at 6:30 a.m. tomorrow instead of today/tonight.  Just works better for me and usually there aren't any lines so that is good for me considering I feel like crap and would be totally irritable standing in a line for a long time!