You're Such a Droid!

One of our big errands today was to get new cell phones.  Ours were two years old and it was just time.  They would shut off at the drop of a hat and some of the buttons were getting a little more difficult to press or get to work properly.  Plus, we were just way behind the times - well, I felt I was...Melon Man only just got his first cell phone ever two years ago.  Plus, I was so very tired of never being able to get service at home.  So, we decided to look into switching to Verizon from Sprint.

We had stopped in at the Verizon store earlier in the week and it was so busy.  There were people everywhere!  They had a little kiosk where you had to check in to get put on a waiting list.  Huh?  Okay...I'll go through the motions...so we were added to the list and about 10 minutes later were being helped.  I knew the plans at Verizon were higher priced, but surely you got more minutes or longer free hours or something, right?  No.  Plus, with wanting a "smartphone" we would also have to pay for a "data package" each month.  So, let me understand this whole thing...we want to move into 2011 with modern phones.  We have to pay an extra $46 a month.  We get half as many minutes as we have now.  Our free calling hours move back 9 p.m. from 7 p.m.  And...to top it all off...I have to pay HOW MUCH for a phone?  You'd surely better be giving me another one for free!

So, we left there a little discouraged and decided to head over to the Sprint store, just 1/2 a mile away to see what they would offer us to stay since I'd had an account with them forever.  We pulled up to the store and what a difference!  There was ONE salesperson on the floor talking with ONE customer - who, once we walked in, left.  I explained to the woman what we were wanting and about the service issue of not being able to use our phones in our house and she essentially washed her hands of the whole problem.  I was NOT impressed, to say the very least.

It was at that moment that I determined that the extra money, the fewer minutes, and everything else was well worth it to switch to Verizon.  I was able to easily justify the fewer minutes since practically everyone we talk to is already on Verizon so those calls will be free no matter what.  They DO have the best coverage out there.  And, they had way better phones with far more features.  So, today, we headed back there to switch over.  About 90 minutes later (we decided to wait for our original salesman to finish with his customer since they work on commission), we were finally out the door with two very nifty Droid 2 Global smartphones - one in black on black and one in red on white - both with Qwerty keyboards. 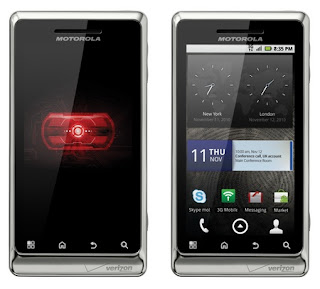 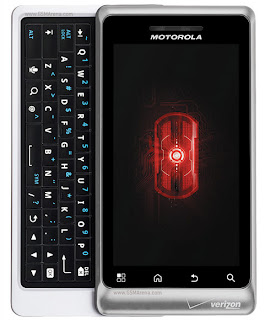 Of course, Mr. Anti-Technology was the first one to start using his phone and downloading apps.  His first download was an air-horn.  An air-horn?  Seriously?  Yep.  And he just kept blaring it!  He just amazes me with the things he finds funny sometimes (I say this with a huge grin on my face, because he just makes me smile with his quirkiness!).  He was downloading app after app.  Some were good, some not.  So...how do we uninstall some of these?  Did you know these phones don't come with books anymore?  Oh.  My.  I.  Feel.  Old.  (We did eventually find the instructions for uninstalling the app - on the phone.)

I LOVE my Droid! You guys will have a lot of fun with them!