Long before we found out that Taylor was really sick, we'd made arrangements to go to Disneyland with Kurt, Ang, and the kids.  It was a total surprise to the kids...they had NO idea we were coming!  Last Sunday in church, Melon Man leaned over to me and suggested that we leave mid-afternoon on Monday instead of early Tuesday morning, go through San Diego (an extra 90-ish minutes or so) and stay the night there after going to Phil's BBQ for dinner.  That was a suggestion that I couldn't resist!  So, I came home from church that day and made a hotel reservation for us and changed the dog kennel reservation.  Two days later, I realized that Phil's is closed on Mondays and we wouldn't be able to have dinner there after all!  Oh well, we said.  We'd just go to Filippi's Pizza Grotto instead...which we did.

We checked into the hotel and then made our way to Filippi's Pizza Grotto for dinner.  We decided to get an antipasto salad along with our pizza.  It wasn't my "cup of tea" but Melon Man liked it. 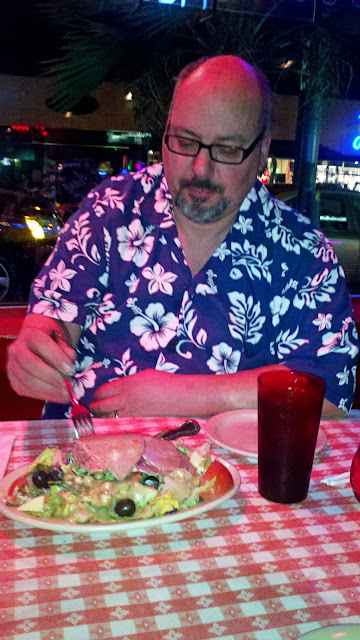 We ordered a pepperoni and sausage pizza this time.  We usually only get pepperoni.  I wished we'd done that again this time.  There is just something about the way the taste changes when you add the sausage.  Although the sausage is delicious, it just changes the taste we're used to. 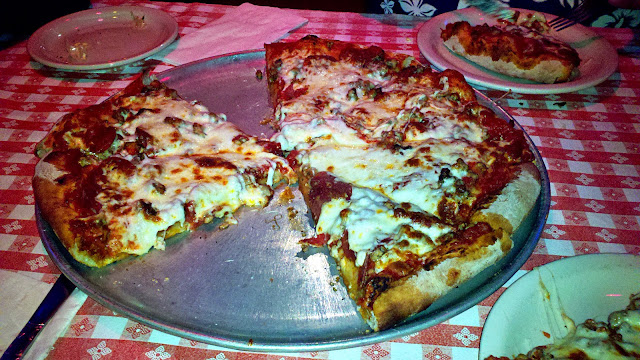 We ate about half of the pizza and then took the rest back to our room with us and stuck it in the fridge.  That pizza was heading to Disneyland with us...we just couldn't forget to get it out of the hotel room fridge in the morning!

We went back to our room and watched TV for a while.  Melon Man fell asleep on top of the other bed in the room (they didn't have any King bed rooms) and so we ended up sleeping in separate beds - which was actually okay since they were smaller beds and I hate being squished when I sleep.

We're off to Disneyland in the morning...we're going to try to surprise Kurt and Ang and the kids by showing up even earlier than Kurt and Ang are expecting us!