It's been quite a difficult time blogging the last few days.  I just haven't felt like it since we heard about Taylor's cancer.  But, I feel it's really important to keep blogging about what's happening so I can get my feelings out, keep folks updated, and just document life - whether it sucks or not.

So, I hope Jen doesn't mind, but I'm going to grab a bunch of stuff from her blog so I don't have to retype a lot of it.  Plus, she's put a lot more on there than we share in our conversations everyday, so it's better than relying on my memory.

I won't share her personal thoughts and feelings because those are so very personal, but I can say that they are truly valid.  Her fears, her tears, her thoughts, her feelings - all so very valid.  And, I think I'm feeling many of them today with her.  I have cried a lot today.  People at work have been nice to ask why I look so sad.  I start to tell them why and I break down crying.  Some have said they will pray for Taylor.  I truly hope they do.  It's been really hard to focus today.  There was a 3-ward fast for him yesterday in his stake - the 3 wards that they have lived in since they moved to their town.  How awesome is that?  They love him so much!  A lot of our family fasted again for him as well.  I fasted for him.  But...when I closed my fast yesterday in prayer, I begged Heavenly Father to let us keep him but the most overwhelming feeling came over me that my prayers were in vain and he would not be with us much longer...that Taylor's time here on earth is almost done.  I think that's why I have sobbed so much today.  How can God take such a fine young man back to Heaven so soon?  I mean, what an example this young man is!  He's gone to church the last two Sundays so he could bless the Sacrament - because he doesn't know for how long he won't be able to.  He went home teaching yesterday so it would be done for the month - because he doesn't know for how long he won't be able to.  He prayed for the Lord to strengthen his testimony and he got cancer.  Why?

So, to recap what's been happening lately... 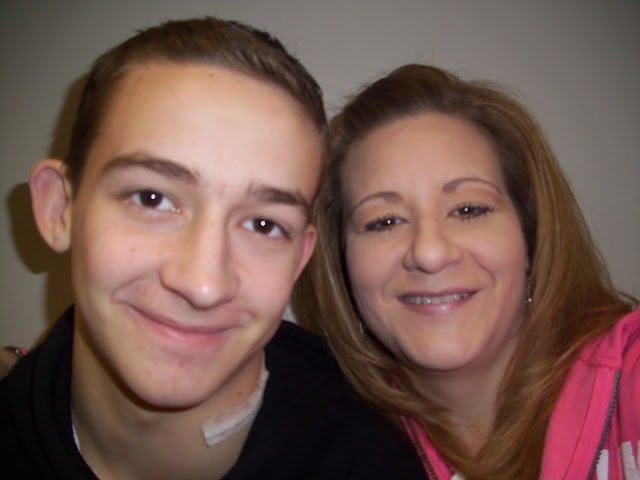 An except from her blog...


Today went much faster and easier than we expected. Whew! There's a phrase that I could get used to saying.

We arrived about 40 minutes early for our first test. The PET scan. As we were entering the building, Shane said, "What are we going to do for 40 minutes?" I said we should check in and maybe they would take us early. Wa La! I was right.

We checked in, Shane went to use the bathroom, Taylor and I hadn't even gotten the chairs warm, and before Shane could return from the restroom they had placed Taylor's I.V. and we were on our way!

We discovered the reason for the wait for the staging until today. The PET scan machine is in a semi trailer. It is so expensive that very few hospitals own one of their own. It is inside a trailer that visits different hospitals on certain days of the week and they all pay a portion to use it. Genius!

Taylor was NOT thrilled to find out that he was going to have to drink the contrast. He kind of went into a panic mode. But the tech explained that it was only a liter and that the taste had come a long way in the past few years. That took the edge off his panic.

We went out to the trailer and got settled in. The room we were in first, was similar to being in First Class on an airplane. Two comfy chairs sectioned off from everything else, pillows and blankets and a nice big drink for Taylor - contrast. Taylor actually chugged the contrast. He had all of it downed in less than 20 minutes. We actually had to wait to let it settle before the scan because he drank it so fast. Then they had him use the bathroom (since he would have to lay very still). They took him into the scan area. I helped him get undressed, lay down and covered with blankies and then I was escorted back to the First Class room. 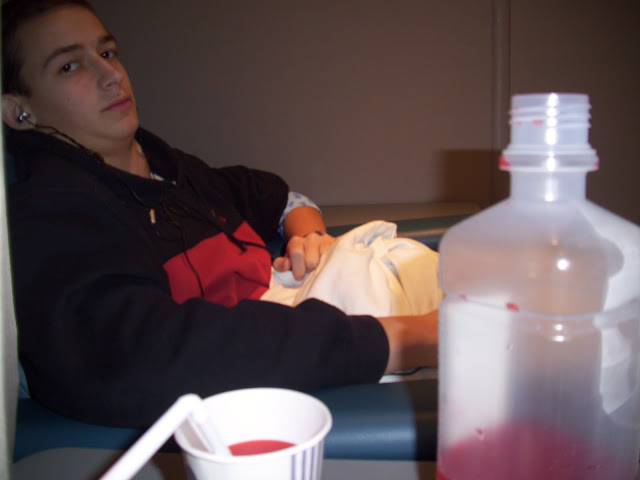 After the PET scan we were informed that several of the other scheduled tests wouldn't have to be performed because they were just done before his surgery. They said we could get Taylor something to eat and to be back for his ECHO at 2 p.m. We decided we would have lunch at The Pie.

We returned to the hospital before 1 p.m. and checked into the cardiology unit. We only waited a few minutes and we were taken back. The ECHO went a lot quicker than we expected. Wow is all I can say! We had to check with the Oncology dept before leaving to see if they wanted to leave Taylor's I.V. in until tomorrow or not. They did.

Then, we got the news we had not wanted to hear...again, an excerpt from Jen's blog...


Apparently Taylor's case is pretty complicated and everyone likes to weigh in on it. They had several doctors going over the scans and trying to figure things out.

Here's what we were told. Taylor is at a stage IIB. In layman's terms, this means the cancer has spread to two areas in the body that are in the same region. Taylor's is in the neck and below the collar bone. The B means that it is more aggressive and shows more outwards signs. (Such as fever and weight loss), which Taylor is experiencing.

However, they are concerned that he could be a Stage III or IV because of the size of his spleen and some things that are going on with his organs. Because of his colitis it is hard to tell for sure what is happening with some of them. So, we really don't have a "definite" stage yet. Best case a II, worst a IV.

On Monday they will take a bone marrow sample to help them evaluate things better. They will also put in a Port-o-cath (which is a semi-permanent i.v. line which sits in the chest under the skin) and run more pulmonary testing (to make sure his heart and lungs are strong enough to stand the chemo treatments).  We should have the results of this testing by Wednesday, at which time they will decide the proper dosage of chemo. Either way, he starts chemo on Thursday. It is just the dosage that remains in question at this time.

If we remain IIB they will do chemo two days in a row. Have a week off. Receive another treatment and then have 21 days off. That cycle will repeat for six months. Then once that is done, he will have radiation 5 days a week for 4-5 weeks.

The doctor flat out told Taylor that he is going to feel like crap probably until near the end of summer. Also, that he will start losing his hair by the second round of treatment. That his school days are numbered. They said he will be too weak and it will be too hard to concentrate to continue attending. Also, he can't be around the kids and all the risk of infection.  He was to the point and very up front with Taylor and I think Taylor appreciated that.

Like always, Taylor handled it well. One of his biggest concerns was about losing his hair. He said we are going to have to buy him lots of hats and he couldn't wait to call Auntie Kristin and tell her she only had a month until she had to shave her head.

Yes...I'm totally willing to shave my head for this kid to help him get through this!

Today, they had the bone marrow biopsy.  They took pieces of actual bone from his hip and also marrow from his bones.  They should have an answer on Wednesday.  My stomach is going to be in knots until then.  I know how I am feeling so I can only imagine how my sister and her husband are feeling.  I feel so helpless from so far away.  I just wish I could be there with her and stand in for our mom which I know she is missing terribly.

Thanks so much for posting updates. I had a flood of memories as I read about all the tests. I am so sorry Taylor has to go through this! My heart goes out to him, his family, and extended families. Love and prayers. Aunt Marj