I've been working a lot in my new job and so I haven't had time to do much of anything like blogging or such.  It's even late now and I should be in bed since I have to get up in 5 hours, but I just wanted to write a few things to kind of catch up on what's been going on.

Saturday - April 2 - Had family and friends for birthday brunch at The Coral for Melon Man's birthday.  Got to see Tere and Lary, Anissa, Robyn, Olivia, and Landon, Lisa and Craig, and Dave and Linda.  Missed Nik, Auntie, Uncle Ward, Natalie, Robert, and John - who all ended up either working, sick, or taking care of sickies.  Lots of food, lots of fun.  We were going to go to Lowe's afterward to pick up a couple things and look at getting an estimate for a Trex patio/deck doohickey thingamabob, but were too full and too tired so we went home.  Melon Man had to go right to bed so he could sleep before going to work that night but I sat and watched the afternoon session of General Conference while unzipping digi scrapbooking files and organizing them on the laptop.

Sunday - April 3 - Melon Man pretty much slept through the first session of Conference.  I worked again on digi files.  Made corned beef and cabbage again for lunch.  Ate too much of it and totally got sick to my tummy and spent a LOT of time in the tinkletorium.  Worked on my 2008 blog book while listening to Conference.  Oh man, do I ever have a huge book to work through!

Monday - April 4 - Worked until the last possible moment and then tore off down the highway to get home to go out to din-din with Melon Man for his actual birthday.  I decided we'd go to the chinese choke-n-puke for dinner since he really likes that.  I was up for it.  But, unfortunately, he wasn't up at all when I got home.  I attemped getting him to get out of bed at least 8 times and he still wouldn't get up.  He was fine, just tired too, I guess, so, I gave up.  I'll try again another night this week if I can get out of work early enough to do so.

Tuesday - April 5 - Worked a longer day today.  We decided to go to Applebee's for dinner since it was late when I got home.  Jennifer is still waiting to hear from Taylor's doctor as to whether or not they wll be able to come this weekend.  It's not looking likely because of Dog.  The doctor is just too worried about the germs that Taylor may be exposed to because of him.  To be honest, I am too.  Dog is an inside dog, but of course, he still has different germs than Taylor is used to so it could be a problem for him.  Plus, my cough (from when I was sick in DECEMBER!) has really picked up in the last few days and I sound like a dog that's been barking for three days myself when I cough.  I would be devastated if they came here and Taylor got sick (or worse - died) because of Dog or me.  I'm sure the Lord knows best and will guide the doctor in giving the appropriate answer to Jen and the doctor in due time.  Poor little Jonah had to go through a colonoscopy today to check him for ulcerative colitis.  Jen is dealing with so much right now - it's hard not being able to be there physically with her to help her cope, etc.  The trip down here would be so good for all of them.

Wednesday - April 6 - Worked until 7:20 p.m. then jumped onto my broomstick and hurried over to Lisa's for dinner.  Her sister, Cindy, was in town along with her daughter Christine, and we were going to have a big taco dinner.  I felt bad I wasn't able to be there until later because I was working on finishing up a presentation that had to be sent off to Legal for final review.  But, that's the way life in the corporate world rocks and rolls sometimes.  Had a good dinner when I arrived and then got to visit for a bit.  Looked at what Cindy had done on her blog book from 2007 that she's been working on and offered a few pointers from the experiences I've had in doing my own.  She's done a very good job so far.  She is very methodical in her thinking process and she and I are very alike in that respect.  When she gets it all exactly how she likes it, then she'll be done - with that one - and then she can start on the next one!  I am only on page 62 of 224 in my 2008 book so far.  I'm sure she will probably pass me up soon enough (in getting yearly books done - I'm on 2008 and she's on 2007) but her doing hers at the same time keeps me inspired to keep working on mine!

Thursday - April 7th - Worked late again last night - until 8 p.m.  Another 12 hour day.  I know I said I partially wanted this job to avoid all the long hours I was having to work before, and I think I will eventually get to that point, but right now there is just so much to learn and so much to do, that it's likely not to happen for a little bit still - although, I am really going to try to stop doing the 12s and try to get them down to 9s or 10s instead.  Talked with Julie for 2 hours, 47 minutes, and 36 seconds (really - that's what the clock on the phone said) helping her review her divorce papers after I got home.  Then went to bed.  Glad tomorrow is Friday.

Friday - April 8th - Actually left work at 5:30 today.  Told my co-worker, Dustin, why are we still here?  Everyone else is gone...let's go.  So we did.  Plus, Melon Man and I were going to try going out again for his birthday dinner.  But, when I got home, he was too tired to get up and go.  So, I just worked on my blog book for a bit until he got up. 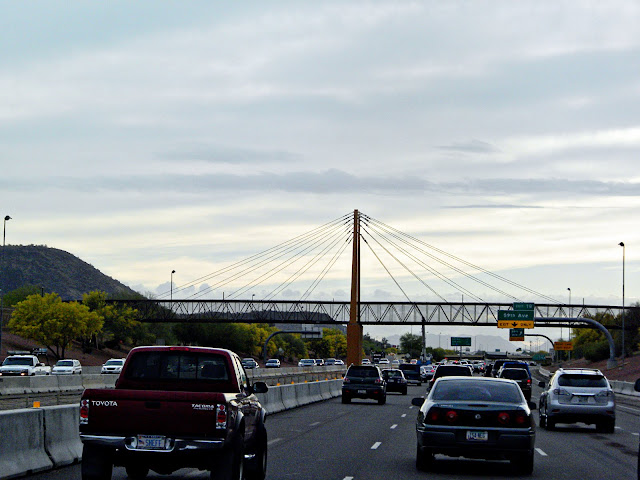 As I was driving home, I was finally able to get a picture of this new suspension pedestrian bridge over the 101.  It was just put up last weekend.  It was weird - one day it wasn't there, the next it was.  It's really quite a site and kind of looks out of place.  You don't usually see suspension bridges over freeways - moreso over canyons, rivers, etc, not freeways.  It's been causing backups on the freeway all week as people drive under it and check it out.  Hopefully, with time, it won't continue to cause such a curiosity factor.

So, that's about it for this week.  It's supposed to be cold and wet this weekend.  I'm looking forward to it.  It's only supposed to be in the 50s for the high tomorrow.  Last weekend, it was almost 100*.  What a change!

I saw the bridge and think it is gorgeous.

Going to finish my blog book this week now that the kids are back home in AZ and life here gets back to some normal.