Lately Jennifer and Taylor have really been having a hard time with having to "sit around and wait" for this cancer crap to be over.  It's really been bringing them down.  It also doesn't help that winter just doesn't seem to be getting over up there in Utah - it's still been snowing periodically.  It's freaking April, for heaven's sake!  They both struggle with seasonal depression somewhat so I decided I would make something that would hopefully help them see the light at the end of the tunnel - the good light - not the "bad" light - if you know what I mean!

So, back at the end of March, I came up with this (I've just kept forgetting to blog about it!)... 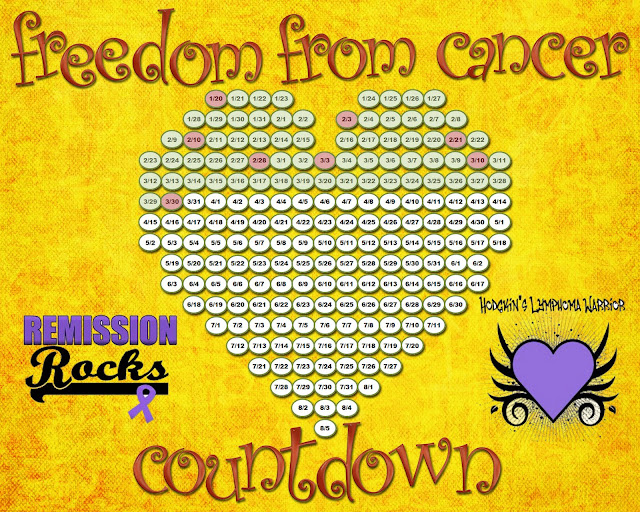 It kind of reminds me of those missionary countdown calendars.  August 5th should be Taylor's last radiation treatment so that is the ending date.  The first date is the day he found out he had cancer.  Each of the red dots are either momentus bad days or chemo days.  The green dots are normal "good" days.

I had it printed in an 11x14 or 16x20 size (I can't remember which!) at their local Sam's Club so all Jen had to do was pick it up.  I totally forgot that they have a side-by-side fridge rather than an over-under kind when I designed it.  I meant for it to go on the fridge and instead she will have to find another place to put it.  Oh well.  I hope it helps cheer them up a little.

Since I first made this, they've now progressed through two more of the widest lines.  Little did any of us know, but by the time that Jen posted the picture she took of the chart on April 26th, they were already 2 days past the half way mark!  We're on the downside now to August 5th!