It's Time for Prom!

How do I put into words what I am feeling tonight?  I just had to before I go to bed, even though I'm not feeling well at all.

The last 24 hours have been incredible, to say the least.

A year ago I began helping Jennifer with her Stake Girls Camp responsibilities.  I drew incredibly close to her, to our Savior, and to 400 girls that I never met...all through working on behalf of the youth.  It was one of the most spiritual experiences I have ever had in my life.

Since January of this year, I have been part of the Prom committee for the joint stake LDS Prom.  Again, I am so touched by this experience and working on behalf of the youth.

Tonight was the Prom.  We all arrived around 6-ish to finish setting up any last minute items.  The grounds were beautiful.  The lights in the trees, the pom-pom flowers, the setting sun, the jars with candles hanging in the trees, the white chinese lanterns, the valet parking, the italian sodas, the cupcakes, etc.- all of it, just beautiful.

The night soon turned to worry though as around 6:30, Bishop Bradford received a phone call that there had been an accident and 3 cars of prom kids were involved.  Our hearts sank.  Why?  Why would this happen to kids who very likely had not been drinking and had CHOSEN to come to this prom instead of a worldly one?  We all were quite dumb-struck for a couple of minutes, just worrying/wondering what had happened.  But, Bishop Bradford and someone else took off and headed immediately for the accident to see what they could do to help.  The interesting thing I noted though was that as we continued to work, the Spirit set our minds at ease and we didn't worry - we just felt like everything would be okay.

Word soon arrived that most of the kids were okay.  The second of three cars had struck the first one pretty hard and unfortunately, the kids in the back seat of the second car were hurt the worst because they hadn't been wearing their seatbelts.  Then, we found out that the one hurt the most was Garrett Jones, the winner of our creativity contest.  That set my feelings on edge again.  I had been the one to call Garrett and let him know that he had won the contest.  The excitement and shock in his voice was so wonderful that evening when I told him.  I had made an adult/teen connection with him and had had glee in my heart when I told him and heard his reaction.  Now, I felt a pang of sadness and despair.  I wasn't going to be able to meet this upstanding young man this evening.  I prayed that he would be okay.  His date had a bloody nose and he had a concussion.  He was slipping in and out of consciousness.  The sadness and worry stayed with me the rest of the night, but I put on a happy face and pressed on.


I was assigned to work the registration table.
(Yeah, kids beware, fat lady ahead...) 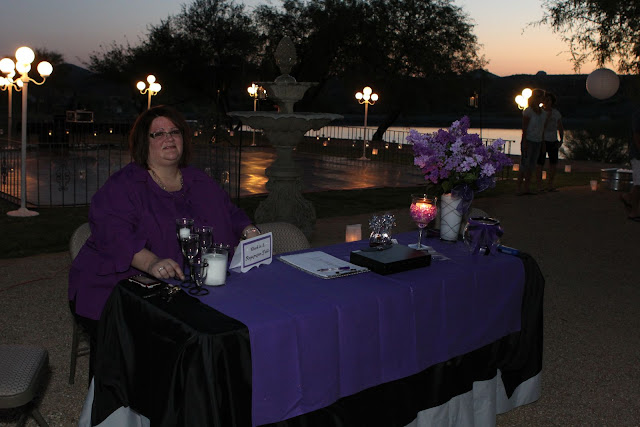 As the kids arrived at the valet parking area, they were greeted by this beautiful canopy draped in lights, with silver stars, purple pom-pom flowers, and chinese lanterns all hanging down, lined with luminarias. 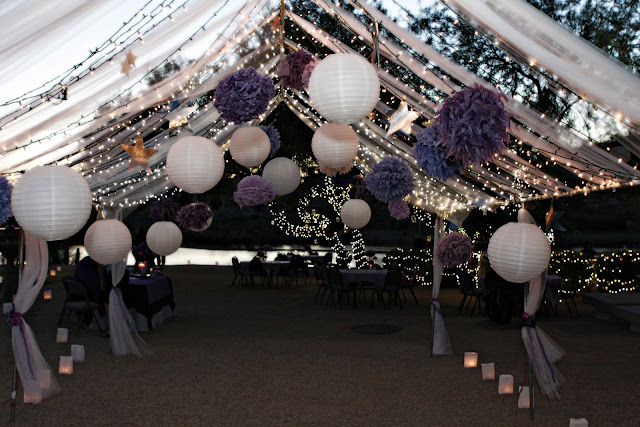 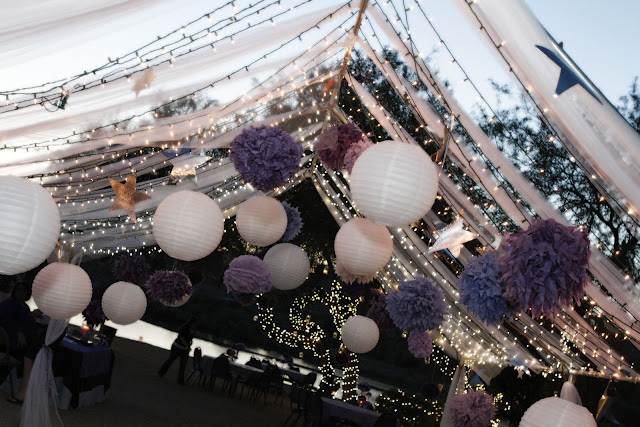 And then, this was the view as they came out of the canopy and into the "mingling" area. 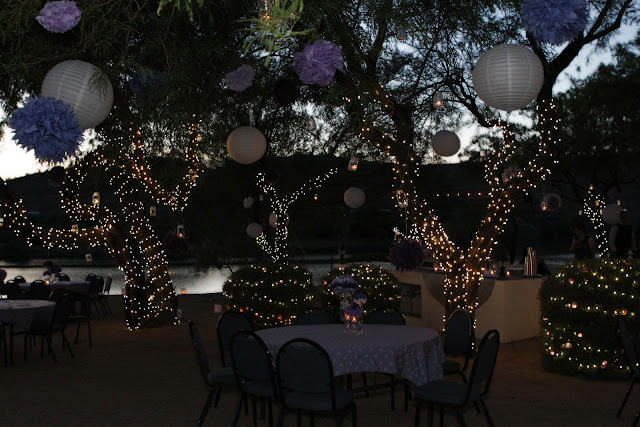 Over to the side, we had a refreshment area.  We had mini-cupcakes and italian sodas for them to enjoy.  We also learned that they like mints at the dances so we ordered mints with our logo on the wrapper.  We did learn throughout the night though, that the kids just do not like to eat at dances so the cupcakes went fairly untouched.  Bummer for that!  The italian sodas were a hit though.  The cute purple straws (that unfortunately got soggy but were so cute)... 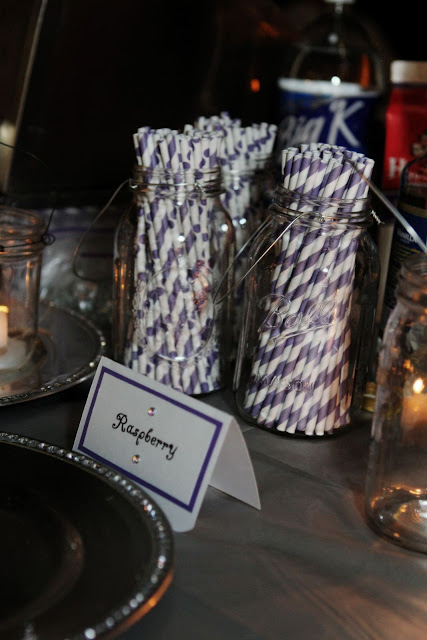 My silver and diamond chargers really added a special touch.  Sister Stover was the italian soda pro.  She had all kinds of flavorings.  To make an italian soda, fill the cup about 3/4 full with "Sonic" type ice, pour in Torini flavorings, add sparkling water, and half and half.  Swirl with a straw.  Yum!
(This picture actually cracks me up because here we touted this dance as a "dry" dance, yet look at all the "liquor" looking bottles!) 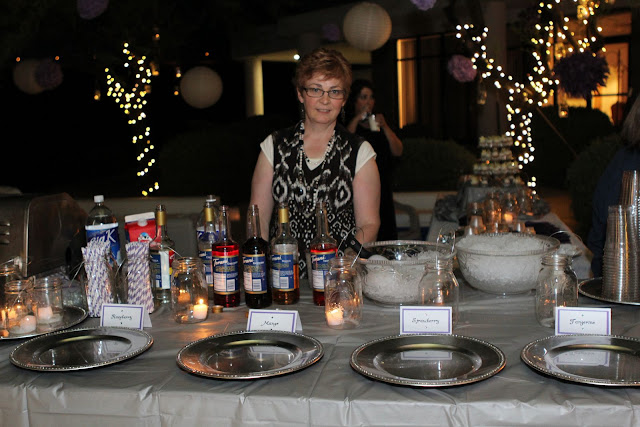 As I watched each group of kids disembark from their vehicles, I was in awe.  Each young lady had on a BEAUTIFUL, yet MODEST dress.  Their hair and makeup were beautiful too, but the glow that was about them because of their spirit was what shone through tonight.  The young men had that as well.  Each couple was just beautiful.  Even the kids who came without dates were beautiful.  My heart was so full as I watched these youth interact with their dates and with their friends.  Here were kids that were truly living the standards they had been taught either throughout their lives or at least for the last few years since joining the young men/young women program at church. 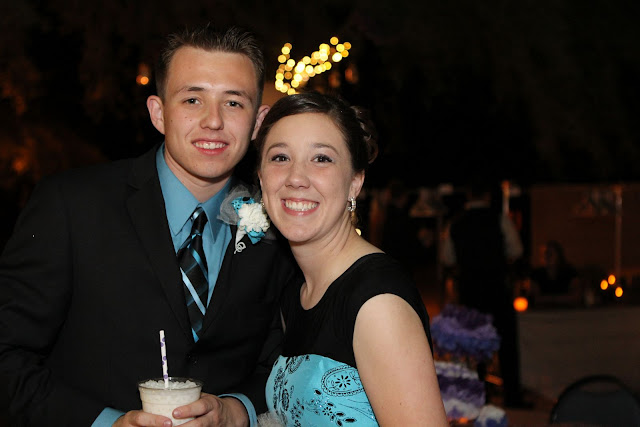 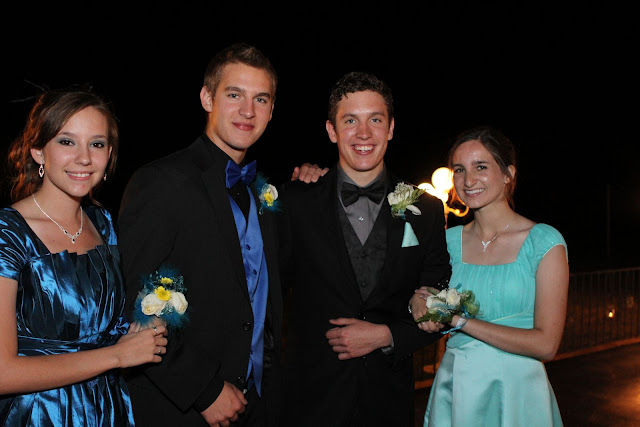 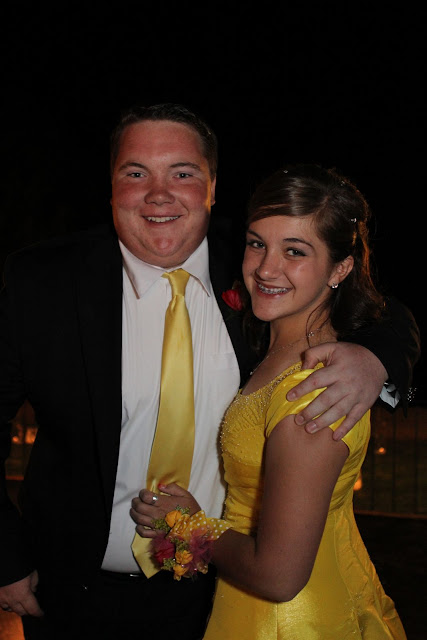 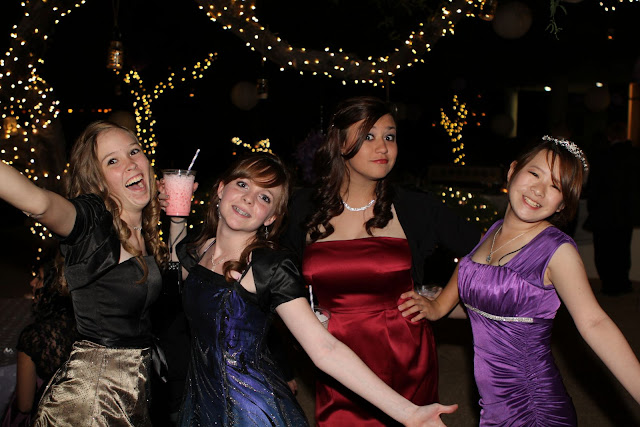 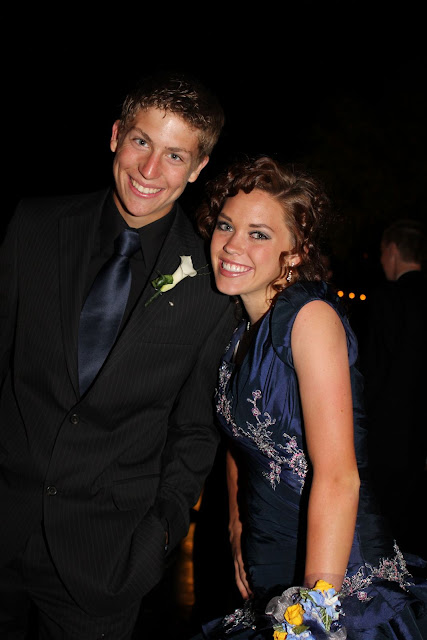 I watched how they danced.  They didn't bear-hug dance like we used to.  They danced appropriately - with space between them so their bodies didn't touch and create additional feelings they would have to deal with...I know those feelings...I was young once upon a time. 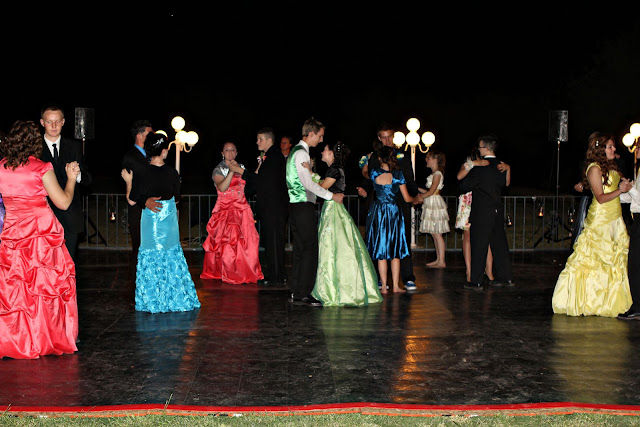 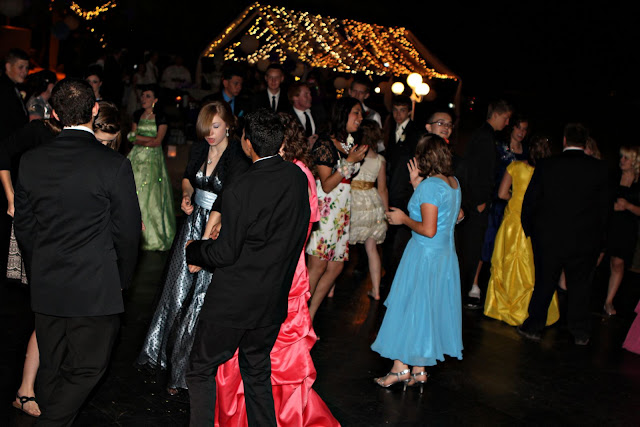 You know, I don't even know most of these kids, but I just want to put their pictures on my blog because I was so overcome with emotion with how "beautiful" they were.  I know I keep going on and on about how they "chose" to come to this prom instead of their high school one at some big mansion, but I am so touched that they gave this prom a chance and decided to come to a prom where they were with kids with their same values, where everyone at the prom would be living the same standards they've chosen to live by.  The expressions on their faces are priceless and I hope they will remember this night forever.  I only went to one prom dance in my whole high school experience - and it was lame.  I wish we would have had this type of opportunity.  Maybe my path in life would have taken a different road than it did.  I don't know...but I wish I'd had the "choice." 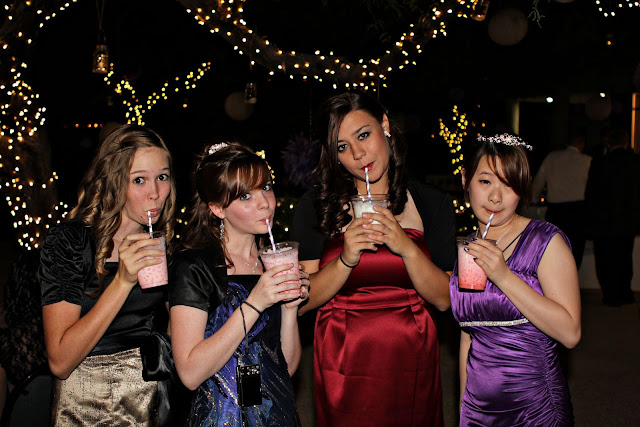 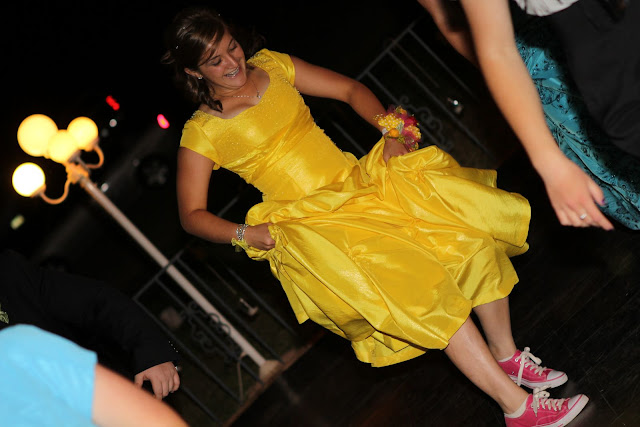 Love the pink tennis shoes.  I would do that too...dancing for 3 hours in heels is a killer!  Who wants to have to deal with sore feet at the end of the night?  Smart girl!
(There were a number of girls who did this...and then others that just took their shoes off altogether.  It was part of the rules that they not remove their shoes, but I think we all just overlooked it because they were all having so much fun) 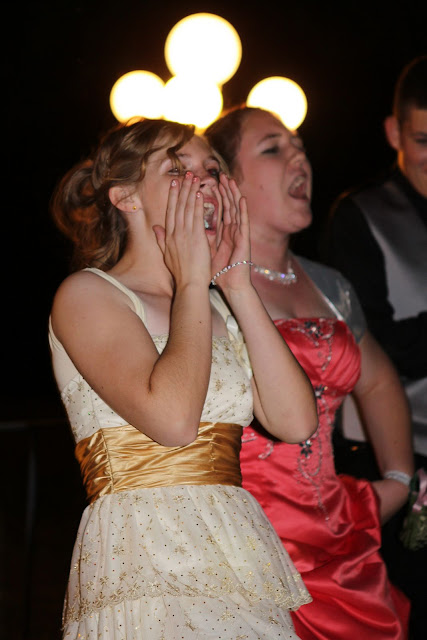 Becky Alldredge and Haley Craig from our ward 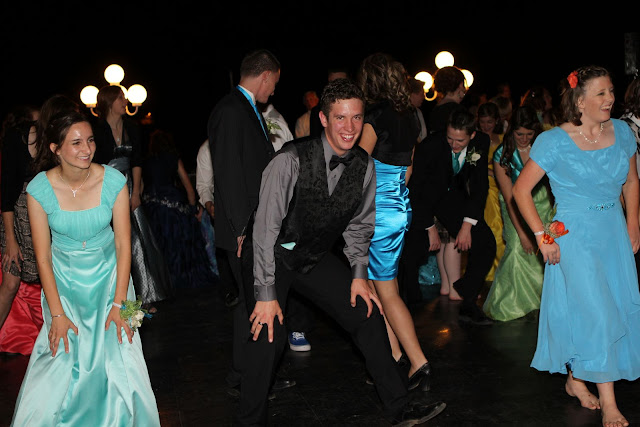 I ended up finally leaving around 9:45 because I still was not feeling well from yesterday and I still had my migraine.  But I love the rest of these pictures that Melanie Wellman took... 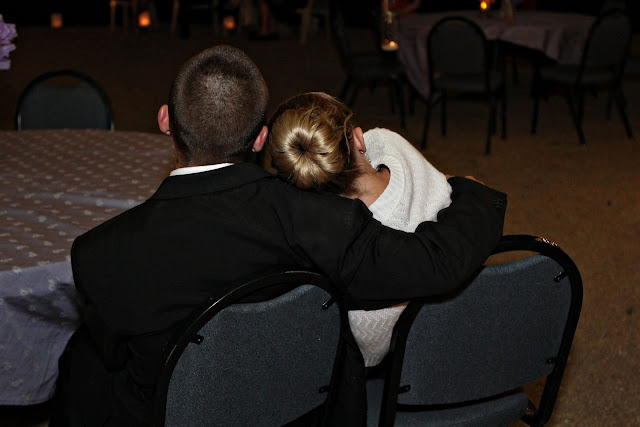 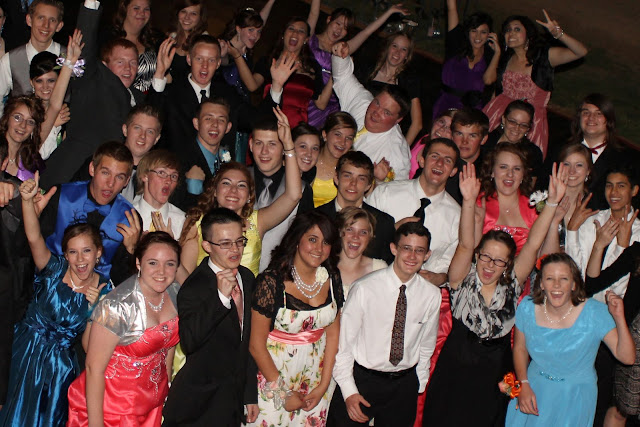 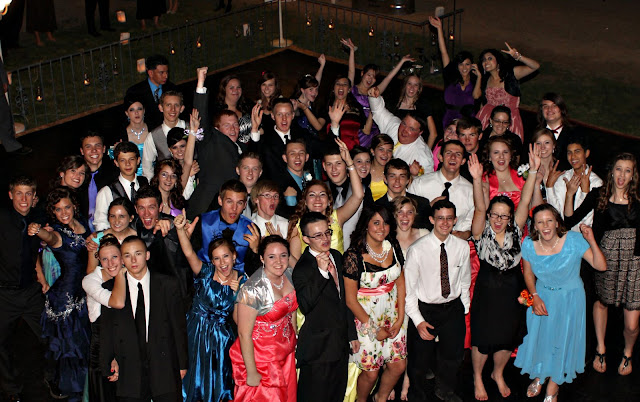 What a wonderful evening!
And...just a few pictures of the committee... 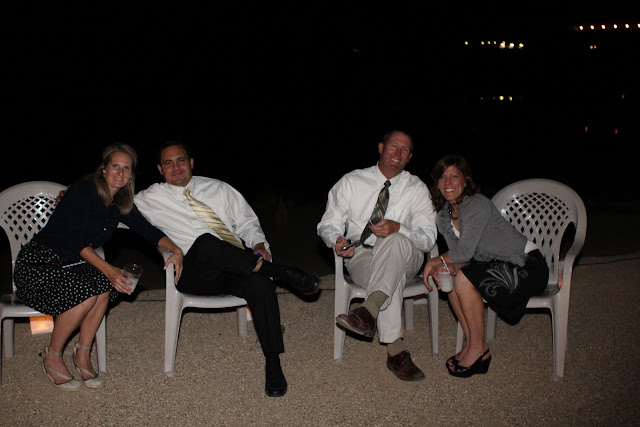 Sasha and Aaron Wayas with Annette Roberts and her husband 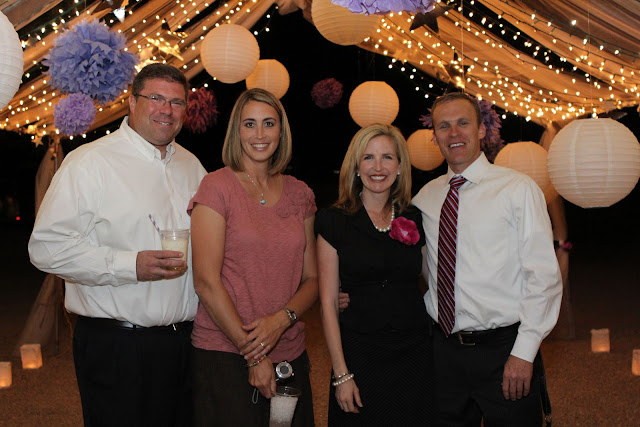 Bishop and Ann Bradford with President and Marie Rolfe 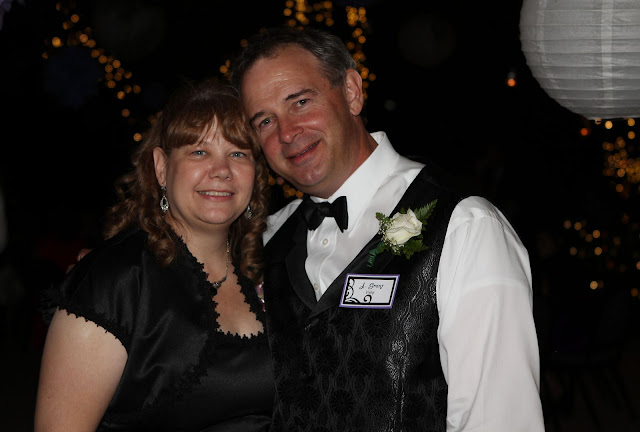 Kelly G and her husband 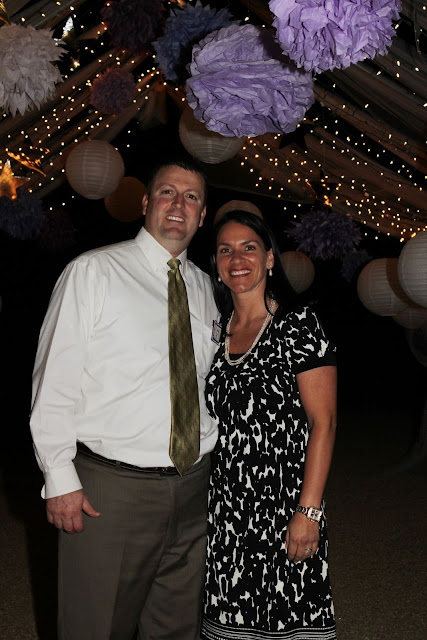 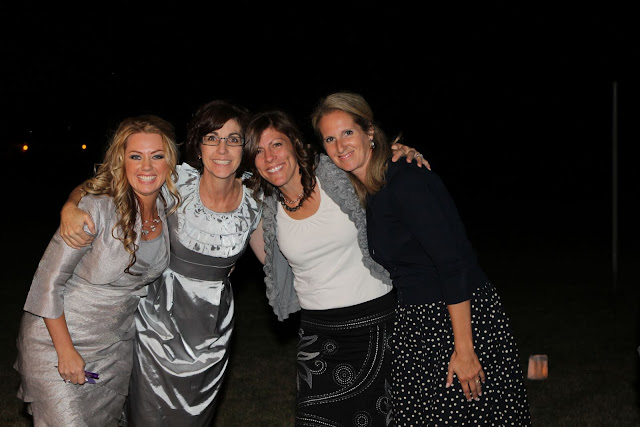 Not sure who the lady on the far left is, but then there's Valarie Shumway, Annette Roberts, and Sasha Wayas

Wow. Beautiful. Nice job to you and all the committee.

That looks awesome. Looks like a fun night...you guys did a great job!