It's T minus one and counting....Prom is tomorrow!  I can't believe it!  It seems like it's taken forever to come and I just hope that what we've done will be pleasing to the Lord and that the kids will like it.

I was at work until 1:30 a.m. this morning trying to get a lot of stuff done since I was going to be off today and would miss out on that work time.  I got home around 2:30 (I hadn't had anything to eat since about noon so I stopped at a 24 hour quick food place and grabbed a bite to eat while driving home).  Then, I went to bed after sending a few emails - it was 4 a.m.

My alarm started going off around 7 a.m.  I was supposed to be out at the prom site by 9, but I just couldn't do it.  I was exhausted.  I finally got up and was out the door though by 9:30.  I called Valarie to see if she needed anything and she needed plywood - 20 sheets of it.  So, I stopped by Lowes and got it.  I may be fat, but I'm not stupid.  I turned on the "I'm a girl, can you help me?" charm and was able to get the guy to not only load it onto the cart, but also into my truck (which they would have done anyway likely), and also to strap it down for me - which they're not supposed to.  Soon I was on my way.

This prom is going to be amazing...at least from my perspective.  I see the love and effort that these people on the committee have gone to to try and make it as lovely as possible with almost no money.  Ticket sales haven't been great because the big high school out here where most of our two stakes' kids go to school is having their prom the same night.  We called them 2-3 weeks before finally making our decision on a date to try to find out when their prom was so there wouldn't be a conflict, but they didn't return our calls until 2 weeks after we finally made a decision.  Lame-o-la.

It's great to see most of the parents being so supportive of the plan and many have thanked the committee for doing this for the kids - including one who doesn't even have kids near old enough yet to attend:

"...although I do not have any YM or YM-aged children yet, I am so impressed with this upcoming activity. I can only hope and pray that when my boys become YM age, that they would have something like this available to them.   I applaud the YM and YW ward and stake leaders in both stakes!  These kinds of activities where church and "For the Strength of Youth" standards are highly encouraged and even enforced are so refreshing to see! Letting our youth know that you can still have a lot of fun and standards at the same time is so important. I always had some wonderful YM and YW to look up to when I was growing up, and now as a parent I can so appreciate knowing the love our leaders have in helping the youth of the church be even better role models for other youth growing up in the stake!"

Things haven't been all peaches and roses though with the parents.  Other parents have been upset that we didn't have it on another date so we wouldn't make the kids choose between this event and their "once-in-a-lifetime senior prom."  Funny...I thought that's what this is...a "once-in-a-lifetime" senior prom, but one without having to worry about violence, virtue, immodesty, and vulgarity.  It's not just a stake dance.  It's an actual prom - you need a date to go to it.  You're supposed to dress up.  You wear a gorgeous dress.  You go out to a nice dinner.  You rent a tux.  That seems like a prom to me.  I guess that because it's not $150 a couple or at a big mansion, that it's not considered a prom.  Rather than thinking we're forcing the kids to choose which event to attend, what about being the parent who encourages your child to attend the event that's trying to promote what your child is learning and what we believe in rather than encouraging them to attend the other one?  Whatever.  I think it's going to be wonderful - whether there are 20 kids there or 200 kids.

We kept right-on-a-working and the time progressed rather quickly.  I couldn't really tell though...remember, I don't do well in the heat. 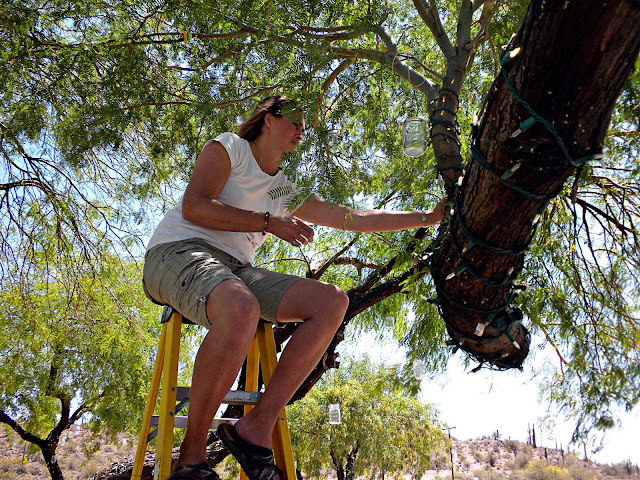 This is Ann Bradford either wrapping the tree with lights or putting a candle / jar up in the tree.  She did a lot of this! 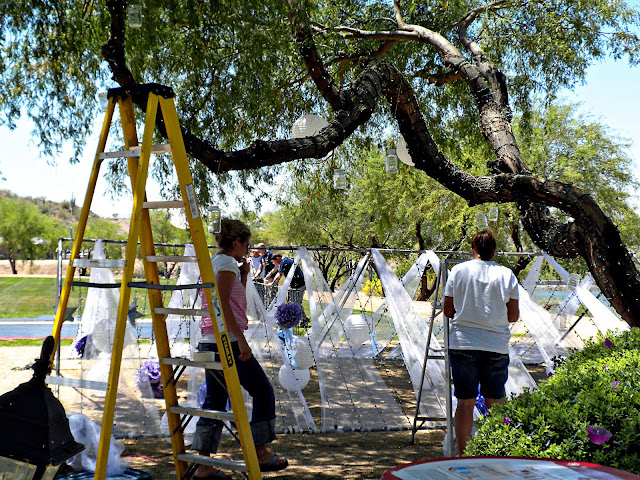 Sasha and Melanie working on the lights and tulle for the canopy.  It truly was a lot easier doing the top piece while it was on the ground! 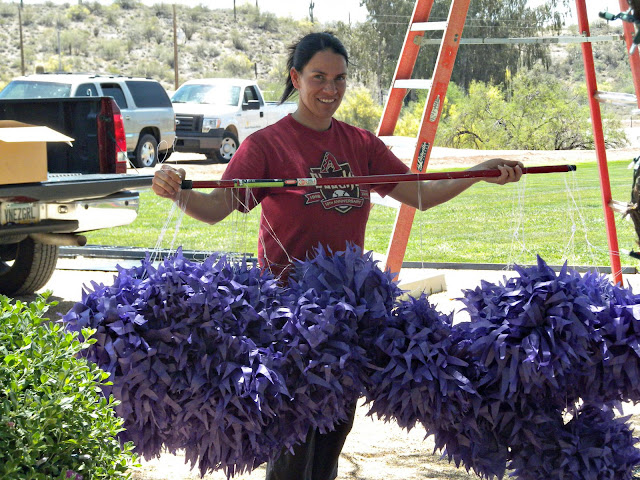 Natasha Bailey carrying a group of huge pom poms.  These were darling and big and oh so easy to make.  We had these in all different sizes and pom pom "leaves" and colors.  They were gorgeous (although these particular ones did remind me of a character from a Dr. Seuss book)!

I helped get the entrance canopy ready and did a few other things and soon I was dying - literally. The sun was truly sucking the life out of me. I was guzzling water like crazy but it wasn't helping. I ended up going and sitting in my truck with it running the A/C full blast. I was on the verge of blacking out when I decided I'd better go home. I think the consensus was that we were pretty much done so two other vehicles followed me off the property. And I was glad they did. I'd been out in 97* heat for almost 4 hours and just was not feeling well at all.

As I was driving, I suddenly lost the hearing in my right ear.  I thought it was weird.  But just as quickly as I realized my hearing was gone, I soon realized that I had super bad vertigo and felt like I was flying - especially just as I crested over a small hill.  I couldn't tell if I was in the air or still on the road.  It literally freaked me out and I seriously thought I was going to crash and die.  Quickly enough I realized that I was still on the road but that I needed to pull over because not only was my vertical plane messed up, but so was my horizontal one and I couldn't tell exactly where I was on the road either.  I could have been in the oncoming traffic lane for all I knew.  I actually almost ended up hitting the guardrail as I pulled over.  My truck was angled with its backend sticking out into the lane of traffic and I was freaking out at what had just happened.  I was scared beyond belief!  I was sitting there with my head in my hands trying to get it to come back to normal when I noticed that one of the cars from behind me at the prom site had circled back and come to see if I was okay.  I was so glad.  It was Natasha Bailey.  I really wasn't okay, but I told her I'd pull up and get off the road and I was sure things would improve in just a minute.  She was willing to drive me home and have her friend who was with her drive her car, but I insisted I would be fine soon.  I sat there for what seemed about 10 minutes but was probably only another minute or two and suddenly another familiar car passed me, circled back around, and came to see if I was okay.  It was Sasha Wayas.  I assured her I was okay, but she agreed to follow me for a ways.  I called Lisa and talked to her on my way home, continually telling her where I was so in case something happened, she could find me.  Apparently, yes, I had heat stroke.

So, I finally made it home and into the house.  I was going to go take a cool shower but I just didn't have the energy so I decided to go into the office and work on the ward bulletin for Sunday since I knew I wouldn't have much time tomorrow or at all after the prom at 1 a.m.  But, that didn't last long as the heat stroke ended up causing a migraine that then sent me to bed around 3:30 p.m.  I was shaking while laying there and I was super cold.  The room was just not dark enough either so I ended up laying there in pain until about 4:30 or 5:00 when I finally fell asleep.

I ended up getting up at 8 p.m. and still had the migraine but it was tolerable enough to work on the bulletin, so I did.  Since it is going to be Mother's Day on Sunday, it took longer because I wanted to make it special.  Um, yeah, it was like 2 a.m. when I went to bed.  Not good.