On Our Way Home

We left this morning around 10 a.m. to head home.  We had decided to go through Vegas and spend the night there.  I just wasn't feeling well at all and didn't think I could handle the whole ride home.  We'd found a good deal on a beautiful room at The Venetian so I was looking forward to some rest there.
We jumped on I-15 and started on our way.  It wasn't very long before the heavens opened up and it started pouring down tons of rain.

The clouds were hanging really low.  It was neat to look at them...inbetween sleeping to try to feel better.  I guess everything had just caught up with me.  I was really sick. 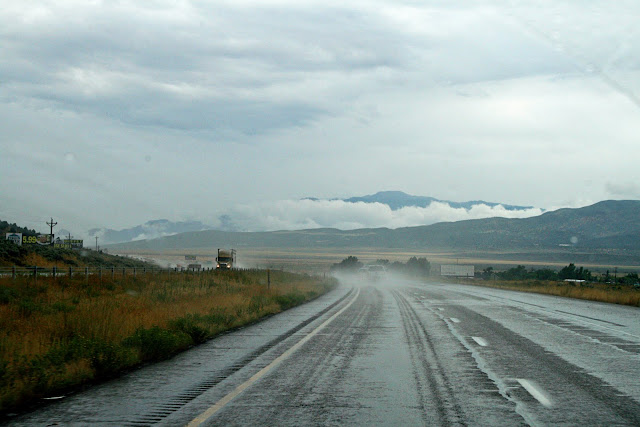 Knowing how much I love to take pictures of the state line signs, Melon Man woke me up to take this picture as we crossed into Nevada.

By this time, I was finally awake.  I still felt like garbage, but we were almost to our destination, so I stayed awake.

I thought this sign was so ironic...in a city where it seems Jesus could never be found, someone has tried to get people to remember him.  Good for them!

Pretty soon, we were exiting the freeway and heading right to our hotel...The Venetian.

As we were sitting at a light waiting to turn to go to our hotel, we saw one of the mobile signs promoting Vegas sin.  So many people think pornography and blatant sex are okay...to me, it's just not.  This is part of why I don't care for Vegas. 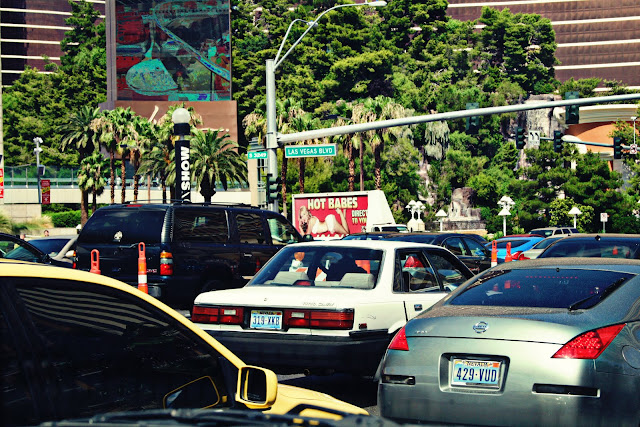 The valet area was phenomenal.  It was a well machined hub of activity.  The ceilings gorgeous.

When we walked into the lobby to check in, there was a man there playing his accordian and singing.  It felt like Italy.  I loved it.  The grand hall was so beautiful.  The line moved pretty quickly and soon we were on our way to our room.  I really wanted a view of the strip because it's so pretty at night, but I wasn't willing to pay another $45 for a view that I might not even see if I fell asleep early, so we just took a regular room with a view of the eastern mountains.

I wanted to stop and take a bunch of pictures of the grandeur of the hotel, but I was still really feeling awful, so I didn't.  I really hoped that it wasn't a long walk to the elevators to get to our room because I couldn't breathe very well, but...it was.  I barely made it.  It was like I had pneumonia or something.

We lounged for a little bit and then we left and went to The Rio's Carnival Buffet.  We'd seen it on some show on tv and they'd talked about how it was the best and biggest buffet in Vegas.  Well...it was pretty big.  But, it wasn't the best.  They put us over in the far, far, far corner, next to....the salad bar.  Who wants to eat salad at the biggest buffet place in town?  Not me!  I'd forgotten that this place was known for the all you can eat shrimp and crab legs.  I didn't realize they had them until I saw somebody else come back with them.  Then...I went in search of the shrimp.  And...I found it...my dad would have been in heaven...

We finished up and headed back to our hotel.  Melon Man went "shopping" and I went up to our room.  I had a special something planned for him.  It was going to a special night....if I felt up to it...

He came back with a present from Brighton for me.  The rest of the evening was very nice, romantic, and relaxing.  I wish I'd taken pictures of the room, but I never did.  I definitely want to stay there again though!

In the morning, we headed for home.  I was quite nervous about the ride home because we were going to have to go across the new bridge they've built near Hoover Dam.  Instead of going over the dam, you just drive over this big bridge instead.  A while back I blogged about it...yeah, I was truly afraid...

I closed my eyes as we went over the bridge.  I didn't open them again until the very end when I could finally take this picture! 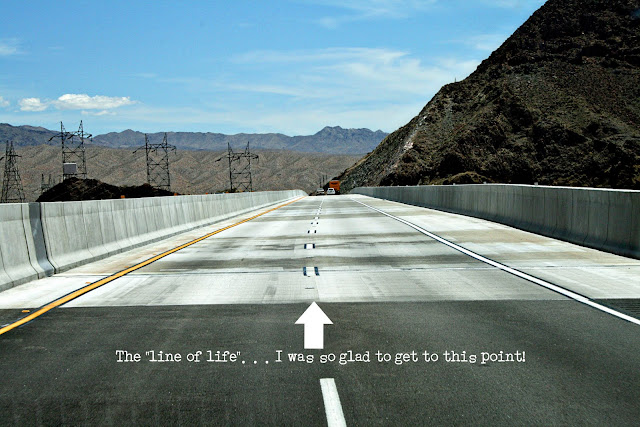 A nice, grounded, road leading back to home. 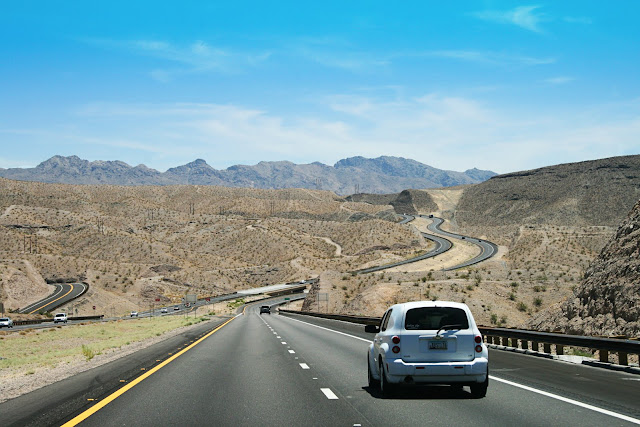 We got home, picked up Dog and Little Dog, and then I went to Young Women's.  I HAD to go - I was teaching a big project that night.  I got home that evening and was glad I had scheduled the next two days off of work...I was feeling really sick again...