It's Red and It's Lovely

Melon Man came home today and let me sleep for "a bit."  When I finally got up not too long after he arrived, we decided to go out to breakfast - just the two of us.  Although we would have loved to invite our breakfast buddies, we needed some one-on-one time since we hadn't had much lately.  Just as we were getting ready to head out the door, I spied what I thought was a gecko on the wall in the backyard.  I didn't think a whole lot about it as it's pretty normal to see them in our yard.  But this one...well, he was kind of different.

I grabbed the fancy pants camera so I could really zoom in on him and oh my!  He was huge!  He let me get a few pictures from inside the house and then he ran away.  I think this is some sort of lizard rather than a regular gecko.  His "skin" was different than a gecko and the coloring was too.  I hope we'll see him 'round these here parts again! 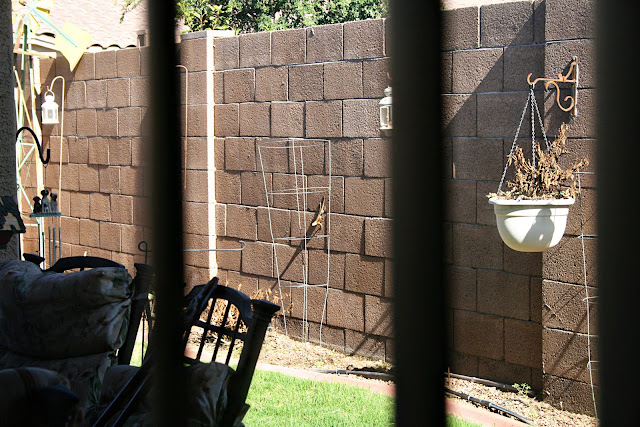 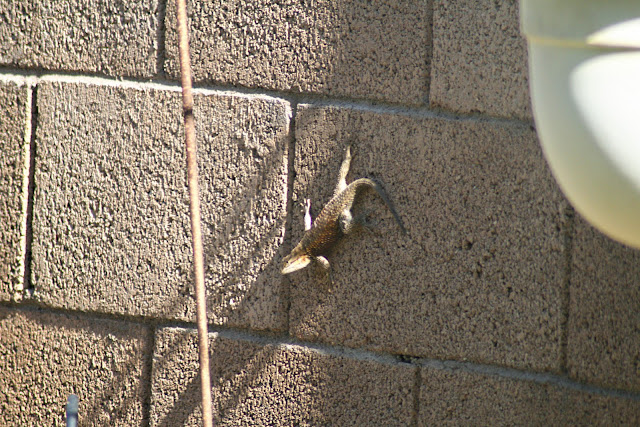 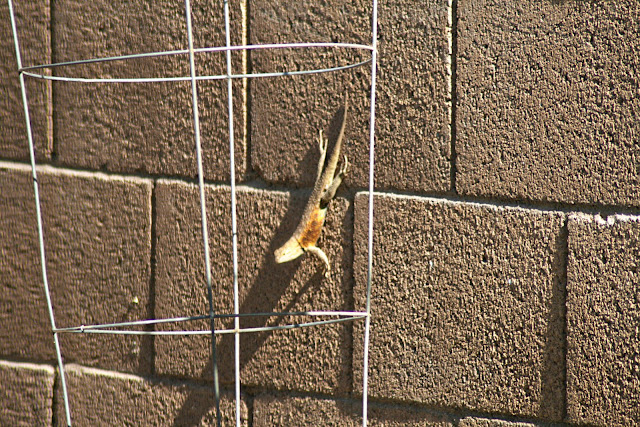 We left and went to The Coral for breakfast.  I had a yummy taco salad I made.  I was just craving it.  Then, we decided to head off to "The Dump" in Tempe.  It's a furniture store.  We have been talking about a new sofa for a while but have never felt like it was a "need," only more of a "want."  Well, I guess we finally had decided it was more of a need since it was practically impossible sometimes to get out of the recliners because they were so old.  I'd had that sofa for 12-13 years at least.  So, I'd looked online at the store's website and had seen this beauty...

It was BIG.  It would be perfect for our living room, along with a chair or two.  It was a color and style that I finally liked.  It appeared to have good support.  I liked it.  I really liked it.  So...off we went.
We walked into the store and I was quite surprised by the place.  It was nice!  With a name like "The Dump," I'd expected it to be kind of dumpy, but it wasn't.  We found a sales guy - well, actually, he found us - don't they always? - and we told him what we were looking for - the big giant sofa.
Why is it that they show stuff on their website that they no longer sell?  I mean, dang, I was totally into that sofa!  But, just as well, I guess...when they did have it, the sale price was $9,000!  Um, no, don't need it that bad!
So, we continued to look around.  I'm so picky.  It has to be a certain color.  It has to have built in pillowing, not individual pillows.  It has to have recliners.  It has to have great support.  It has to be leather or leather-like vinyl.  It has to be nicer than "family room" but not too fancy that we can't lounge in it.  This and that, this and that.  Picky, picky, picky.
Just when I was about to say okay, let's go, I still can't find anything, Melon Man pointed out another red sofa.  Red?  Really?  I mean, let's face it, I LOVE RED.  But, too much of a good thing ruins it.  Right?  And what if it clashes with the wood floors?  Well, not this time.  It was the perfect red.  A sofa and a love seat - with FOUR recliners!  We sat on it, we tested the recliners, we stared at the color, we checked out the price, and then we bought it.  The price we paid was $1,500 less than the regular retail.  I thought that was pretty awesome.  It will arrive next Saturday.  Too bad I was lame-o-la and forgot to take a picture!  Oh well...I'll take one when it's in it's new home!

Cant wait to see a pic. Every red leather sofa I've seen has been an eye catcher and very nice. I've often thought of one for the cabin.