On February 10th, I got a little bit of a strange call from the boss.  He told me that I needed to plan some travel for the end of the month.  I played it as, well, why?  But, down inside, I was screaming at the top of my lungs!  I had been hoping and hoping for this call.  See, yesterday was our "President's Plate" ceremony and I have wanted to be nominated and win for so long.  And...finally I did!  This is a great honor in our company.  You are recognized in front of the top leaders of the company and you receive a crystal, engraved plate with a VERY NICE cash award.

I was nominated two years ago, but I actually won this time!  I was so excited!  The bummer thing though was that I had to keep it a secret until it was awarded.

So, off I went to cold Chicago this week - a quickie trip - and that's good because I'm super busy - but it's for something extremely good!

I took a couple of pictures of the stage where the awards were presented, but then I realized that I was taking pictures of where I work and I don't like to post that info on my blog so I'll have to remember to insert them when I put this year's blog into a book.  I can't post a picture of the award either because it has my company name and my name engraved in the crystal.  Oh well...I'm sure people will see it when they come to my house sometime.  I've put it in my home office/scrapbook room right next to my Pinnacle of Excellence award I won a few years back.

Our team, along with a few other individuals who assisted on the project I work on on a daily basis, actually won the award.  It felt so good to walk across that stage and finally be recognized for all the hard work we do, all the long hours many of us work, and the progress we have made.

The ceremony ended with a reception and then we met up with others for more appetizers and beverages of choice.  We ended up having dinner there rather than somewhere else since we were already there and it was getting late.  We finally headed back to our hotel and I ended up falling asleep in the chair at the desk because I was so tired.  I woke up and it was almost midnight so I hurried and packed my suitcase, taking special care to pack my award carefully, and then headed off to bed.

Yesterday was also sort of a scary day.  Just south of Chicago - well, 350 miles directly south - there was an EF4 tornado in Harrisburg, IL.  I realize that that is a long way away from Chicago, but still, it was a little unsettling that it was so close to me.  The town is essentially obliterated, gone.  People died.  I'm grateful that I don't live in tornado alley.  I don't think I could handle the stress, uncertainty, damage, and death that comes along with living there.  Imagine this....one minute there are houses there, the next, nothing but a big mess. 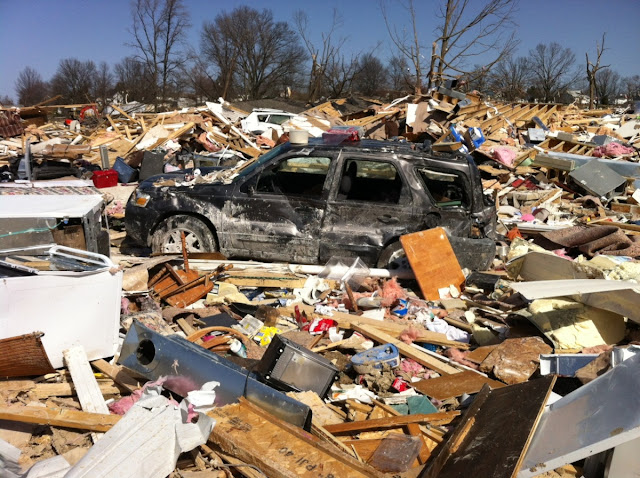 My co-worker and I flew home this morning and Melon Man came and picked me up at the airport.  On our way home, we stopped for lunch at Firebirds.  It was so good.  It's the kind of dinner we were planning on last night, so it hit the spot.  Then, we came home, he went to bed again since he has to work tonight, and I went and worked some more on the Scrapboffice.  I felt like I was in slow motion as I worked.  I was so tired that I finally just grabbed some pillows that were in the room and put them on the floor and laid down!  It was cold though from the ceiling fan, the window being open, and me now wearing any pants - oh, and the floor being rock hard - so I didn't really sleep.  And...the dog was acting weird.  He kept staring out the window and grunting every so often.

Finally, I just got up and went to the living room.  The dog continued to grunt out the front door.  Soon, the phone rang.  I was too tired to get up to get it so I just let it go to voicemail, but the person on the other end didn't leave a message.  About 10 minutes later, one of my young women showed up at my door.  She was in need of help in making a sign to answer her Prom date back.  So, she and I worked on that for about 2 hours.  It was nice to just visit with her and help her.  I was happy that she thought of me and asked for my help.  It feels like I'm finally starting to make a connection with some of my girls.

Now I'm going to go watch TV for a bit and then go to bed.  I'm exhausted.  Oh...and we discovered why the dog was so nervous...the big garage door had been left open all day since we'd gotten home.  As soon as we discovered that and put it down, he laid right down and relaxed.  Weird, isn't it, how they just 'know' something is wrong?