How and Where Does Your Garden Grow?

A few weeks ago, Melon Man told me he wanted to plant a garden this year.  Great, I thought with a slight growl in my mind.  He tried this a couple years ago and nothing grew.  The soil here is crappy.  It's so hard, it doesn't have any nutrients, it's rocky, etc.  But, part of the reason nothing grew last time was because either the dogs ate all the fledgling plants or the gardener boy thought they were weeds and pulled them up since we hadn't told him about them and where they were planted didn't really "look" like a garden.  Who knows...no biggie.

Well, this time, Melon Man said he had a plan to make it appear more like a garden and a way to keep out the dogs.  Okay, go ahead - but please make sure it's well watered and on the drip system so you don't have to worry about it.

Well, off he went to Home Depot or Lowes and he came home with tubs, dirt, plants, wood, etc.  He did his thing for a couple of days and lo and behold, he had a little "desert" garden planted.  See, we have no space to grow a garden like this...like what my dad used to do when I was growing up... 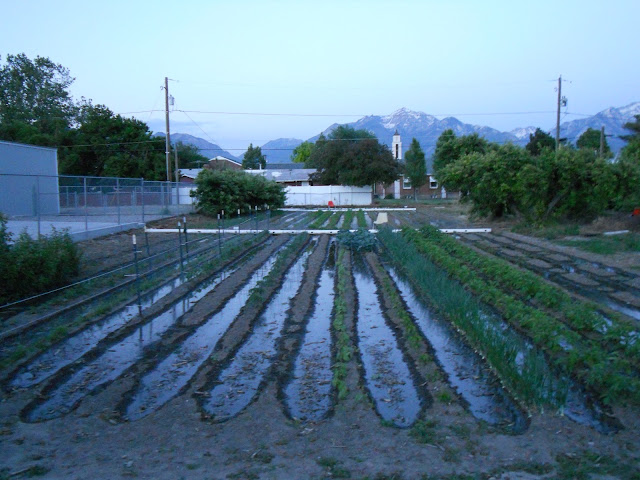 Nor do we have this much room... 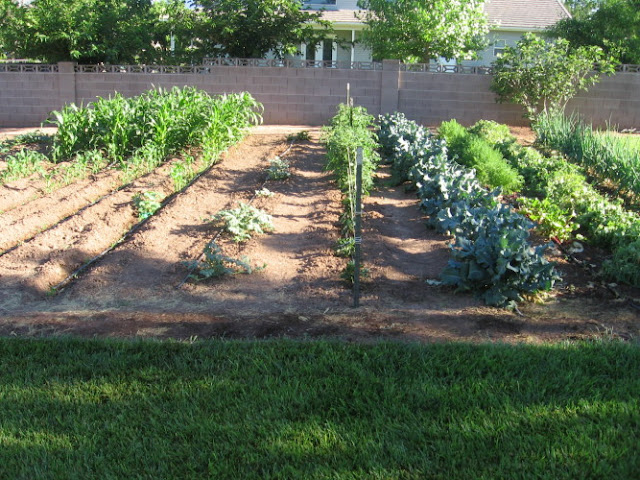 Nor do we even have this much room for a raised bed garden! 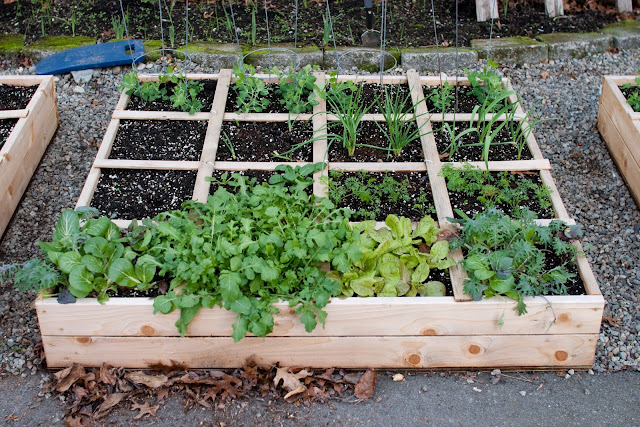 So, he did the best he could in what little space we have and this is what our little garden looks like: 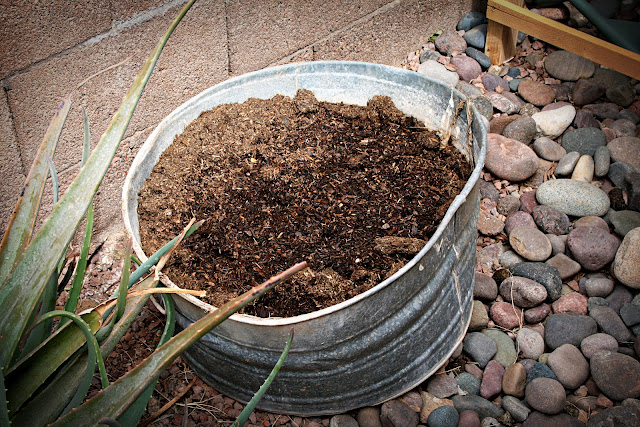 We have an old metal washtub that sits on a pile of rocks, filled with dirt and seeds for green beans. 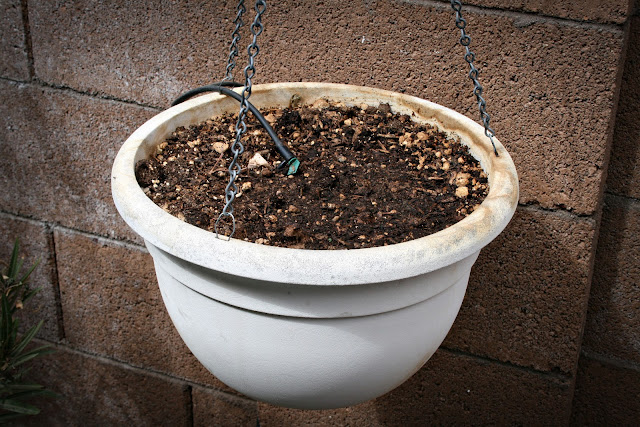 We have two hanging pots with seeds for spinach in them.  This one has nothing sprouting yet.  The other one has two little sprouts in it - but we're unsure if they are actual plants or weed seedlings coming up.  Only time will tell. 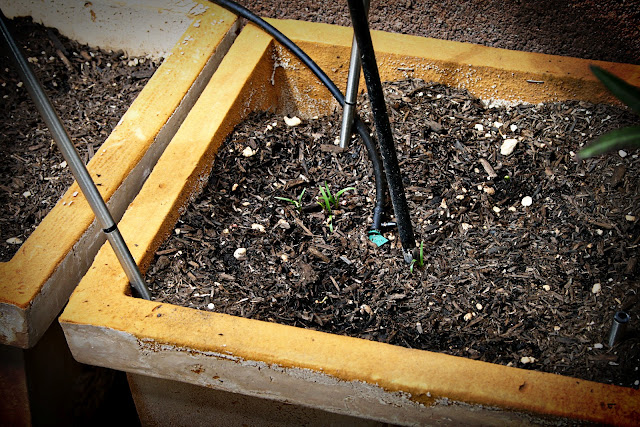 These two square containers used to contain petunias and such, back when I had the time, energy, and desire to get outside and plant.  Now, they are also sprouting spinach in them. 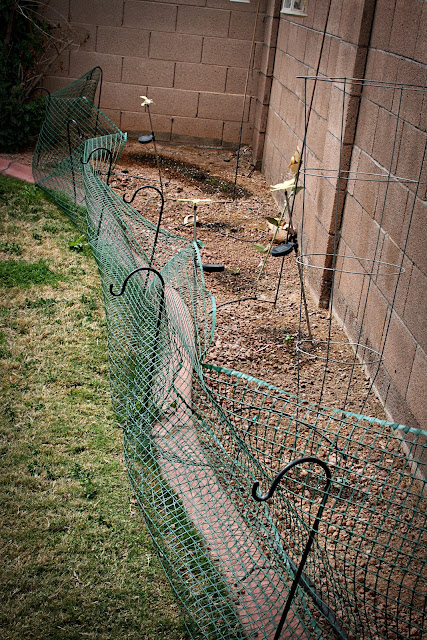 This is half of our little garden area.  It's only about 12 to 18 inches wide.  He planted watermelons, cucumbers, peas, and sunflowers here.  The ground is so hard that he only dug holes right where the base of the plants would be.  Our lovely little fence apparently needs to be fixed...the dog on the other side of the wall was barking like crazy while I was out there taking these pictures and Dog tried stomping down the fence to get to him! 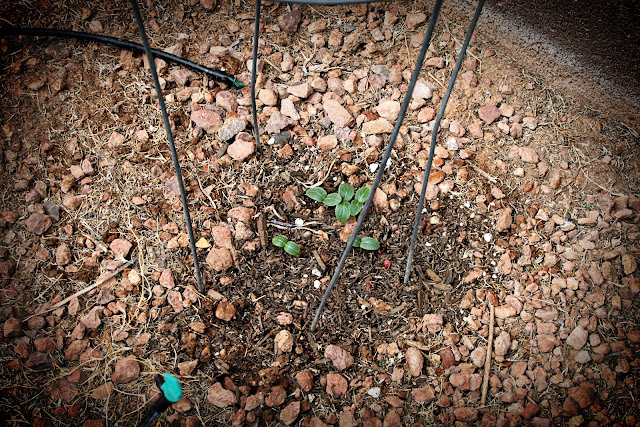 Amazingly, some of the plants are already starting to come up!  It's been so warm this week that with the water they've been given, they've germinated really fast. 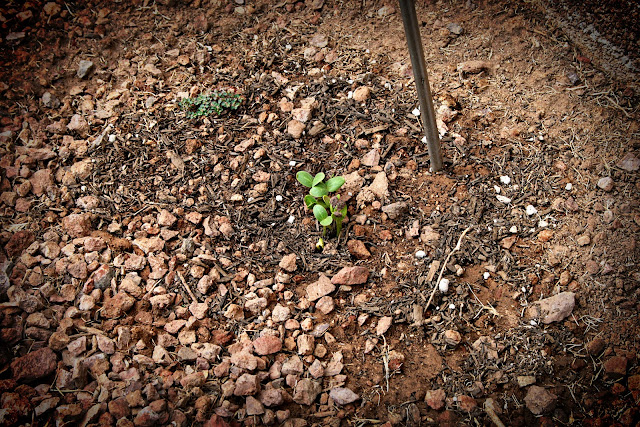 It's supposed to rain this evening and all day tomorrow, so that will hopefully give everything a really good drink! 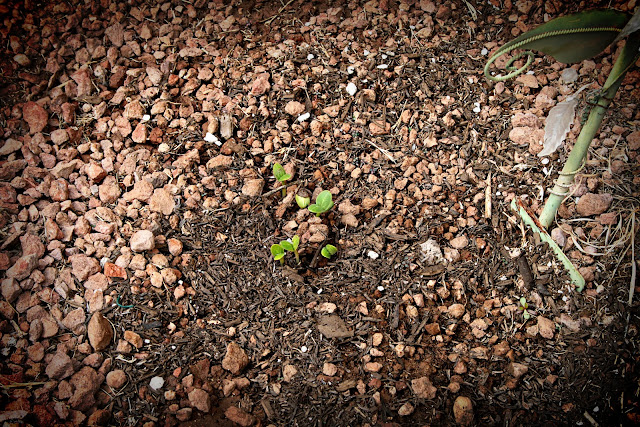 This picture below is from over in the corner.  The seedlings are coming up quite well here already.  Look at that group in the center.  I so badly wanted to reach over and help out them out by lifting that mound of dirt off of them, but then I remembered the story about the emperor moth that I shared in my Young Women lesson last week and how they have to do it on their own or it weakens them. 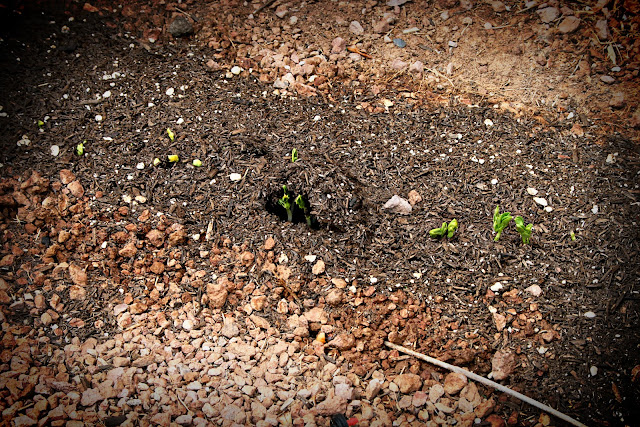 This is the emperor moth story:

A man found a cocoon of an emperor moth. He took it home so he could watch the moth come out of the cocoon. One day a small opening appeared, he sat and watched the moth for several hours as the moth struggled to force the body through that little hole.  Then it seemed to stop making any progress. It appeared as if it had gotten as far as it could and it could go no farther. It just seemed to be stuck. Then the man, in his kindness, decided to help the moth, so he took a pair of scissors and snipped off the remaining bit of the cocoon. The moth then emerged easily.  But it had a swollen body and small, shriveled wings. The man continued to watch the moth because he expected that, at any moment, the wings would enlarge and expand to be able to support the body, which would contract in time. Neither happened! In fact, the little moth spent the rest of its life crawling around with a swollen body and shriveled wings. It never was able to fly.  What the man in his kindness and haste did not understand was that the restricting cocoon and the struggle required for the moth to get through the tiny opening was the way of forcing fluid from the body of the moth into its wings so that it would be ready for flight once it achieved its freedom from the cocoon. Freedom and flight would only come after the struggle. By depriving the moth of a struggle, he deprived the moth of health.  Sometimes struggles are exactly what we need in our life. If we were to go through our life without any obstacles, we would be crippled.
These are the bins that Melon Man used for our little garden and they are sitting about 3 feet off the ground on a table he built.  This will keep the dogs and any possible bunnies that we may get in our yard out of them.  They are also really nice that they are so high so we don't have to bend over to tend to them!  They are in an area where they get some nice mid-day sun but also will have some cool shade later in the day when the sun shifts to the south some.  In these tubs are planted broccoli, zucchini, jalapeno, green onions, and tomatoes. 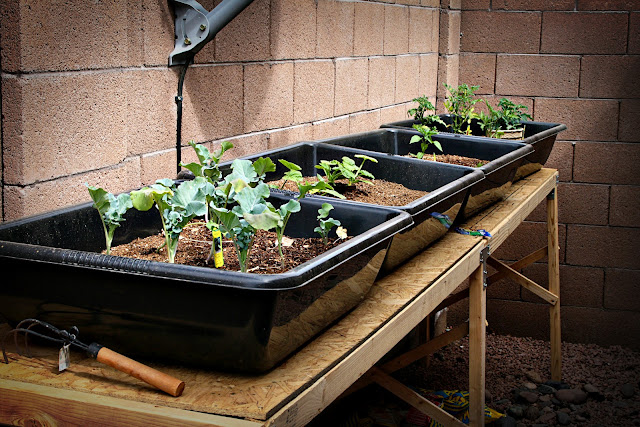 And this is our little tangelo tree.  It's got its first buds on it and so I'm hoping that we will finally get some fruit off of it this year and that it will grow really big finally! 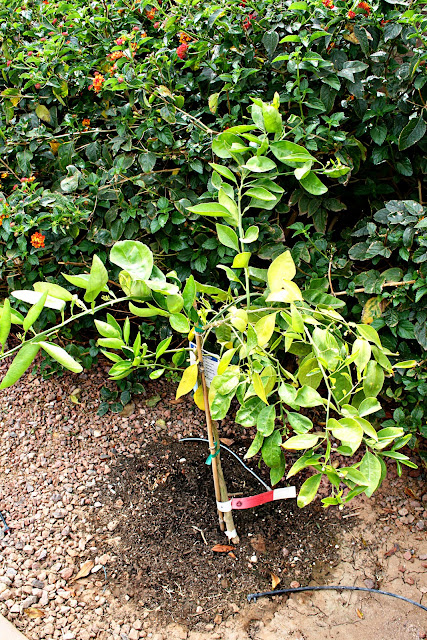 We have a pot out front by the front door that has rosemary, cilantro, and what Melon Man thought was basil, in it.  I looked at it this morning and let him know that definitely is not basil - but rather, it looks like it's likely a tomato plant!  There are little flowers on it and it has just taken off!  Maybe the basil is out in the tomato bin!
Well, that's our little garden.  I'm proud of my Melon Man for planting it all and taking care of it.  I hope it produces a good amount for us before it gets too hot.  I'll take more pictures as things grow and are harvested.
One last picture for the day...
When my young women were here the other night, we made replacement dough for the bread dough we used for the class since Melon Man always says, "Where's mine?!?" when he gets up and they've made bread.  I hadn't had a chance at all to bake it yet, so this morning I plopped it into the oven right as I walked out to go get Holly.  I didn't realize until 40+ minutes later as I was coming home from getting her, some breakfast, and Melon Man's medicine from the pharmacy, that I'd forgotten to set the timer.  I also didn't realize I'd be gone 40+ minutes either!  I was fretting that the bread would be burned and ruined.  But....it was PERFECT.  I'd made one batch of dough that makes 4 pounds of dough, but I'd made one BIG loaf from it.  I had to put it on the pizza paddle diagonally just to make it fit and that is a BIG pizza paddle!  It almost didn't fit on the pizza stone in the oven!  So, the extra baking time, along with a 25 degree reduction on the temperature was just perfect.  I got it out just in time and it is BEAUTIFUL!

Never in my life did I ever think I would be able to bake such delicious and perfect bread.  Thank you, thank you, Jeff Hertzberg and Zoe Francois for your perfect, quick, artisan bread recipe! 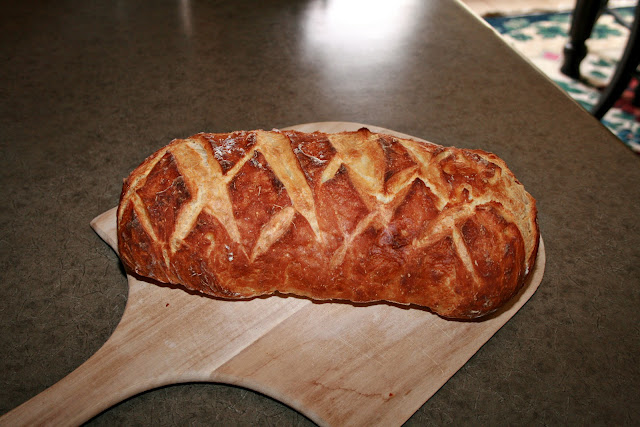 Love your garden! We have crummy soil here too. It's taken years and lots of amending but we are finally in a better place. I would love to try composting! Every time I throw away organic scraps I think about good rich soil. One day maybe.