A number of years ago, I bought a "Silhouette" cutting machine.  Loved it.  WAY better than a Cricut.  Used it a LOT.  Then, I kind of got away from using it once I got "into" vinyl and bought an actual vinyl cutting machine that could do stuff up to 24" wide.  Well, during all this time, two new versions of the Silhouette have come out and I've thought about buying one, but since I had the other one, I just couldn't bring myself to shell out the bucks for the new one.  On one hand, I'd tell myself the one I had was just fine.  Then, I'd see stuff that people were doing with the new version and I'd realize I couldn't do that with my version so then I'd want the new one again.  At Christmastime, they had a REALLY good deal on them.  I thought about getting one then.  Decided against it.  Then, a few weeks ago, they had a good deal again.  Decided against it.  Well, then right after my birthday, what happens?  Another fabulous offer.  So this time, I went ahead and ordered it.  And, it arrived today!

I can't wait to finish getting the Scrapboffice put together and the computer moved in there so I can put it in it's new home and start using it! 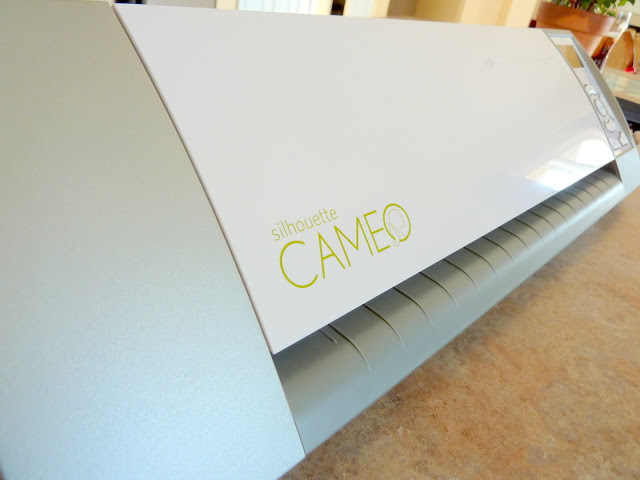 So, what does a Silhouette Cameo do?  I think the question should actually be....what doesn't it do?!?!

The Silhouette Cameo is an electronic cutting tool that connects to your computer allowing you to cut fonts and images in cardstock, vinyl, heat transfer material, etc.

My cousin Cindy would probably love one for cutting quilting designs.  It can cut fabric.  It can cut templates for rhinestones that you see on shirts and such.  It can cut vinyl - which will be a great help for me!  Yes, I have a huge vinyl cutter, but sometimes I end up with good size smaller pieces of vinyl that end up going to waste because I can't use them on the big cutter.  Now, I'll be able to use them on the small one!

Anyhow, I just had to post about how happy it made me that it arrived today.  I'd kind of had a bummer day today.  It's Melon Man's birthday (HAPPY 55TH BIRTHDAY HONEY!) and I didn't really get to spend any time with him this morning because I had to rush off to work so I could get in early so I could leave early to go to my laser appointment and then to Mutual.  This afternoon at work, I got kind of irritated with a few things that were happening.  I was just in the mood to say 'do whatever you want, you're not listening to me anyway', but I didn't.  Finally it was time to leave to go to my laser appointment but I was still irritable.

When I got to the laser place, nobody was there, but the office was completely open and unattended.  I was about 5 minutes early so I figured the technician was with a client.  I waited and waited thinking they would come out soon, but they didn't.  After waiting 10 minutes, I started to get concerned that maybe she'd had a medical issue or something.  I was calling back to her, helllllloooooo?  Anyone here?  Hellllllloooooo?  Nothing.  Finally, I called the 800 number for the company - thank goodness for smartphones with web access - and told them what was happening.  They became concerned too because the schedule showed that the tech had many more appointments still.  I told the gal on the phone to stay with me - I was goin' in.  So, I opened the door between the waiting room and the office part and started wandering through the office.  I found one of the laser room doors closed and knocked.  Nothing.  I couldn't hear anything inside like the beeps that the machine makes or the fan on the machine.  I was a little nervous to try the door.  But then, I heard some voices down the hall and so I went down that way.  Sure enough, the tech was in there with a client, so I went back to the waiting room and told the girl on the phone that things seemed okay.

Finally, after waiting for 35 minutes, they came out.  They were all, "oh, sorry, we were chatting, looking at pictures, etc."  I was like, uh, well, I've been waiting.  I probably did not have a very nice look on my face.  I was P.O.ed!  When we got back to the room, she "sort of" apologized.  I told her that it was completely inappropriate to keep someone waiting that long while she "chats".  I told her I was now late for an appointment I had after the treatment.  I was ticked.  I let her do the treatment and then I left.

I was supposed to go to Mutual, but I found out it was cancelled, so I thought about going back to work, but then decided I wanted to come home and be with Melon Man before he left for work.  I stopped off at Der Wienerschnitzel and got a couple chili dogs for dinner.  Yum.  Then, waited for Melon Man to wake up.  He's in the shower now and I'm going to work on Dad's taxes after he leaves for work.