On the Road Again

Yes, I'm on the road again. But this time it's for rest and relaxation. Farmer Man and I planned a trip to San Diego about two months ago when I was feeling super stressed and needing a getaway. Yes, he needs one too, but at the time, I was about to ready to check out just to get some rest. So, at that time we booked our favorite - a corner suite at our favorite hotel - the Hyatt Mission Bay.

It seemed like it took forever for the day to arrive, but it finally did today. I was up super late last night getting things ready to go and I ended up only getting about 2.5 hours of sleep before it was time to get up and get going. I packed up the car, loaded the dog in after a huge crying fit because I was overtired, sweating to death, hair getting all sweaty and gross, and him yanking me all over the place because he was super excited to go, and then we were on our way to pick up Farmer Man from work. As we drove out of the neighborhood, I realized that I didn't remember if I had put the garage door down or not so I ended up having to turn around and go back home to check it...and cried some more because I knew Farmer Man would be ticked that I was now even later coming to get him.

I got about 1/2 way to his work and of course, the phone rings and it's him.  I think he could tell things just were not right and he just let it be.  I arrived at his work about 10 minutes later and he threw the water he'd bought into the back of the car, jumped in, and we were off to the Petshotel to drop off Dog.  I was still so upset with Dog that I was a mean mom and didn't even say goodbye.  I made Farmer Man take him in by himself and I moved to the passenger seat in the car.  A few minutes later, we were on our way.  We got onto the 303 and I never even made it to Grand Avenue before I was asleep.  I woke up as we were transitioning from the 10 to the 85 and I could feel the car squeeling around the curve on the ramp (okay, my embellishment, but when you're dead asleep, it sure feels that way), but then, 10 minutes later - asleep again.  I didn't wake up again until Yuma.

We stopped at Fry's in Yuma for petro and to make a deposit at the bank, then we were off again.  We got through Yuma and into California and once we went through the inspection station, I was out again and did not wake up until we were coming into San Diego.  I felt bad that Farmer Man had to drive the whole way after just getting off work, but at least he'd gotten a whole 8 hours of sleep before he went to work.  I had only gotten about 2.5 hours.  Plus, sleep makes Fatty Girl a Happy Less Ornery Girl.

We arrived at the hotel around 2 and checked in.  We had an ocean view room this time - by special request - and it was lovely.  It was on the north end of the hotel though and we'd requested the south end.  Oh well.  It was still ocean-side.  It was quite nice and breezy and still a little overcast but this is the view from our room when we first arrived: 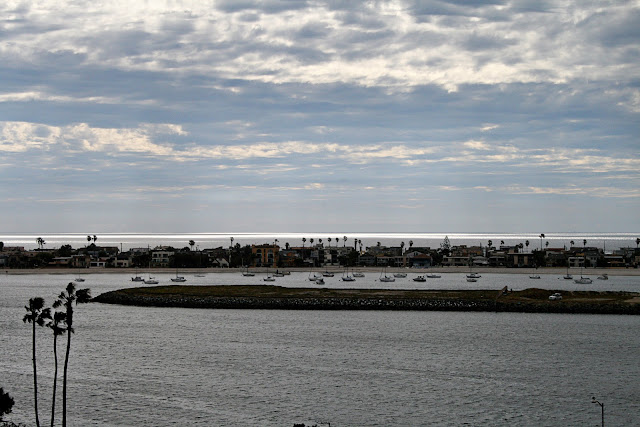 We hauled our crap up to our room and talked about what to do.  We'd planned to go to Hodad's for lunch, then to Filippi's for dinner, but it was late enough that we just decided to go to Filippi's for an early dinner instead.  That would alleviate the crowd at dinner time.  First though, we enjoyed the view and breeze some more...
So, finally, we decide to head out to Filippi's.  We get there and there are only a few people in the restaurant.  Normally, I like the hub-bub of the place being busy versus quiet and dead, but I was still a little ornery and tired, so I was actually happy that there were only 3 other tables of people in the whole place.  I began taking pictures with my phone and sending them to Jen to see if she could tell where we were.  Right away, she knew.
As we left, there was a homeless guy sitting on the ground outside the restaurant.  He asked if we would be willing to share our leftovers.  At first, for a split second, my heart dropped.  I've waited a whole two years to come here and eat this pizza.  We buy a large so we have leftovers to take back to the hotel and eat later or bring home with us.  But, as soon as those thoughts entered my head, they were immediately gone when I heard "I haven't eaten in days."  Now, I'm not sure if he was telling the truth or not, but he was pretty grungy so it was probably true.  I took 2 of the 4 remaining pieces of pizza out of the box and gave them to him.  Looking back, I guess I could have given all of them to him, but I think I still held on to the fact that he asked if we would "share" our leftovers, not completely give them up.  I imagine that if there had been two or three guys there, I probably would have given them the whole box, but there was one guy, so I felt okay about the way it turned out.  (As our trip continued, we noticed a LOT of homeless people...it certainly was something I began to think more about.)

What happened next was something so thought-provoking to me that I'm sure I won't be able to do justice to it by writing it down.

As I handed the man his pizza, he said "Thank you.  God bless you.  Really - May God bless you."  I told him he was welcome and I just turned to take the napkins that Melon Man had gone back inside for for me so I could wipe my hands off because they'd gotten kind of greasy handing the guy the pizza.  We got in the car and started to pull away and I looked over and the guy was gone.  Completely gone.  Couldn't see him in sight at all.  Even as we drove down the street away from the restaurant, I looked for him.  I looked for him in the alley just down from the restaurant.  He was nowhere to be found.  It was like he'd just disappeared.  It made me think...was this an angel who had been sent to test me?  Was I willing to share my sup with another in need?  I hope that I passed that test.  I ended up thinking about this the rest of the night and questioning myself as to if I was a good disciple of Christ in all things.

Normally, after dinner at Filippi's, we head up to La Jolla to go for ice cream at Baskin Robbins.  But this time, we were just too tired and too full, so we headed back to the hotel.  Once again, we sat out on the balcony and enjoyed the view.  The clouds were starting to come in for the evening and the wind was really beginning to whip around. 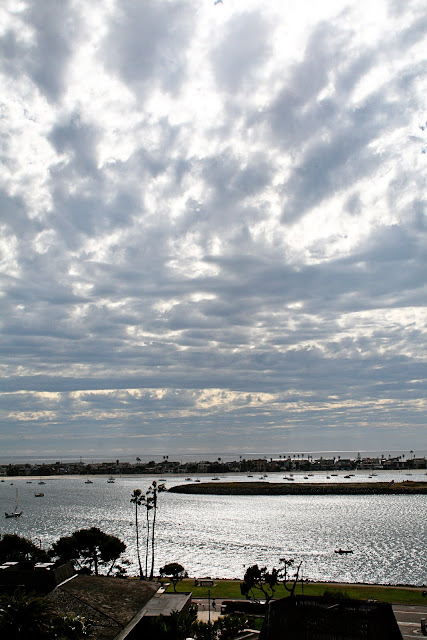 Soon we noticed a police car across the way on the little outjut into the bay.  Then, the sirens began.  Oh great, here we go again...someone is dead again and we're going to see it all from our hotel room. 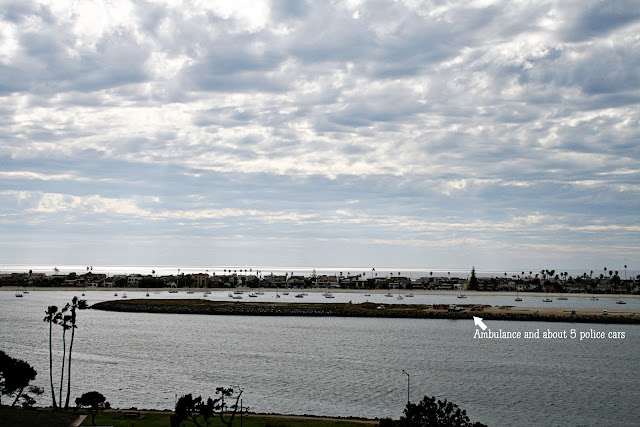 A big ladder fire engine and an ambulance arrived, along with 4 or 5 more police cars.  They were there for a good 30-45 minutes, then everyone left except for one police car.  We're not sure what happened, nor did we want to know.  We just hope everything turned out okay.

The skies started getting really gray and ominous.  I captured this picture of a plane taking off into the sky.  So big, yet so little in the grand scheme of things! 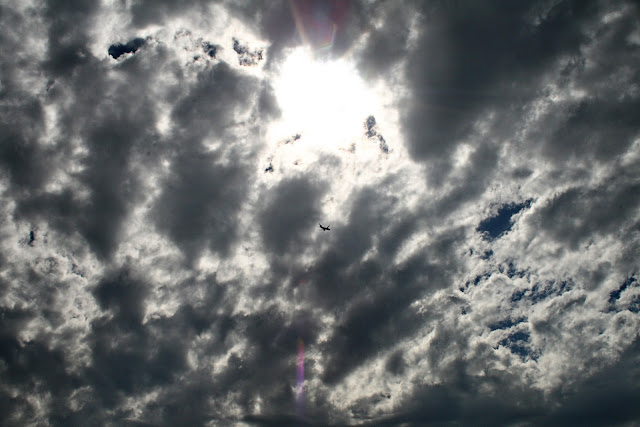 Farmer Man went in and laid down on the bed and I sat out on the balcony with my iPad and camera waiting for the sunset.  With all these clouds, the sunset was bound to be gorgeous!  I ended up wearing Farmer Man's baseball cap to keep the sun out of my eyes and to hold my hair in place and I got so cold that I finally put a blanket over me.  I sort of dozed off in the sunshine, but then I began shivering so bad that I went inside to wait out the sunset.  Um yeah, that didn't last long.  I fell asleep and totally missed it.  It was about 8 p.m. when I head Farmer Man get up to use the restroom.  I ended up going and climbing into bed too.  And that, is how our first day in San Diego went....

We did have some cool spring weather this week. It felt so good to us. Hope you enjoyed it too.

That was so sweet of you to not be heartless and share your leftovers with someone who probably needed it.