I am excited to start working on this project!  It is similar to doing indexing for the 1940 U.S. Census, but it is to index the U.S. Immigration and Naturalization records.  This is exciting because it will tell so many stories about people who have come to the United States to live.  I can't wait to start doing the batches...here in a few minutes actually!  It would be so cool to come across names that I've been working on.  We'll just have to see!  If you're interested in learning how to help, click here.

There was an opportunity to do a batch from a ship that came into New York, but it was so difficult to read the writing.  Maybe I'll try that one again in the future, but today I just wanted something simple, especially since I have three broken fingernails that are way down in the quick...OUCHY!!! 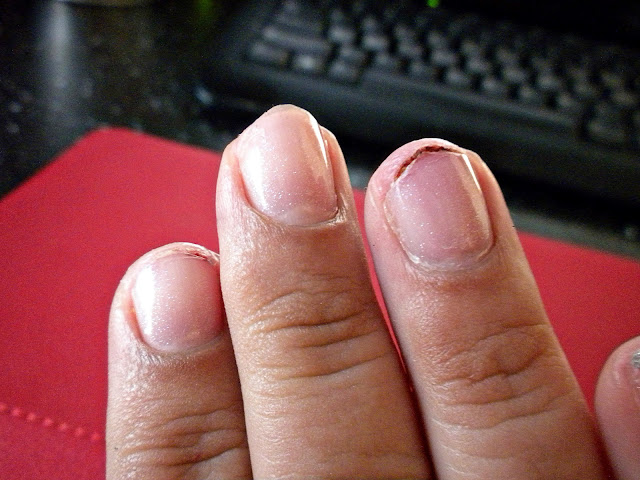 See, when Dolly was here last month, she and I went and got our nails done...just polish, no biggie.  I decided though, to have the gel polish put on.  It was 2.5 times the regular price, but they guaranteed me it would stay on for 2 to 3 weeks.  So, I said okay.  I REALLY liked it.  My nails looked awesome for 3 weeks.  Okay...that was going to become a bad habit for me...I figured it was only every 3 weeks so it was a nice treat that wasn't horribly unaffordable.  So, the day that I went to the cannery, I stopped at the nails place on the way home and got them done a second time.  I knew I should have been worried when the she-male (seriously...is that a girl or a dude?  I can't tell!) that was doing my nails again got out the Dremmel and started sanding the gel polish off my nails.  It didn't hurt, but holy crap...how much are you going to sand them and can't you just use nail polish remover?

So, the worker finally finishes removing the old polish and starts doing the new.  I'm cool.  I'm calm.  They fill in a small crack on my right ring finger nail with super glue.  They do all the gel, the polish, a thin silver glitter line, top coat, done.  It looks great, I pay, and I go home.  One week later, it looks like this...fine still, although I'm not liking the silver glitter lines anymore, they look just gray now...but, all in all they still look good. 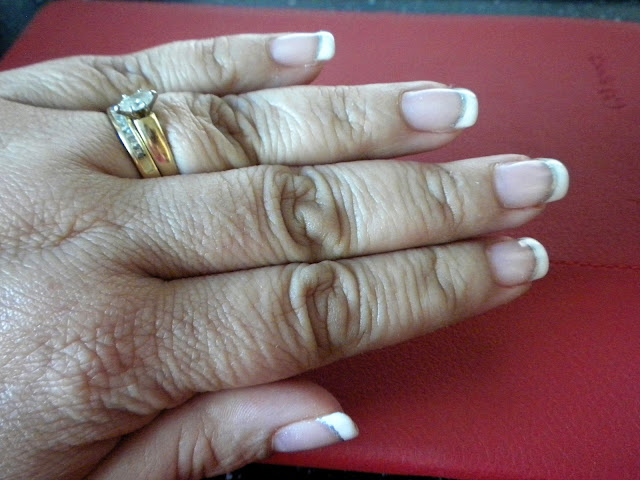 Either way, all is fine in the world until last Thursday night.  I'm packing a bag to take with me to Los Angeles for my little overnight trip and what happens?  All of a sudden my ring finger nail rips off!  OUCHY FREAKIN' HECK TO HANNAH BANANA!  Blood.  Pain.  Crap-o-la.  I had really wanted my nails to look nice for that trip.  Oh well, can't glue it back on and expect it to stay considering it just ripped off.  So, I bandage it up and press on.  Head to L.A.  Go to drive back and what happens as I get in the car after one of my stops?  Yep...I end up ripping off my right index fingernail too!  So now I have nail, no nail, nail, no nail, nail.  Lovely.  So pretty...not!  Then, I notice that the polish on my middle nail is cracked.  I don't see an actual crack in my nail though, so that's good.  However, this morning, yeah, what do I notice?  A crack!  So, I take the clippers to that sucka before it rips off on its own - which would have been horrible since that crack was WAY further down than both of the others and they are low!  Then, I ended up just chopping down my pinky nail too.  My two ripped nails still hurt badly and how I've managed to type this much is beyond me.  It's actually quite painful and I am not the type to complain about pain until it's REALLY bad.

So, besides the really short nails now, I've decided that I really don't like the gel nail polish.  It was softened my own nails to where they are kind of soft now...after only two times!  So, I guess I won't be having that done again...which, means I won't have to think about that expense either!  Funny how things work out like that!