When I was married to Mr. Spock, he would spend money left and right.  No wonder we ended up in the poor house, if you know what I mean.  I now attribute it to the fact that he was bipolar and he would do it when he was on one of his upswings.  Well, I am not bipolar, but I find that I do have cycles when I spend money...although not anywhere the amounts he would.  Mine are usually when I am down and I just need a little pick-me-up.  I think this week has been one of those times.

I went to Michaels the other night to get some something I needed for this year's Christmas Eve table.  I also had offered to pick up a ton of those little foam paint brushes for our Super Saturday leader since they were super cheap at twenty for just a dollar.  Well, of course, they didn't have the thing I originally went for, so I wandered around looking to see if they had anything else for Christmas yet.  After finding only 70 of the paintbrushes (I needed 100), I found the few Christmas things they already had.  I found this and that and that and this.  Suddenly, something kicked in and I wanted to spend, spend, and spend!  Bad girl!  I ended up only getting a few things, thank goodness.

Well, as I said, this week has been one of those kinds of weeks and I just needed something that would make me smile.

When Melon Man and I got married, one of the things that I didn't know was that he doesn't really care for Christmas so much.  What?!?!?  That was just not right.  I still have not quite figured out why since he loves the Savior and that's why we celebrate Christmas.  I have been slowly getting him to be more accepting of my love of Christmas though and he is actually quite helpful with the decor stuff like the lights on the house and such...well, except for getting out the little lighted up animated reindeer.  He stuck those up in the attic one year and I've never seen them since.  I doubt they're even up there!  Santa probably came one year and took them home with him because he was sad they were stuck up there in our horrible heat all year.

Anyhow, last year he surprised me when I came home late from work one night and the lights were all up on the house and glowing brightly for me when I got home at 11 pm that night.  It made me smile.

Now, let me tell you something about the lights on our house.  They are those big old fashioned C9 bulbs.  When we celebrated our first Christmas together, he told me he would put lights up on the house but they had to be those kind because that was what he liked.  So, I gave in because I wanted him to put some sort of lights on our house and because by doing the ones he liked, hopefully, that would help with the issue.  He agreed that the next year we could do icicle lights like I liked and we would switch off every year.

When the next year came along, well, the icicle lights went up, but so did those dreaded C9 lights again!  But you know, they actually looked pretty neat lined across the top of the icicle lights.  And so that is how we have done them the last few years.

One thing I forgot to mention about those C9 lights is that most of the bulbs he had were old and opaque -you know, the non-see-through kind.  Many of them had paint that had rubbed off of them and so the white light inside would show through the sections where there was no paint.  That sucked and looked ugly.  So, I bought a few five packs of replacement bulbs and we went on.

Year three came along and a number of bulbs had gotten broken so I went and bought more replacement bulbs.  Two years ago, I came home with a little flat of 20 five packs of TRANSLUCENT bulbs and this time we replaced all of the bulbs that weren't already translucent - which was most of them.  I finally started really liking those C9 bulbs!  What I didn't like last year was that the icicle lights had big chunks of dead lights and they looked bad hanging there all half-hearted-like.  I went to buy some new ones, but they were all gone by the time we decided to do it.  So, this year, I am throwing away the old icicle lights and getting new ones as soon as they are in the stores.

But...the best thing that will happen this year is due to arrive in the next few days!  And, every time I think about it, it makes me smile and it makes me happy and my sadness from this week goes away for a little bit.

I bought....250 of these....yes, TWINKLING TRANSLUCENT bulbs!  We are going to replace each and every bulb in our C9 strands with twinkling bulbs!  I can't wait to see them all twinkling.  It will be so beautiful! 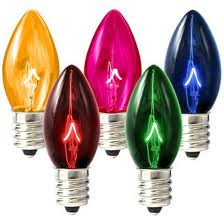