So Much to Do, So Little Time

I am still alive, just so busy trying to get everything done and ready for Christmas.  Where does the time go? It has just flown by since Thanksgiving.  Have a lot still to do and we don't even go all out - schedules just make it hard to get certain things done. 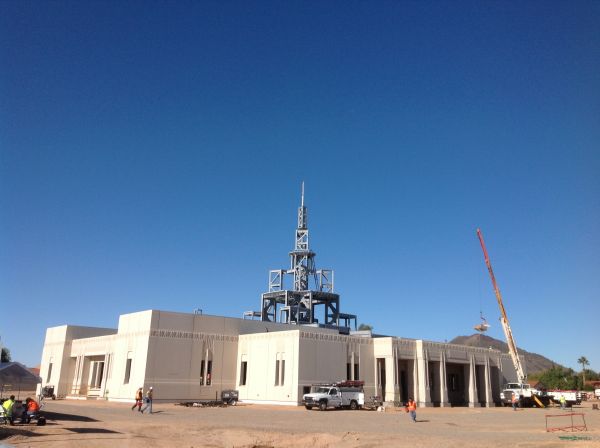 Just wanted to post a quick update on our temple.  This picture was taken on December 10th by Bill Burch of the progress they are making on the exterior concrete panels.  It's really coming along.  There will likely be another picture posted to the temple website today or tomorrow, but I'm not sure how much more will have been done as it has been raining here (amazing!!) for the last couple days.  Luckily, most of that was on the weekend though so I'm sure they got some good work done during the rest of the week.  I wish it was more accessible to just swing by on my way to or from work, but it's not.  Although it's way closer than the Mesa temple, it's in an awkward area and there isn't a quick direct route to get to it as in "swinging by."  So, for now, I just rely on the pics from the temple website.

On another note, Melon Man and I got to go to the Mesa temple this weekend with the youth.  As I was talking with one of the temple workers, I received an assurance that my desire to serve as a temple worker after our new temple is finished was a righteous desire and would be fulfilled.  My heart was at peace and it felt really good to know that I will be able to go to the temple on a weekly basis rather than just periodically.