Fell Off the Bandwagon Already

I knew it would happen...I would end up skipping a day or two. I just couldn't help it. After my post on Sunday about how messy the house was, I decided I really needed to take some action and make things happen. So, I got most of the dishes done and dinner made. Then, I did four loads of laundry. I only have two left, thank goodness! Earlier this year, we got rid of the plain white, 16 year old washer and 6 year old dryer that we had (both still in great working condition-sold them to people needing such items at a nicer price) and bought the new front-loading LG Steamwash washing machine and matching gas dryer. In red. Yum. I thought I would love doing laundry now - a red washing machine and dryer make the world go round - right? 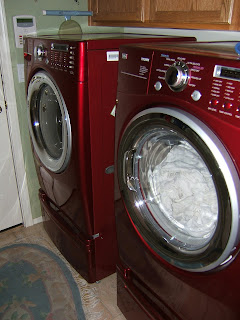 Anyhow, I hate doing it even more now! Why? I have no idea! It's definitely not the new machines - they are awesome. They are totally quiet. They do all the work for you - put the bleach and Downy in at the appropriate times, of course with the soap too. They can even be pre-set to turn on at a later time. They dry a FULL load of thick towels in about 15 minutes. What more can you ask for? But, I think the thing I don't like about them is that they are BIG. I can't reach into the cupboards above them without getting on a stool. Plus, where my laundry room is - it's a pass through area from the garage to the kitchen - their size lessens the amount of 'visible' room as you're going through the area. Now, if we had been able to sell this house and move into the new one, this wouldn't be a problem at all. But, alas, that didn't happen, so I am stuck with this small space. Oh well.

Well...got a little off topic there. So, on Sunday as I had written before, there were some good talks from the missionaries. Elder Reeves was speaking about why he came out on a mission. He gave the most beautiful reason. It wasn't to baptize the entire state of Arizona. It wan't to baptize the city of Surprise. It wasn't even to baptize a single person. He came on his mission to learn to love like the Lord, Jesus Christ. How special is that? Christ has the ultimate love for us and this 20 year old boy wants to love others just as he does. I definitely need to work on this in my own life. There are so many times that someone says or does something that I just get huffy and think well, I'll just not interact with that person anymore. Would Christ do that? No way. I'm going to work on changing that horrible habit in me.

Another thing that I noticed about Elder Reeves while he was speaking was that he was trembling while talking of the Savior. He was fighting back the tears and his cheeks were shaking. How beautiful that he feels that way about our Lord. I'm sure that those who were seated further back couldn't see all of this, but we were seated front and center on the second row. We were helping watch the Benson's kids while she played the organ so we had full view of each and every speaker. Let me tell you...that is THE place to sit. You pay so much more attention to the speaker.

Zach Kelly spoke next. He was talking about scripture study and said the most poignant thing. I totally had to write it down:

"If you don't do it, you're not just standing still, you're actually moving backward because Satan's power is working on you. It's like physics - there's always a negative force working against a positive one."

Wow. It's so true. I find that when I make a concentrated effort to read my scriptures everyday - before I go to work - that my ride to work is less stressed, my day goes better, my attitude is better, and I accomplish more. I was proud of Dad while he was here. He finished reading the Book of Mormon again. It was like a little game for him - to see if he could finish by Oct 15. He finished a couple of days early and actually started on the Doctrine and Covenants so he could get a jump start on next year's Gospel Doctrine lessons! I really need to start reading again in the mornings. I'm sure it will definitely help with the stress I seem to be experiencing lately.

This was how my Sunday finished up. Onto Monday now...

I feel your pain about laudry
It is amazing how two people can dirty so many cloths in a week, then add 1 kid and you can never keep up.
Ari is always wanting to change clothes because she is not wearing a dress or she hates if she got anything on it.
Good luck
Jodi Hurdsman