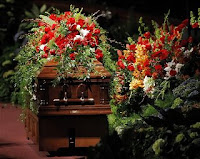 Today was President Hinckley's funeral. I watched it three times. I was so touched by the wonderful things people had to say about him and his life. The flowers were so beautiful - I told C that if I die before him, I want flowers on top of my casket, just like President Hinckley's. (I detest those standard floral spreads they put on top normally.)

What a wonderful man President Hinckley was. He devoted his entire life to the service of the Lord. I think about how often I make excuses about reading my scriptures, how I don't have the time to go visiting teaching this month, or why I climbed into bed without getting on my knees to pray first. Then, I think about President Hinckley and how even in his old and feeble body, he probably gloried in humbling himself before the Lord to give thanks.

President Hinckley wrote a book called Stand for Something. I've never read it, but I'm sure it would inspire me to be a better person...to stand a little taller, to look to the Lord more frequently for answers and help, to be less worldly and more willing to relinquish my life to God and the plan he has in store for me.

As I sat there watching the funeral get ready to begin, I noticed this scene...an empty chair where President Hinckley sat for all those years. It was a sad, empty feeling that came over me - but only for an instant. Again, as on the day he died, it was a sad, but fleeting moment, only to be quickly replaced by a joyful feeling that all is well and that peace abounds in heaven and within the organization of the church.

I watched President Monson with ferver as I knew of the heavy weight that was being laid upon him at this time - not only as President Hinckley's friend and the duty of leading the funeral service - but moreover, the new responsibility of leading the church that would eventually be announced. Although he had not yet been sustained as the new president, you could definitely see that the mantle had transferred and the weight of the new calling had fallen upon him. I've seen that same thing happen once before. I was once present when a new bishop was being installed in our ward. I KNEW in my heart and mind that this man was going to be made bishop even before it was announced. I had much disdain for this man and was quite upset that this was going to be my new bishop. I sat there in the congregation as they released the current bishop and in the few short moments between the release and the sustaining of the new bishop, I saw, with my own eyes, the transfer of the mantle upon this man. It was almost as if his hair sprouted a few new grays and his shoulders drooped with the newly added burden. I was taken aback by the things I had witnessed in just those few seconds. It was a confirmation to me that this man was chosen by God to lead that ward. (I still had issues for a while, but eventually got over them and apologized to him for my hostilities.)

As the funeral ended and the cameras followed the cortege to the cemetery, I was touched by the humility of all those involved. But even more so, as I watched this large family gather to say a final earthly goodbye to this great man, I was grateful that the cameras were turned off and the family was allowed to have private time with this great man one final time. I am sure that his family will be well blessed by his constant devotion to the Lord and their sacrifice of allowing him to give all his time to the service of the Lord.