The Origin of "Pickle Boy" 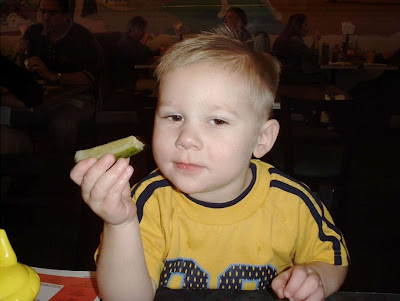 Many have asked where Dylan's nickname "Pickle Boy" came from. Pickle Boy is a LEGEND among diners of the famed Chompies Jewish New York Style deli in Phoenix, Arizona!

In the fall of 2003, Dylan came to AZ with his family to spend Thanksgiving with his auntie Kristin before we all headed to California to go to Disneyland over the long weekend. However, before heading out west, the family HAD to make a stop at Chompies for mile-high pastrami sandwiches. (By the way, these are the BEST pastrami sandwiches ever made in the history of pastrami!) 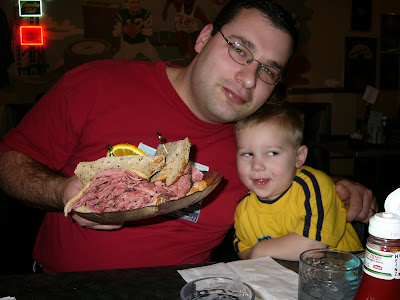 Well, like a mexican restaurant serving chips and salsa as a freebie appetizer, Chompies serves pickles. I never ever thought a two and a half year old Dylan would like the sour taste of a pickle, but he surprised us all! He just kept eating them, swirling each one in the juice on the plate, smacking his lips, and just smiling as he enjoyed one after another! 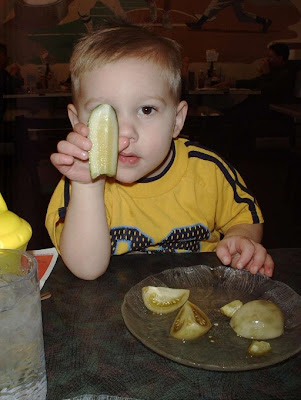 Nobody could believe it. From that time on, he's been called the pickle boy and for each birthday or Christmas, he always gets a jar of pickles from at least one person. This year for Christmas, he got 2 jars - one regular size and one HUGE jar! Angie will have to share the story of how she found a small piece of pickle wrapped up in a napkin in his room one time...it's super sweet!

Well, Okay! There IS a story there, and a very cute one at that! I wouldn't have thought about that--I was thinking it might have had something to do with 'Dyllie' (like a 'dill') pickle.....