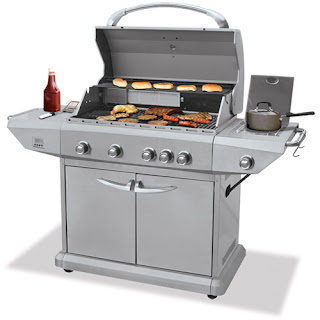 Clint's been eyeing a new grill at work lately. We agreed to meet up after he got off work and take a look.

Bless his heart...he was looking at the less expensive one...but when I got there and looked and touched, we decided to go with this one. It was about $50 more, but it's a better unit, I think. I am so GRATEFUL for his 10% discount! That made it only $15 more than the other one! It has more grilling space, more burners, infrared searing and heating, a digital thermometer and timer, and storage baskets underneath in the cabinet part. I was so nervous driving home with it in the back of the truck. He'd tied it down really tight, but I was still nervous!

We had the missionaries scheduled for dinner at five, so we raced home to meet them and when they finally arrived, we told them they had to work for their dinner this time. We had them help get the BBQ out of the truck and help carry it to the backyard. They thanked us for letting them provide service - they said it's rare they get to do that. This BBQ is SO much bigger than the old one! We also bought a rotisserie for it...C loves to rotisserie stuff and I made him throw out his old box rotisserie, so hopefully this will be great for him. 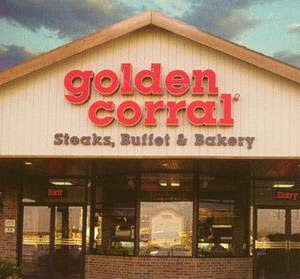 After they put the grill on the patio, we took them out to dinner at Golden Corral. It was a late start cleaning day with Holly today and I hadn't finished doing some other things around the house yet so we just used our GC coupon from the paper and took them out. I liked it because I didn't have to do any dishes, I didn't have to make any food, and they could eat whatever and how much ever they wanted.

After we were done, we came back and they shared a nice message with us. One of them, Elder Clark, has been to our house for dinner before. He leaves to go home in less than two months. His new companion, Elder Bramwell, has only been out 3 weeks and is still very "green." He has a lot to learn about representing the church and Elder Clark even had to tell him to quiet down. They are both from Idaho, amazing enough.

After they left, C and I watched Everybody Loves Raymond and now we're going to bed. We are both exhausted. He worked today and and I got up at 5:30 right after he left for work. I didn't work nearly as much or hard as what he did, but the heat was up today and it just sucked the life out of me.

So cool to get a shiny new BBQ! (wow that rhymed, lol) So sweet of you to take the missionaries out to dinner, probably such a treat for them! You are Clint are so great! I love ya girlie!

Thanks for the information about the plate, and the bbq is great. You guys will really enjoy it.

Sounds like a fun day. Congrats on the grill Clintamous! Wish we could drop by and have you grill us up some viddles.