It's Freezing Here! Well, Not Really Freezing, But It IS Cold(er)!

Clint is always telling me that the signs of the times are starting to appear more rapidly. This week, I really believe it. It was 110* on Monday and today, it was in the 50s until late afternoon when it finally peaked around 63*. It's been rainy all day. It's been a lovely day! But wait, this is MAY - the END of May no less. It should be over 100* every day by now. My A/C should be running full force...but it's not...and I am SO GRATEFUL for that! For those of you who don't know or don't live here in "sunny Arizona", electricity is very expensive in the summer. They actually jack up the price per kilowatt and your bill actually doubles, triples, or quadruples depending on your usage and time of usage. So, I will gladly take the cooler weather any day. Although...I do have somewhat of a sore throat now!

Today was a short day at work. I took my employees, Jackie and Tina, and my boss Steve, and we went out for lunch to Olive Garden, then to As You Wish for some recognition time. They are so helpful and work very hard everyday and I don't often let them know how much I appreciate them so this was a good time for Steve and I to show them. As You Wish is a pottery painting place. You pay a studio fee that covers all of your paint, studio time, and glaze and firing. Then, you just pick out the piece of pottery that you want to paint, pay for it, and then paint it. In 3 days, you come back and it's all fired and ready for you to take home. It was a lot of fun seeing everyone's different projects. Jackie did a picture frame with her niece's name on it. Tina did a plate in the shape of a star with SuperGirl art on it (she's very into pink and SuperGirl), Steve did a Dad's BBQ platter, and I did a floral platter. Here are a few pictures: 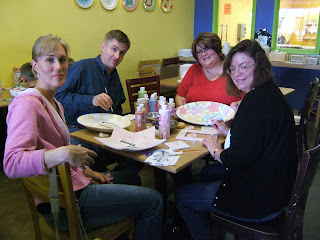 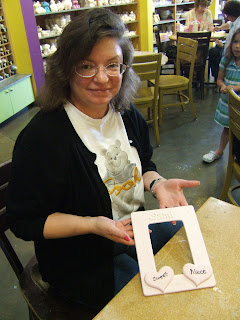 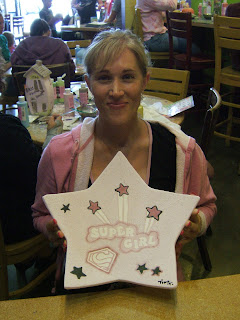 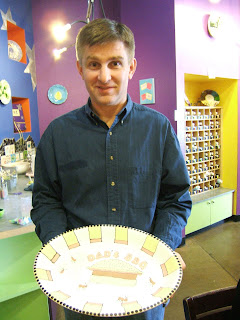 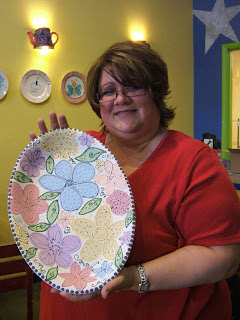 After we were done painting, which took about 2.5-3 hours, we got a Jamba Juice (YUM!), and then I dropped everyone off at their cars back at work and they got to leave early for the day. It was a great day and we had fun. It was nice to see Steve be "human" and get frustrated when he'd mess up because we always see him in his boss mode where he doesn't really show any emotions. I'm lucky in the sense that he does periodically share them with me and the rest of the Senior Staff, so I know he's human - most of the time!

Started heading home and got stuck in a mess of traffic unrelated to the holiday leavin' towners. Took at least an hour to get to the railroad tracks (yes, I live on the other side of them). Stopped at the bead store to buy some crimp beads since I am out of them and made it just as they were locking the doors. Yay! One less thing to do tomorrow!

C and I have been waiting for Denny's to open out here in our "little" town and so I bopped up there to see if was open yet and it apparently just opened on Wednesday so I called C and he met me there for dinner. We have been trying to do dinner at home lately to help reduce expenses and we have been so good since last Saturday that this was our treat and it wasn't overly expensive since it was Denny's. Tomorrow, back to crockpottin' though. I have a pork loin roast that I'm going to cook. The recipe is called Tangy Slow Cooker Pork Roast and I got the recipe from Mama Jo on the Beth and Bill show on the radio in the morning. It sounded really good, so I thought I'd try it. Lisa - I'll let you know how it turns out!

Hi Kristin-- Let us all know how the dinner turns out and then post the recipe. I'm ALWAYS looking for new ones like that. Keep up the good work with the crock pot. Once you get the hang of it it will be really easy for you.

Oh, and the ceramics are great. So fun. Your platter is gorgeous. We have a place similar to that out here called Color Me Mine. I think I'll go check it out now. What a great idea to go there with your associates!