Guilty! It's About Time! 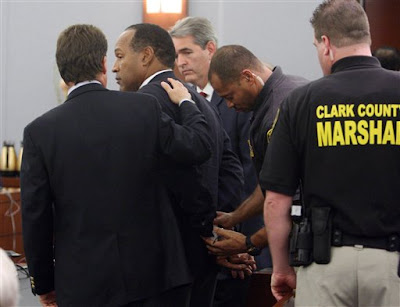 Woke up this morning to see the headlines that OJ Simpson was found guilty on all 12 counts he was being tried for. It's about time! He was so totally guilty in killing his ex-wife and her friend. Even just this week, his former sports attorney admitted helping him get out of being sent to jail for that 13 years ago. Now, he has the likelihood of spending the rest of his life in jail for these new charges. It's ironic that he was found guilty of something far less heinous than murder exactly 13 years to the day that he was acquitted in that trial. And this is all the time and space he deserves so I'm done with this entry!

What goes around comes around. Glad to see you that you have posted.