Sometimes It Has to Get Worse Before It Gets Better 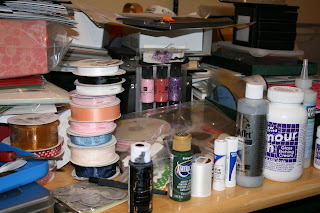 Oh my...what was I thinking? Jennifer - you're just going to have to stay in a hotel! It's like the room exploded! There is stuff EVERYWHERE now! It totally looks worse than ever before!

I spent a good 8 hours in there yesterday and, seriously, I don't even want to go back in. There is so much stuff everywhere that I feel lost. In cleaning, you have to organize, right? That's the part that takes so much time. If it was a matter of just walking in and putting stuff right back into its spot, that would be one thing, but it's not. I admit it...I have become a scrap-crap-a-holic! I have way too much stuff for a craft I haven't had time for in 3 years.

I don't want my sister to have to stay in a hotel, so I guess I'm just going to have to force myself to go back in this afternoon after church. Before I do though, here are some pictures of just how bad it is! 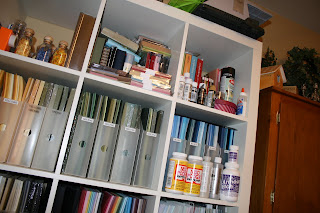 Crafting "stuff" just shoved in the monster where all the paper goes. Paint, modge podge, etching cream, etc. does NOT go here! 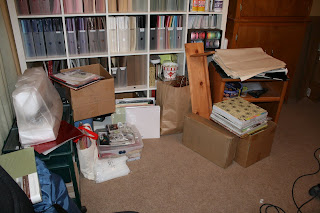 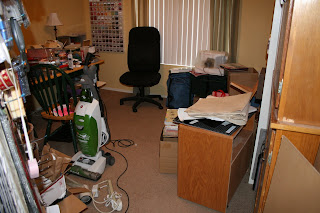 Look. Everything migrated from the left side of the room over to the right with some of it staying behind. I guess it feels comfortable there and doesn't want to go to the other side of the room. 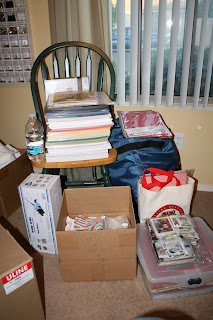 Really, I'm TRYING to sort into piles. This is my pile of cardstock and miscellaneous other things. So, I guess I've really only got one pile so far. 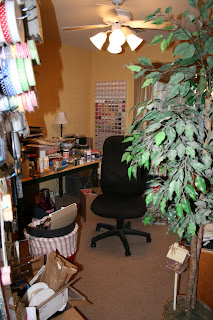 A little bit ago you could barely even get into the room. The tree had even jumped to the other side of the room. It finally found its home again, but I was worried for a while. 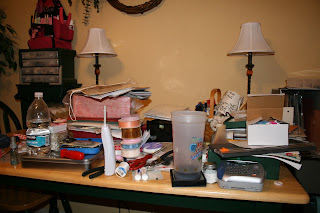 This is how the desk is coming along...finally the stack is less than 12 inches high! This really is a big improvement from how it was!

Yes I want to see how bad it got! And I thought I was bad. I bet between the both of us we could open a store with ease.

I want to SEE! Then I won't feel so bad about my bedroom table! Plus you have good organization ideas and I want to SEE how you went from chaos to put together.