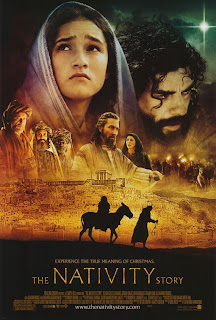 Have you seen this movie? I watched it tonight while working on a Christmas present. I was so touched by it. It was so amazing.

I had heard that when the makers of the film were filming, they wanted it to be as realistic as possible, so they filmed on location where they could. I never realized that the journey from where Mary and Joseph lived, back to Bethlehem was so treacherous. Back then, they wore sandals, as we know. Could you imagine walking over 100 miles each direction in sandals? There is one point where it shows Joseph sleeping against a rock by the side of a river. Mary wets her scarf and washes his bleeding and dirty feet. It made me think of when the Savior washed the feet of His disciples 30 some years later, before He went into the Garden of Gethsemane. I think of the service C does for me in taking care of my feet lately.

I was really touched by this whole movie. It will surely become an annual movie for me to watch. If you have the opportunity to see it, do.

Yes,it's a good one! Your Christmas Spirit meter is going up!!!